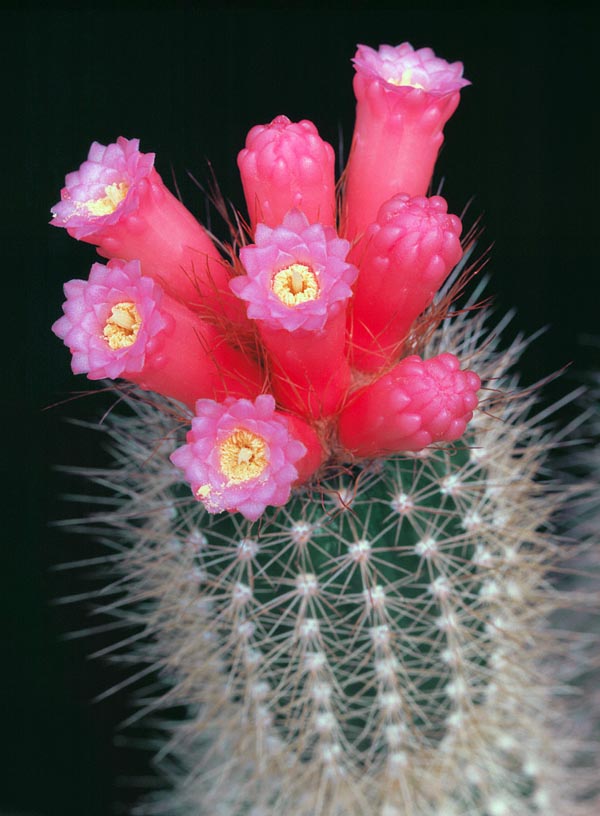 Arrojadoa rhodantha has even 2 m long stems with 4 cm diameter. Bright flowers and fruits but fears cold and humidity to roots. Needs partial shade and perfect drainage with sand and rubble © Giuseppe Mazza

The genus is honoured to the Brazilian engineer Miguel Arrojado Lisboa (1872-1932) for his botanic explorations of the semi-arid regions of Brazil by the beginning of the twentieth century; the name of the species is te combination of the Greek words “rhodon” = pink, and “anthos” = flower, with obvious reference.

Plant with ramified cylindrical stems, mainly at the base, initially upright, then procumbent, up to 2 m of length and of 2-4 cm of diameter, with a dark green epidermis. The stems have little prominent ribs, in a number varying from 10 to 20, with small areoles spaced by no more than 1 cm, provided with thorns, initially of yellow to brown colour, tending to the white while ageing. The 5-6 central thorns, are rigid and long up to 3 cm, whilst the even 20 radial ones, are little longer than one cm.

Each segment upon the end of its growth produces on the tip a pseudo-cephalium with areoles provided with brown down and reddish-brown bristles; from these apical areolae develop, in groups, the diurnal flowers, tubular, long up to 4 cm and 1,2 cm broad, waxy and with a colour from pink to purple red, with the lower part of the tube without scales. By the end of the blooming, the growth can resume till the creation of a new pseudo-cephalium, therefore, in the same vegetative season there can be several blooming with the circular traces of the pseudo-cephalia which indicate the beginning and the end of each single segment. The fruits are oblong, about 2 cm long, of red colour, ending with the dry remnant of the flower, and contain several small black seeds. It reproduces by seed and by cutting.

Very characteristic plant and of easy cultivation provided we keep in mind the requirements of the plant which are coming from its habitat. It prefers a slightly shaded position and particularly draining and porous soils, as it is much sensitive to radical rottenness, soils which may be formed by common fertilized garden earth and for the remaining part, in equal quantity, by river sand and crushed dust-free grit.

It is little resistant to the low temperatures, as it can stand, if dry and for a short time, temperatures as low as about -1 °C; its best location, in open air, where the climate allows it, is in “desert” gardens along with other xerophytes; elsewhere it is to be cultivated in possibly small and earthenware pot, with the same modalities as before stated. In summer, during the vegetative period, it is to be regularly watered, but allowing the soil to dry up completely before watering again, in winter it is to be kept dry and at temperatures not lower than +10 °C.

In order to avoid the risk of rottenness, it is often engrafted on more resistant plants, in particular Echinopsis spachiana or Opuntia tomentosa.

This plant is inscribed into the appendix II of the CITES (plant for which the trade is controlled at international level).