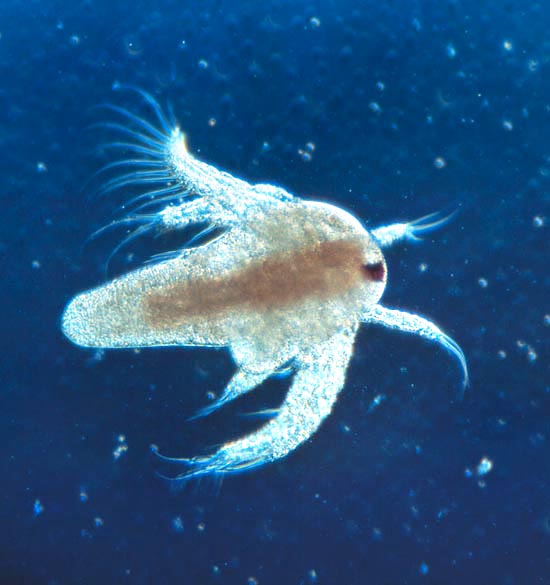 The Artemia salina, Linnaeus, 1758, which occupied in the magazines of the seventies and eighties of the last century various advertising spaces (under the name of sea monkey), in which were praised its miraculous powers allowing it to rapidly transform, when in touch with the vital element, into a sort of a small proto-humanoid monkey, is nothing but a small salt-water crustacean.

This invertebrate is afferent to the phylum or type Arthropods (Arthropoda), subtype Antennates (Antennata), class Crustaceans (Crustacea), subclass Branchiopods (Brachipoda), order Phyllopods (Phyllopoda) for some taxonomists it is, on the contrary, that of the Anostracans (Anostraca), family Branchiopodids (Brachipodidae), genus Artemia.

The Artemia salina is a cosmopolitan crustacean which is fished and used by the indigenous populations of the Sahara.

It is frequently utilized also dried or lyophilized or alive, as food for the aquaria fishes or in the context of the zoological gardens where it is sown in the artificial salt ponds or in the saltwater marshes, which host the various species of flamingoes, spoonbills, etc. who eat it.

Despite being a primitive crustacean, it has, as we shall see, some peculiarities interesting from the genetic and physiologic point of view.

Just for information, among the most ancient forms of the order of the Phyllopods (Phyllopoda), we find Branchipus schaefferi, which can be found under the snow in the pools of water.

Usually, the Branchiopodids (Brachipodidae) live in freshwaters, with a variable grade of purity and temperature depending on the species. For instance, the species of the genus Branchipus, love temporary pools of water which rend to dry up in the summer months, whilst the species Eubranchipus vernalis, lives on the humid banks of the ditches and of the ponds.

An exception is the Artemia salina, typical euryhaline (that is capable to adapt to waters with different salt concentrations, please refer to → Fishes), which requires particularly salted environments, such as salinas or coastal waters presenting salt concentrations bigger than those of the sea, or in the salt lakes, like those present in various areas of the Sahara desert.

The body of the branchiopodids, of small size, is characterized by the absence of carapace, typical dorsal shield, characteristic of the more evolved crustaceans. In the Artemia salina as in the other Branchiopodids (Brachipodidae), are clearly distinguishable a cephalic region as well as a thoracic and an abdominal ones. The head has two pairs of antennae: the first (primary) antennae are small and usually not segmented; the second antennae (secondary) are different in the male and in the female. The female’s ones are cylindrical, the male’s ones are enlarged, with locomotory and prehensile function; this forms a dimorphism character. 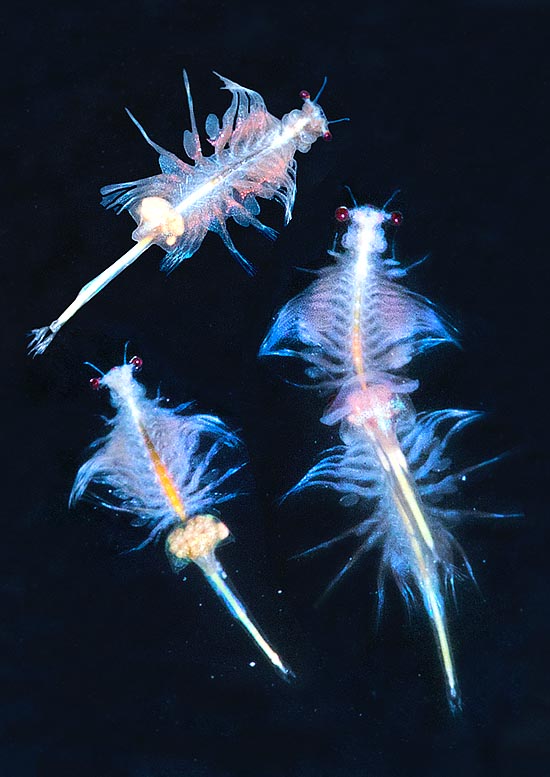 Ventrally and dorsally seen females with eggs, and a mating © Giuseppe Mazza

The compound eyes are pedunculate; in the Artemia salina is present, on the contrary, a simple pedunculate eye.

The trunk is formed by 19 segments, of which the first 11 do carry the limbs. The limbs are bifid, with a foliaceous look; they have branchial appendages and are kept rigid by the pressure of the inner liquids. They serve for moving, or, in the case these crustaceans allow themselves to be passively transported by the current, for determining a flow of water to the gills and the mouth, thus favouring the input of food, plankton and protozoa.

The first two of the five abdominal segments are merged together and carry, in the male, the copulatory organ and, in the female, an incubating pouch. The last abdominal segment ends in two flattened expansions. The circulatory system is lacunar: the heart is formed by a pulsating dorsal vessel, which, through the ostia, collects the blood from the peripheral regions of the body and despatches it to gills, formed, as mentioned before, by laminar expansions of the limbs.

The nervous system is formed by a gangliar chain formed by a double row of ganglia, united together, horizontally, by commissures and, vertically, by connectives. The excretory organs are represented by two maxillary glands which have the opening g at the level of the “second” maxilla. The food, or digestive, duct is composed by the mouth, a pluri-lobed stomach, an intestinal front tract, and by the real and proper terminal intestine.

In the Branchiopodids (Brachipodidae) are present the reproduction with distinct sexes (gonochoristic) as well as the parthenogenetic one. The eggs, in a number varying depending on the species, are incubated (therefore, also in the Artemia salina), for a certain time into the incubating ovigerous pouch the female has at the level of the fist two abdominal segments.

Typical is the formation of “resisting” eggs which are later on fecundated via amphigony by a sperm per egg, these have a hard shell and more yolk (which allow it to survive without developing, in adverse conditions, for more or less long periods), than the so-called subitaneous eggs, produced via parthenogenesis in the incubating chamber of the female, which eggs, after an adequate chromosomal balancing by meiosis has occurred, begin to segment and to give an embryo without the intervention of the fecundation through a sperm; this second type of eggs does not have a rigid shell and has a lesser quantity of yolk than the resisting ones.

The Artemia salina produces resisting eggs capable to resist to remarkable changes of temperature. Whilst this crustacean has a particular form of parthenogenesis, called “automictic” or diploid. This phenomenon consists in the marked subdivision of the chromosomal patrimony during the maturational division of the egg.

The diploid forms with 42 chromosomes form a particular race or subspecies with a particular geographical localization; they are present at Cagliari, Sevastopol – Ukraine, and Cadiz; in addition to this geographical race, they have localized other parthenogenetic races with 84 chromosomes, at Koper -Slovenia, Margherita di Savoia in Apulia, in Algeria and even parthenogenetic octoploid forms with 168 chromosomes, always at Margherita di Savoia – Apulia.

After the eggs hatching, a larva, called “nauplius”, gets out; it is equipped with an eye simple and not paired, and with three couples of limbs corresponding to the first antennae, the second ones and to the jaws. From the nauplius comes the metanauplius with the body gradually extending, then, with a series of successive steps taking place in a period variable depending on the species, we get to the adult individual.

For IUCN, this quite fascinating invertebrate is not at all endangered.

→ To appreciate the biodiversity within the CRUSTACEANS please click here.