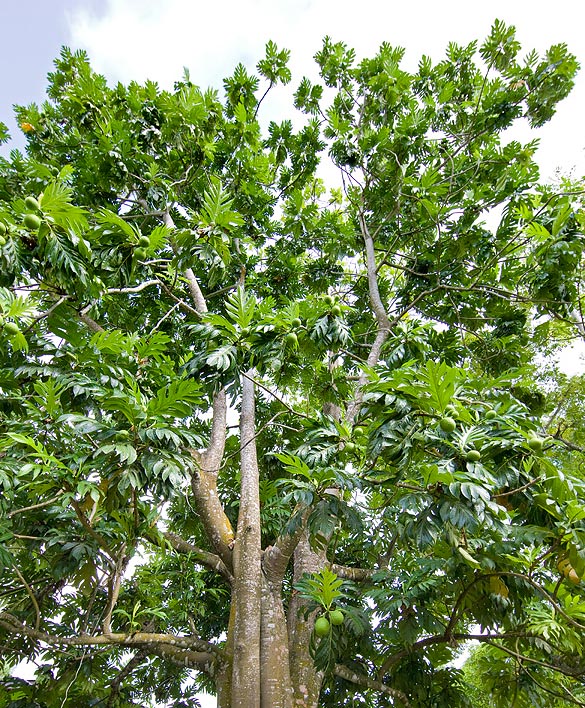 This species is native to Indonesia, Micronesia, Papua New Guinea, Solomon Islands and Vanuatu, where it grows in the humid forests from the coast up to the mountain slopes.

The name of the genus is the combination of the Greek terms “artos” = bread and “karpos” = fruit, with reference to the taste of the fruits after cooking.

The name of the species is the Latin term “altilis” = big, with reference to the size of the fruit.

The Artocarpus altilis (Parkinson ex F. A. Zorn) Fosberg (1941) is a fast growing, much ramified, evergreen tree, semi-deciduous in case of drought or in the dry period of the monsoon climate, up to about 25 m tall with a diameter of the trunk of 0,3-1,2 m; all parts of the plant contain a gummy white latex.

The leaves, on a short yellowish petiole, are ovate with more or less indented edge in 5-11 pointed lobes, of glossy dark green colour on the upper page, and pubescent below, 20-70 cm long and 20-50 cm broad.

The new leaves are enclosed by stipules (appendages at the base of the leafstalk which have the main function to protect the leaf during the initial phase of growth), caducous, lanceolate and 10-25 cm long.

The inflorescences are axillar, unisexual, present on the same plant (monoecious species), carrying a multitude of tiny flowers, the male ones appearing below the female ones, thus enhancing the cross-fertilization; the flowering and the fructification is practically uninterrupted at the Tropics. 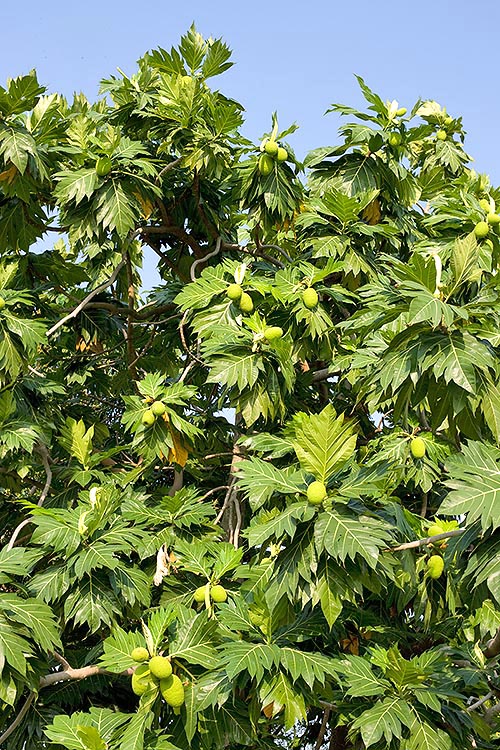 The male inflorescences are pendulous racemes of an almost cylindrical shape, 12-30 cm long and 2,5 cm of diameter, with yellowish flowers, 1,5 mm long, bilobed calyx and one stamen.

The female inflorescences are globose or ellipsoidal pale green racemes, of about 6 cm of length and 4 cm of diameter, with flowers, 1500-2000 per each inflorescence, tubular, about 1 cm long with a diameter of 1,5 mm; in the varieties without seeds, the female flowers are sterile; in fact, there are two typologies of varieties, those with fruits containing seeds and little pulp and those with seedless fruits, which are the most cultivated species.

The fruit, on a 2-12 cm long peduncle, is a syncarp (whole of several fruits grown in the same time and linked together) of variable shape, globose, oblong, cylindrical or piriform, with thin, initially green, then greenish yellow or brown yellow “skin”, when ripe, of 10-45 cm of length, 5-30 cm of diameter and 0,2-4 kg of weight.

In the fruits with seeds the surface is covered by conical tubercles similar to thorns, in the seedless ones it is almost smooth with the traces, usually hexagonal, of the single fruits.

In the unripe fruit the inside is white, rich of starch, firm, in the ripe ones; it is morbid, fragrant, of cream yellow colour. The seeds are ovoidal, about 2 cm long, of brown colour.

It reproduces by seeds (obviously, the first group varieties), which is to be planted in short time, as it has a germination capability lasting a few weeks, the same happens after about two weeks and the beginning of the fructification takes place when the plant is 8-10 years old.

For the seedless varieties, they usually utilize the root shoots, to maintain constantly humid and in the shade till complete rooting, with beginning of the fructification after about 5 years. Less frequently are utilized the air layering and the root cutting, using 15-30 cm long portions horizontally placed under the surface of the substratum, mostly sandy and constantly kept humid, or inclined with emerging terminal part.

The Artocarpus altilis requires a strictly tropical climate with high humidity, more than the 70%, and more than 2000 m of rainfall, regularly distributed all along the year, exposition in full sun and deep soils, fertile and well drained; temperatures lower than +5 °C may aver lethal.

The fruit is one of the main sources of carbohydrates of the Tropics, and is also of a good source of proteins, fibres, calcium and vitamins A and B, and has played a major role in the survival of many populations of the Pacific islands. 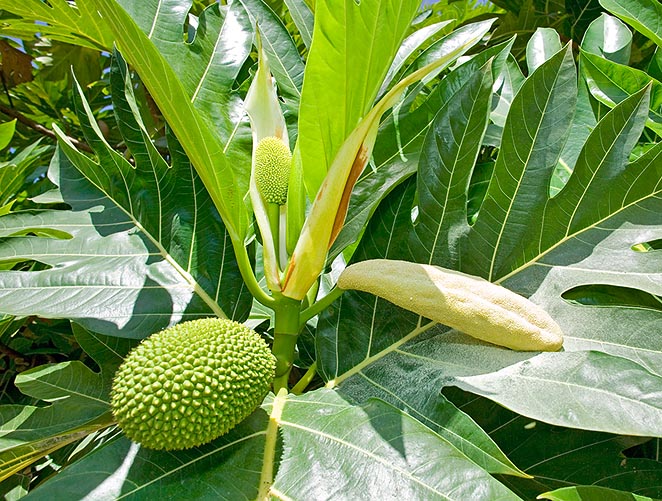 Rich of starch, calcium and vitamins A and B, they have always been valued for human food © Giuseppe Mazza

The ripe fruits are consumed raw, even if many varieties have laxative effects, or cooked in the oven, candied or dried and prepared in various ways depending on the local cuisines; the unripe ones, rich in starch, are consumed cooked, boiled or roasted and variously dressed, as done for the potatoes. The seeds, boiled or roasted, have a taste similar to that of the chestnuts.

The leaves are locally utilized as fodder and the wood, of reasonable quality, light but very resistant and elastic, is utilized in the constructions and in the fabrication of boats, furniture, packaging and of everyday objects.

The latex, mixed with coconut oil, is utilized for render watertight the keels of small boats.

All parts of the plant are utilized in the traditional medicine for various pathologies.

Finally, it is also a tree of great ornamental and landscape value due to the big and glossy leaves and the fruits; it is, rightly, considered as one of the most representative of the tropical flora.