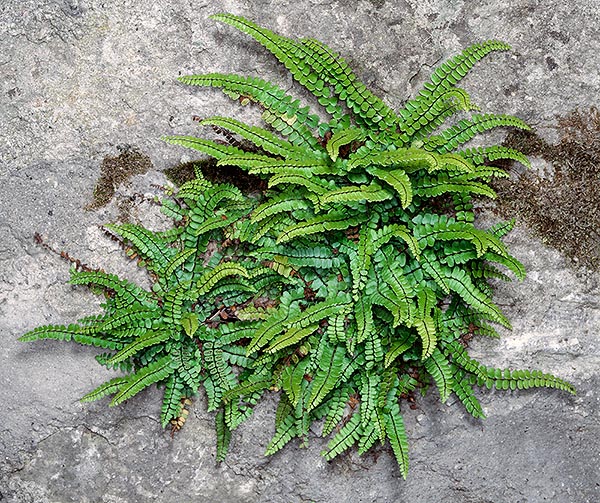 Asplenium trichomanes is widespread in Europe, especially in shaded and moist places. Since this small very nice fern lives on rocks, stony walls or grounds, it is described as saxicolous © Giuseppe Mazza

This small fern was named Asplenium trichomanes by the Swedish naturalist Carl Linnaeus in the 18th century.

In French, many names have been used to refer to it, such as “Capillaire”, “Faux capillaire”, “Capillaire rouge”, “Doradille polytric”, “ Polytric des boutiques”, “Asplénie polytric” or “Cheveu de Vénus”. This high number of different names can sometimes lead to confusion.

Indeed, other languages do not have as many names to refer to this species or, if they have several names, these names are not necessarily translations. For example, in English, this species is called alternately maidenhair spleenwort (most common), common spleenwort, English maidenhair, green spleenwort or waterwort.

It is in ancient Greek that we can find the etymology of Asplenium trichomanes. In Greek, the word “asplênon” means remedy for the spleen; some ferns of the genus Asplenium were used in ancient Greece to fight spleen’s diseases. As for the term “thricos”, it means hair and can be related to the appearance of this species during the winter.

This fern is a cespitous hemicryptophyte. What does it mean? The term “hemicryptophyte” means that the aerial part of this plant will be replaced every year. The vegetative points, consisting of embryonic cells (capable of mitosis), are located at ground level. As for “cespitous”, it indicates the fact that Asplenium trichomanes grows in compact tufts. 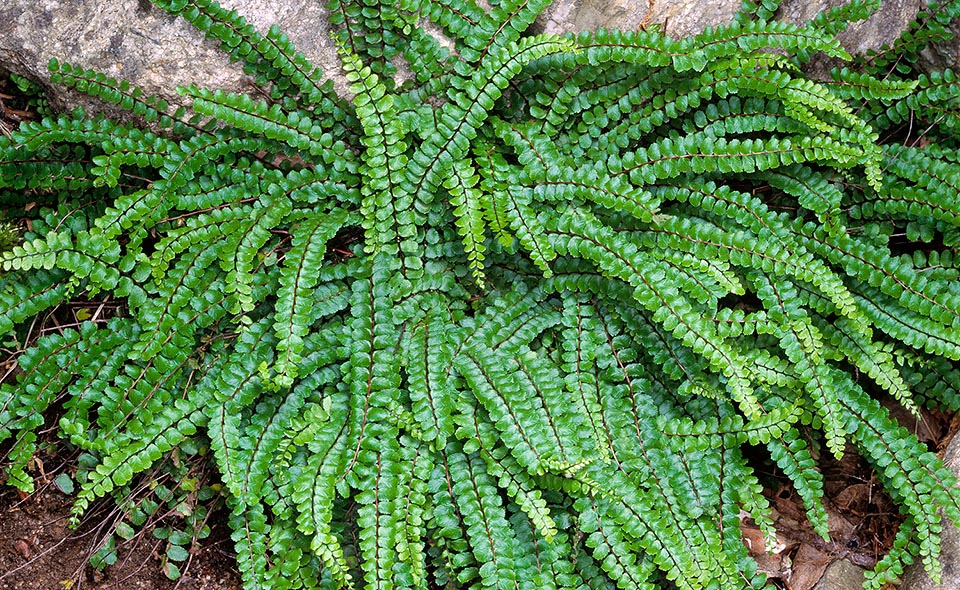 The fronds of Asplenium trichomanes, which are replaced each year, measure from 10 to 20 cm. After the fall of the leaflets, the rachis (erected solid midribs) form a cluster that inspired the etymology of the scientific name, of the Greek term “thricos” which means hair, for the look of this fern during winter © Giuseppe Mazza

The leaves (called fronds) generally measure from 10 to 20 cm and are organized in small persistent tufts. 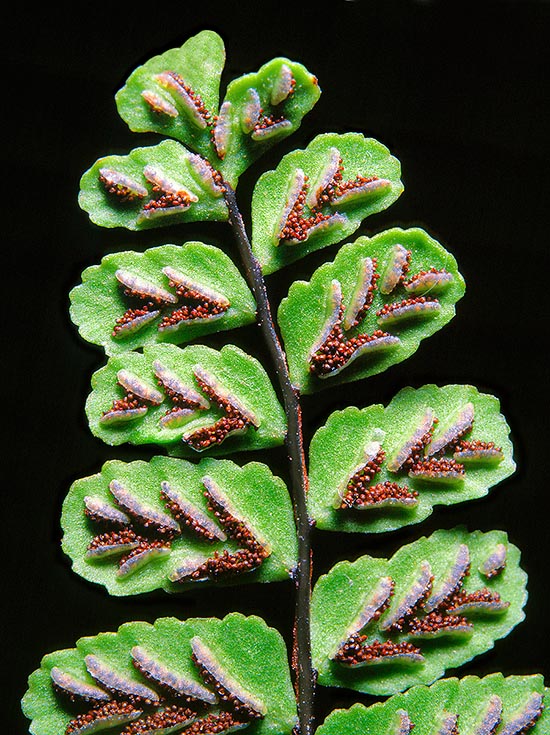 The sporulation takes place from May to September. The fronds possess medicinal virtues © Giuseppe Mazza

The rachis (i.e., the midrib of a frond) are hard. After the fall of the leaflets, the rachis belonging to the same tuft form a drawn up stiff hairy cluster.

Let us now examine the fronds a little more closely.
Asplenium trichomanes ‘ fronds are pinnate, composed of small oval segments called pinnae. The pinnae are opposite and finely crenate. One can notice on the lower side of the fronds that the sores are linear and close together, with a side indusium.

Sporulation takes place from May to September. The spores are dispersed by the wind. This kind of dispersion is called anemochory and Asplenium trichomanes is thus an anemochorous plant.

Considering its habitat, one finds this species in particular on walls, rocks, slopes, etc. Since it lives on rocks or in stony grounds, this fern is described as saxicolous.

Asplenium trichomanes thrives on some substrates such as sandy soils, limestones (for example, chalk), clay or loam. For the plant to develop, the soil’s pH will be alkaline (i.e., greater than 7 on the pH scale) or neutral (pH equal to 7).

Asplenium trichomanes is widespread throughout Europe, especially in shaded and moist places.

As we have seen, the Ancient Greeks had already a medicinal use of Asplenium trichomanes to cure spleen’s diseases.

Several centuries later, in England, there is a testimony of medicinal use in the book entitled “A Modern Herbal” written in 1931 by Mrs. Grieve, herbalist. We learn there that Asplenium trichomanes entered in the preparation of a tea with emollient properties. Moreover, the expectorant properties of the fronds made the tea useful in the treatment of lung problems. Also according to the writings of Mrs. Grieve, on the Isle of Arran, off the coast of Scotland, the fronds were dried and used instead of tea for their laxative properties.

Alongside its medicinal use, it has been reported that over the centuries Asplenium trichomanes was also used in witchcraft.