The Astrophytum myriostigma Lem. (1839) is native to the tablelands of central and northern Mexico (states of Coahuila, Nuevo Leon, San Luis Potosi and Tamaulipas), more frequent, in particular, in the desert of Chihuahua, where it grows on calcareous rocks at around 1.500-2.000 m of altitude, often associated with Cylindropuntia leptocaulis.

Much variable, rather slow growing plant, solitary and rarely cespitose, globose with a quite depressed apex when young, then cylindrical, up to 70 cm of length and 25 of diameter, even if, in cultivation, it rarely exceeds the 25 cm of height and the 16 cm of diameter. 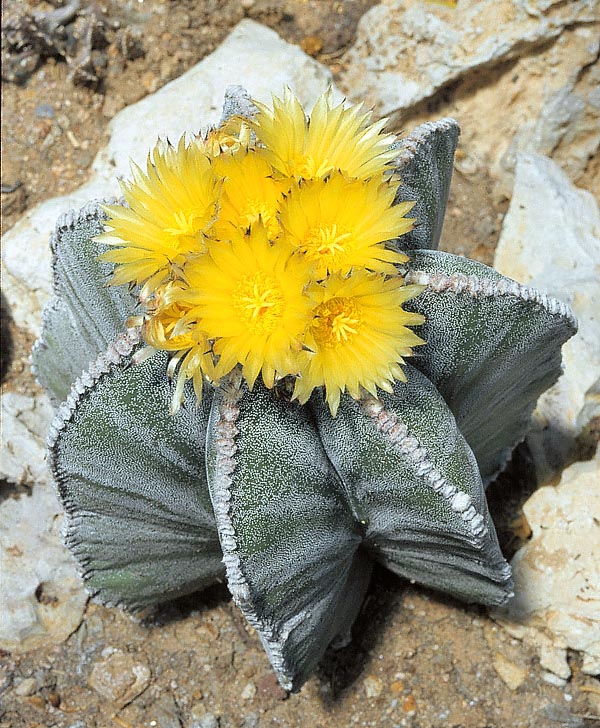 It usually has 5 ribs, seldom 3-4, which in the old specimens, can increase of number up to 10, very prominent, with triangular section and sharp tip, with an intense green epidermis, but, usually, thickly covered by small white woolly scales which confer it a whitish look; the areoles, spaced of about one centimetre, are without thorns but in the seedlings, where they are present but very small.

The flowers, long from 4 to 6 cm and slightly perfumed, come out in the apical part and are bell to funnel shaped, diurnal, two, three days lasting, wholly of a pale yellow colour or with reddish centre; the apex of the outer tepals is sharp and brown. The flowers are hermaphrodite but self-sterile, they need therefore a crossed pollination for fructifying.

The fruits are dehiscent, globose, of about 2 cm of diameter, greenish or reddish and covered by superposed woolly brown scales, with glossy dark brown seeds which germinate promptly at 20-24 °C. The plant usually blooms starting from the sixth year of life. For its inherent variability and facility to hybridize with the other plants of the genus, it has given and still gives origin to a great number of cultivars.

It is one of the succulent plants more diffused and appreciated due to the particular shape and the showy florescence; probably it is the easiest in the genus to be cultivated. It is to be placed in full sun, or, in any case, at the most possible luminosity, on particularly porous and draining moulds, being its thin roots very sensitive to the rottenness caused by humidity stagnation, which can be formed, in equal parts, by common garden earth poor of organic substance, rough sand (or agri-perlite) and calcareous crushed stone without dust. Even if it can stand, in an arid location, temperatures as low as -6 °C, in order to avoid easy rottenness, it is to be cultivated at temperatures over the +5/+6 °C.

Its collocation in open ground is limited to the situations where it is possible to recreate the original particular habitat conditions, but usually it is cultivated in pot with the same aforementioned modalities. In summer, during the vegetative period, it is to be regularly watered, but allowing the mould to dry up completely before irrigating again; in winter it is to be kept dry and at the previously stated temperatures, avoiding locations with high atmospheric humidity. Being easily subject to attacks of parasites, like the “red mite” and mealybug, also radical, it is to be kept under control in order to quickly take action, if needed.

Astrophytum myriostigma was last modified: May 6th, 2018 by Giuseppe Mazza