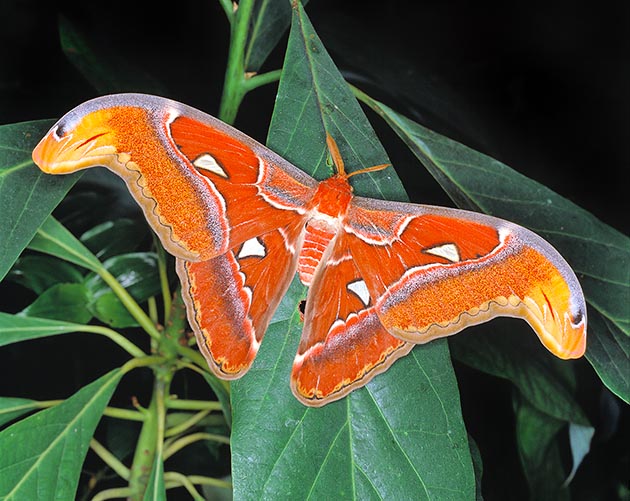 The Atlas moth, by some authors called Cobra moth, due to the resemblance with the colours and the patterns which recall the livery of this serpent, (Attacus Atlas – Linnaeus, 1758), is a nocturnal species, therefore a moth, afferent to the group of the Heterocerans (Heterocera), to the phylum or group of the Arthropods (Arthropoda), to the class of the Insects (Insecta), order Lepidopterans (Lepidoptera), family Saturniids (Saturniidae), genus Attacus.

For its overall dimensions, it is the largest amongst all moths, even if the Noctuid (Noctuidae), Thysania agrippina, has, as an average, a larger wingspan.

The family it belongs, the Saturniids (Saturniidae), is a fairly vast group which counts about 1900 species and hundreds of races or subspecies present in all continents, but diffused especially in the subtropical and tropical regions.

The species is spread in India, Ceylon, China and in Indonesia; however, some specimens have been caught also in the Filipino archipelago. The biogeographic region to which it belongs is therefore the Indo-Australian one. 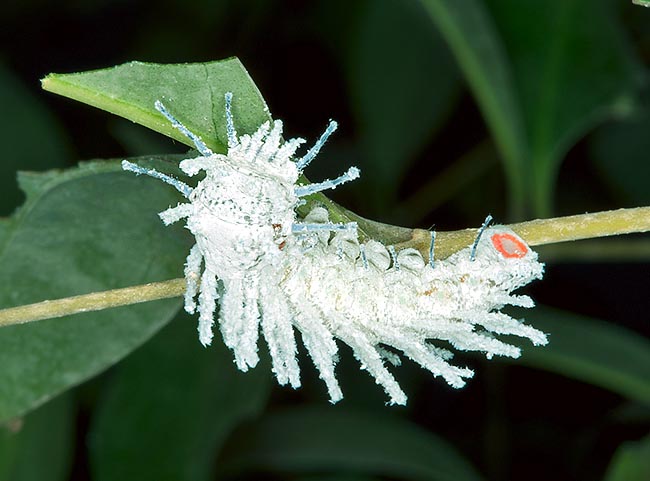 Night flying species, it frequents the tropical pluvial forests as well as the temperate pluvial ones (i.e. in China), but also bamboo forests and prairies.

The wings have a characteristic shape; it has an elegant livery coloured with various shades of brown and showing geometric drawings of various type; the apex of the fore wings has a reddish shade. Always the front pair has translucid triangular spots and dots. From the forward pair starts a curved mark which goes down up to the hind couple.

A red brick median line extends from the hind couple to the fore couple of wings, whilst the margins of both the alar couples show brown spots with pale edge. In the males, the antennae are strongly pinnate.

The wingspan varies between the 15,9 and the 30 cm. the two sexes, if we except the antennae, are much similar for size and livery. 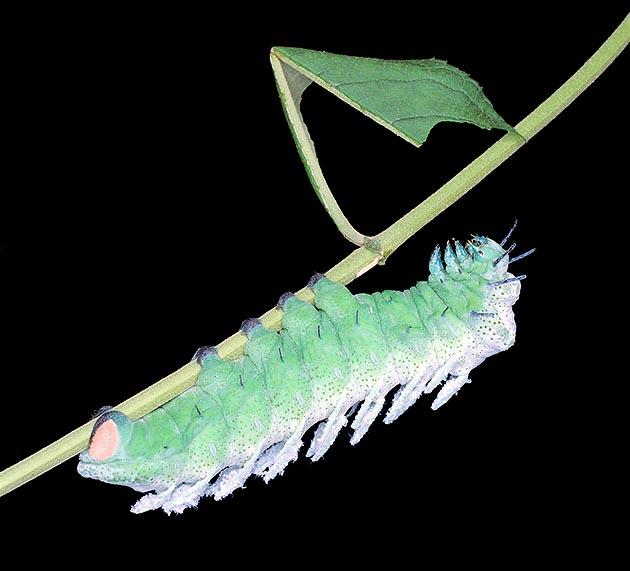 The same before pupating. It has stored what needed for creating a 30 cm butterfly © Giuseppe Mazza

The caterpillar of the Atlas moth is of a pale yellowish green colour, with long fleshy spines which appear as dusted by a waxy white substance; at the caudal extremity is present a pair of robust cups, which are useful to the larva for anchoring on the branch of the plant on which it grows and nourishes.

It develops on various types of plants. Fairly easy to breed and sufficiently robust for growing in captivity, it can be nourished with leaves of Willow (for instance Salix babilonica or Salix tristis), Poplar (for instance Populus adenopoda or Populus trichocarpa) and of Privet (for instance Ligustrum sinense or Ligustrum obtusifolium).

The mating may last a whole day, after which the female lays even 200 eggs which remain incubated for about 13-14 days. By the hatching, the caterpillar begins to nourish for the following three months, growing up, and, by the end of them it pupates for then, later on, metamorphosizing. The cocoon is formed by a particular silk, which, worked, produces a special thread that is used in the textile industry, the Zagara thread or silk.

For the IUCN, this species has a status of LC (low risk), which means with a minimum risk of extinction.