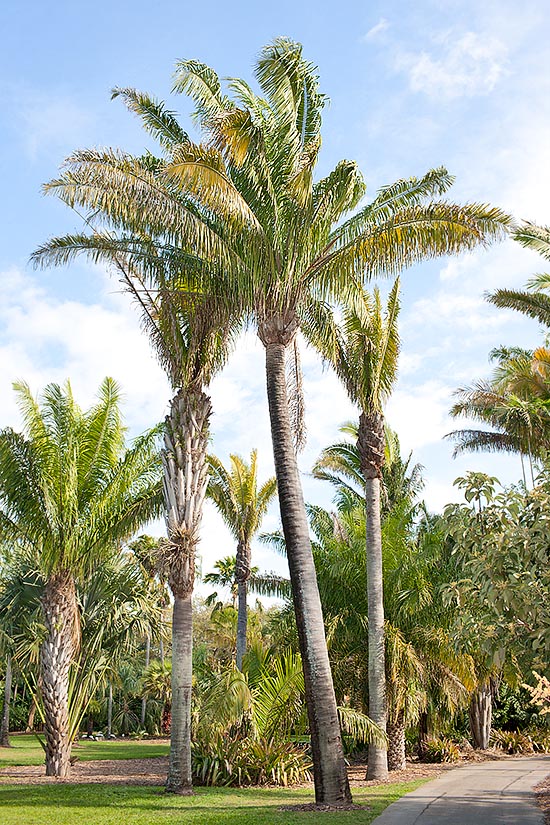 The species is native to Bolivia, Brazil (Acre, Amazonas, Amapá, Federal District of Brasilia, Goiás, Mato Grosso, Mato Grosso do Sul, Pará, Roraima , Rondônia and Tocantins), Colombia, Costa Rica, Ecuador, Guatemala, Honduras, Mexico (Campeche, Chiapas, Oaxaca, Tabasco and Veracruz), Panama, Peru, Trinidad and Tobago and Venezuela, where it grows in the humid forests, often along the banks of the rivers, as well as in the savannahs and semi-arid degraded areas, where often it is the dominant species, mainly at low altitudes.

The name of the genus recalls Àttalos III (ca. 170 BC - 133 BC), king of Pergamon, scholar of medicine and of botany; the name of the species is the Latin adjective “butyraceous, a, um” = buttery, oily, from “butyrum” = butter, with reference to the oily seeds.

The Attalea butyracea (Mutis ex L.f.) Wess.Boer (1988) is a monoecious species with single stem, tall up to about 20 m with a diameter of 20-40 cm, of brown grey colour covered in the younger part by the base of the old leaves. Pinnate leaves, up to 9 m long with foliar base provided at the margins of robust rigid fibres, short or absent petiole, linear pinnules, up to 1,5 m long in the central part and about 6 cm broad, of bright green colour on the upper page, pale green below, regularly distributed along the rachis on a same level and vertically placed in the second half of the leaf.

Inflorescences between the leaves enclosed initially in a persistent woody spathe long up to about 2 m, erect, hanging in fruit, ramified, up to 1,3 m long, carrying either only male flowers, or with female flowers at the base and male ones at the apex. Male flowers of pale cream colour with three sepals, three petals, about 1,5 cm long and 6 stamina, female flowers dark cream coloured about 2 cm long; the flowers emit a penetrating odour.

Imposing species and among the most diffused in tropical America, cultivable in the tropical and subtropical climate zones, it can stand, when adult, to sporadic, and for a very short period, drops of temperature to around the 0 °C. It requires full sun, availability of water and is not particular about the soil. It is of great landscape value, but rarely employed, utilizable isolated, in group or in rows in great parks and gardens.

The yellow pulp of the 5-10 cm long fruits is an important livelihood for the locals. From endosperm they get an edible oil © Charles Brewer Carias

The leaves are utilized by the local populations as coverage of rural dwellings and for fabricating hats, bags, brooms and other handcrafted items; from the endosperm they get an edible oil, but the particular hardness of the endocarp is a hindrance to its extraction at a commercial level; the fruits are used in the animal alimentation and the apical bud (“palm heart”) is very much appreciated and occasionally consumed, but this entails the death of the plant.