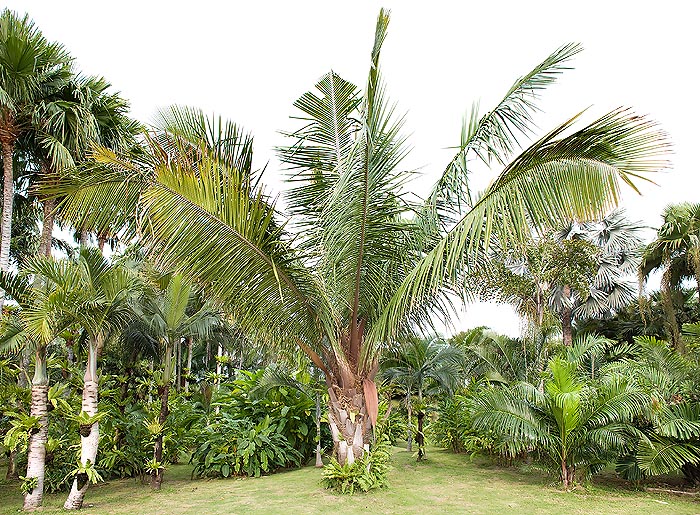 The Attalea cohune reaches the 15 m with even 9 m long leaves. Its oil is used for the margarine © Giuseppe Mazza

This plant is native to the humid forests of Belize, El Salvador, Guatemala, Honduras and Mexico (states of Campeche, Chiapas, Colima, Guerrero, Jalisco, Michoacan, Nayarit, Oaxaca, Quintana Roo and Tabasco), where it chiefly grows along the Pacific Ocean coast at low altitudes on sandy soils.

The name of the genus reminds Àttalos III (ca. 170 B.C.-133 B.C.) king of Pergamum, scholar of medicine and botany; the name of the species is the local name of this palm.

The Attalea cohune Mart. (1844) is a monoecious plant with single stem, up to about 15 m tall with a diameter of 30-60 cm, of dark grey colour covered, in the younger part, by the base of the old leaves. The pinnate leaves, mostly bound upwards and up to 9 m long, are of a dark green colour with 0,9 m long pinnulae regularly distributed along the rachis on a same level; the rachis rotates, by its mid length, placing the pinnulae on a vertical level. The 1-1,5 m long inflorescences come out between the leaves, initially erect, then hanging, due to the weight of the fruits and are formed by a central axis (rachis), from which depart several lateral floriferous branches (rachillae), bearing flowers of cream-white colour, either only male or with some female ones at the base and male at the apex. The fruits are ovoid or ellipsoid, 4-8 cm long, with a diameter of 3-4 cm, of yellowish-brown colour and contain from one to three seeds.

It reproduces by seed which germinates in 3-6 months at a temperature of 26-30 °C; at lower temperatures, the times of germination get longer. The growth is initially slow. It’s one of the most majestic palms, of great landscape value, but is suitable only for parks and vast gardens, or for bordering broad alleys. Among the Attalea, it’s the species extending its origin area more to the north; it is cultivable in the tropical, subtropical and, marginally, warm temperate climatic zones; the adult plants seem to resist, only for a very short time, up to -4 °C, even if with harm to the aerial part. For an optimal growth, the lowest temperatures should maintain over the 10 °C. It requires a full sun exposition on draining soils, possibly sandy, and a great availability of water; it bears even moderately saline soils and therefore it may be employed in proximity of the sea.

The huge leaves are utilized by the natives for roofing the houses and the pinnulae of the leaves of the young plants are used for fabricating the typical sombreros. The fruits have a pulp with a very pleasant taste and at times are eaten locally; they are, on the contrary, frequently utilized as fodder for the cattle. The apical gem, which has a delicate taste, is considered as a dainty, but it entails the death of the plant. The seeds contain up to the 70% of oil, white and solid at ambient temperature, similar to the coco’s one, composed by the 46% of lauric acid, 15% myristic, 10% oleic, 9,5% palmitic, 7,5% caprylic, 6,5% capric, plus other minor components, between which the stearic and linoleic acids. The oil is utilized for the production of margarine and in the cosmetics industry; purified, is and excellent lubricant and seems to have also promising characteristics as bio-fuel. With the “shells” of the seeds we may produce activated charcoal, coal which was utilized in the gas masks during the Second World War. The seeds, cleaned and polished, are utilized for trinkets or for realizing small handicrafts.