The species is endemic to a restricted area in the south-western part of Haiti, where it survives in quite a few specimens in the dry forest, from the sea level up to about 450 m of altitude. It is the only species of the genus present in the Caribbean.

The generic name reminds Attalus III (ca. 170 B.C.-133 B.C.) king of Pergamon, scholar of botany and of medicine; the specific name is the combination of the Latin adjective “crassus, a, um” = big, thick, and of the substantive “spatha, ae” = sword, with reference to the bract enclosing the inflorescence. 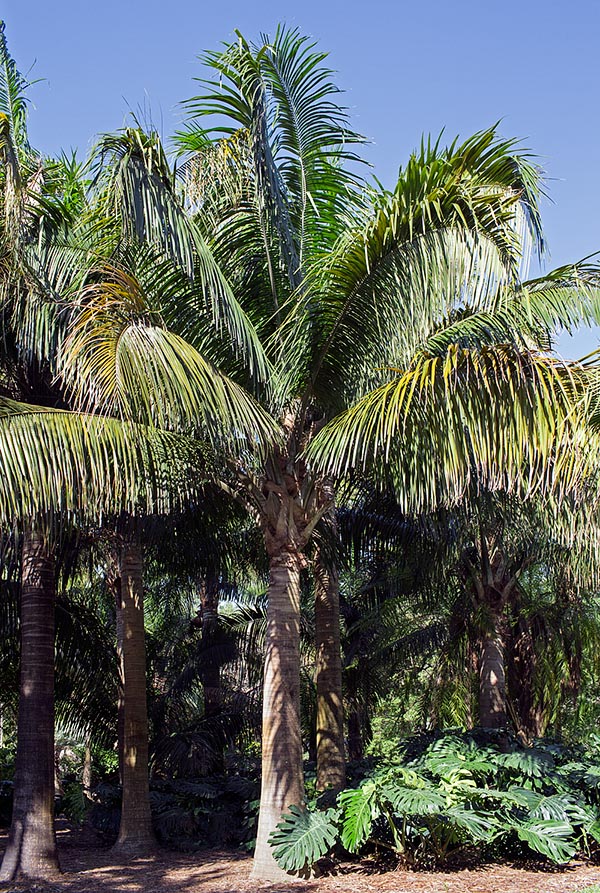 The Attalea crassispatha (Mart.) Burret (1929) is an unarmed monoecious species with solitary cylindrical stem with slightly enlarged base, 20-24 m tall and of 30-40 cm of diameter, of greyish colour and marked by the annular scars of the fallen leaves. Pinnate leaves, on an about 70 cm long petiole, ascending, 4,5-5,4 m long, with 130-160 pairs of leaflets regularly arranged along the rachis on a same plane, linear with acuminate apex, drooping, 0,7-1 m long and 4-5 cm broad in the central part, of pale green colour; the foliar base, that surrounds only partially the stem, and the petiole are covered by a glaucous pruinosity. The inflorescence, initially enclosed in a thick persistent woody spathe, more than 1 m long, generates among the leaves (interfoliar), 60-90 cm long, with ramification of the first order bearing either only male flowers or female at the base and male flowers for the rest of the length; the male flowers have three free lanceolate petals, 8-9 stamens and twisted anthers. The fruits are ovoidal drupes, 3-4 cm long, of orange red colour when ripe containing one single globose seed of about 2 cm of diameter.

It reproduces by seed, previously cleaned from the pulp and immersed in water for two days, in draining loam maintained humid at the temperature of 24-28 °C.

Because of the small number of individuals present, of the increasing anthropization and of the overgrazing, that hinders its natural reproduction, the species has been inserted into the red list of the IUCN (International Union for the Conservation of Nature and Natural Resources) as “Critically Endangered” (at very high risk of extinction in nature in the immediate future). A good number of seeds was collected in 1991 during an expedition organized by the Fairchild Tropical Botanical Garden of Miami (Florida, USA) and by the New York Botanical Garden with the purpose of introducing again the species in Haiti and distribute a part of them to botanical gardens and scientific organizations, presently (2017) some specimens are present at the Fairchild, but they have not yet bloomed.

On the base of the climate conditions of the origin zone and of those where it has been introduced, in reduced number, starting from the 90s of the twentieth century, its cultivation appears limited exclusively to the tropical and milder subtropical zones, with preferably seasonal climate, in full sun and on well drained soils, as it does not stand water stagnations. In Haiti the immature endosperm, soft and of pleasant taste, that reminds that of the coconut, is consumed especially by the children, furthermore the seed is rich of good quality oil that might be utilized also for culinary uses. Finally, the species has ornamental and landscaping characteristics of great interest, one more reason for trying to save and spread that is presently one of the rarest palms in absolute.