The species is native to eastern Brazil (Bahia, Espirito Santo, Rio de Janeiro and Sao Paulo) where it forms dense colonies in the underwood of the pluvial forest (Atlantic Forest) as well as in open areas, mainly along the coast.

The Attalea humilis Mart. ex Spreng. (1825) is an unarmed species, solitary, monoecious, acaulescent or with underground stem, typically “saxophone” shaped, or short, up to about 1 m tall, with 5-15 ascending pinnate leaves, 2,5-5 m long, provided of 70-120 pairs of leaflets regularly arranged along the rachis and on a same plane, linear with acuminate apex, long in the median part up to about 70 cm and 3-4 cm broad, of intense green colour and glossy above, paler below. Inflorescences among the leaves, 65-90 cm long, covered by grey-brown tomentum with ramifications of the first order bearing either only male flowers or only female ones on the same plant; the male flowers have lanceolate petals with acuminate apex and 6(-9) stamens. Obovoidal fruits, 4-9 cm long and of 3-8 cm of diameter, of pale brown colour when ripe, with fibrous mesocarp, containing 1-3 fleshy white seeds. 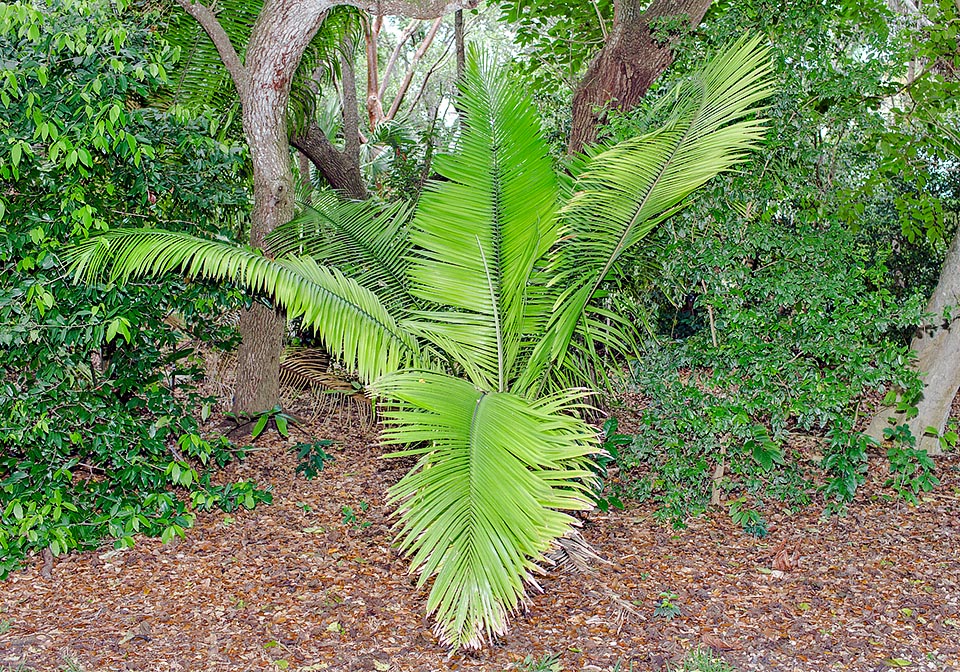 Native to eastern Brazil the Attalea humilis is a solitary monoecious species, acaulous or with underground stem or short about 1 m tall. Edible oil and medicinal virtues © Giuseppe Mazza

It reproduces by seed, in organic draining loam maintained humid at the temperature of 24-28 °C, with rather long germination times, that may be shortened through scarification to be done with caution.

Species amply diffused in the origin area, where it can colonize ample spaces, disseminated by the fauna, so much to be considered in some situation as a pest. Of sure ornamental effect thanks to its elegant foliage, but little employed with such purpose, to utilize in full sun or slight shade in parks and vast gardens of the tropical and humid subtropical climate zones, where it can stand temperatures around the 0 °C provided exceptional and of very short duration. It is not particular about the soil, even if poor, but preferring the sandy ones, and is resistant to fire and to saltness.

The local populations use the leaves for making mats for roofing, arts and crafts objects, from the endosperm they get an edible oil, of good quality; the infusion of leaves and roots is utilized in the popular medicine against the urinary infections. In some zones of the origin area on the rotting dead leaves in humid environment grows up a bioluminescent fungus, the Neonothopanus gardneri (Berk. ex Gardner) Capelari, Desjardin, Perry, Asai & Stevani (2011), locally called flor de coco, that during the night emits a pale emerald green light so much intense that several close specimens can sufficiently illuminate a small space around them.