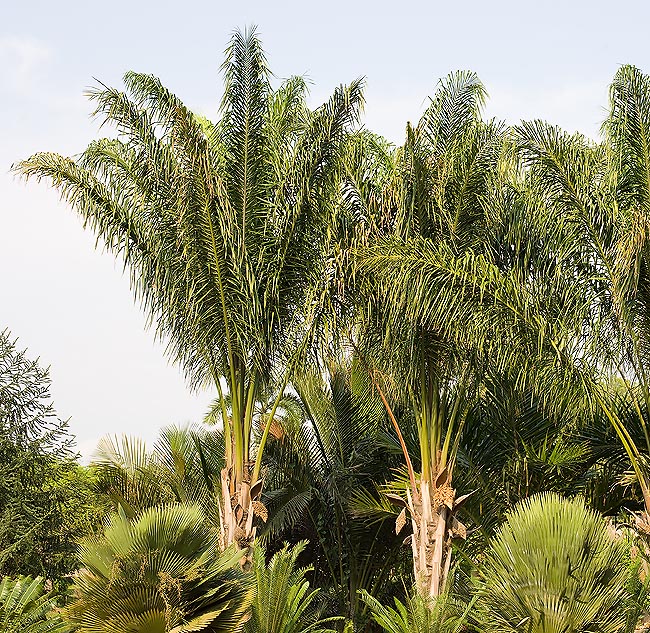 The plant is native to Brazil, Colombia, Ecuador and Peru, where it grows in the pluvial forest of the Amazonian region in periodically submerged zones.

The name of the genus reminds Àttalos III (ca. 170 B.C. - 133 B.C.), king of Pergamum, scholar of medicine and botany; the name of the species is the Latin word “insignis” = great, remarkable, with obvious reference.

The Attalea insignis (Mart.) Drude (1897) is a monoecious plant with subterranean, or little emergent, stem, covered from the base of the old leaves; these are pinnate, about 3-7 m long, on a 1,5-3 m long petiole.

The pinnulae, glossy pale green coloured on the upper side, slightly paler below, have the central nervation particularly prominent and are up to 1 m long in the central zone and are 2-4 cm broad. The pinnulae are placed in groups of 2-6 units along the rachis and go towards various directions, thus giving the leaf a rather feathery look; the apical pinnulae are usually united at the apices.

The inflorescences come out between the leaves on a long peduncle, initially erect, then pendulous, due to the weight of the fruits, and are about 0,8 m long and are formed by a central axis (rachis), from which depart several lateral floriferous branches (rachillae), carrying flowers, of pale yellow colour, only male or female, in number of 1-4 at the base, and male in the remaining part. The fruits are oblong or ellipsoid with sharp apex, about 7 cm long with a diameter of 4 cm, of brown colour, containing from 2 to 3 seeds. It reproduces by seed which germinates in 2-4 months at the temperature of 24-28 °C.

Essentially tropical plant in its exigencies, it requires full sun or slight shade and constantly humid soils, even submerged for long periods of the year. Little cultivated outside its origin zones, is almost exclusively present in botanical gardens and in the lovers collections, though the plant, with its long leaves which seem to come out from the ground, would deserve a greater diffusion.

Fairly common in some zones of Amazonia, it has a relatively minor importance, in respect to other palms, in the life of local populations; some tribes eat the ripe fruits and use the leaves for roofing the houses and for fabricating mats; the petiole and the rachis of the leaves were utilized for making blowpipes and darts. In the Peruvian Amazonia, some tribes eat the larvae of a coleopteran living in the decaying stems and in the fruits, to which they ascribe, besides the alimentary importance, also medicinal properties.