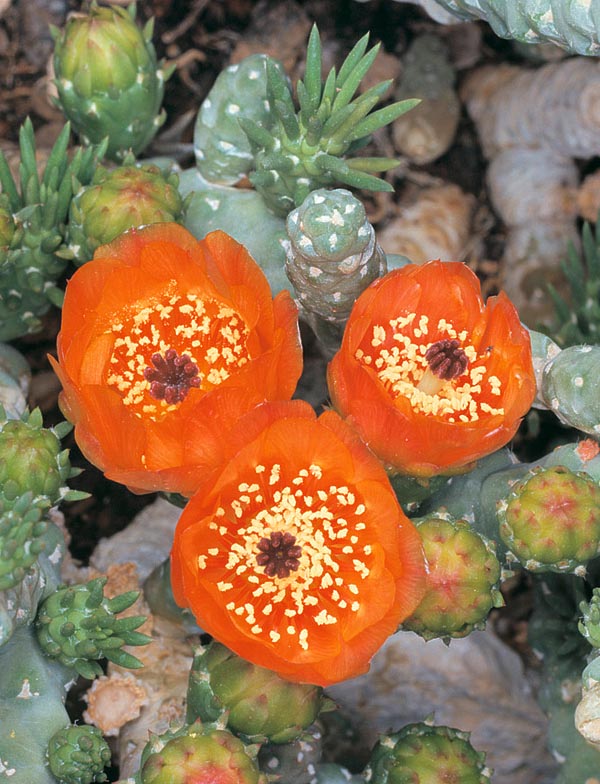 The Austrocylindropuntia verschaffeltii (F. Cels ex F.A.C. Weber) Backeb. (1939) is native to Bolivia (province of La Paz) and Argentina (province of Catamarca), where it grows in semi arid areas between the 1.500 and the 3.500 m of altitude.

The name of the genus comes from the combination of the Latin word “auster” = south and of the name of the North American genus Cylindropuntia, due to the resemblance found between some plants of the two genera; the species is honoured to the Belgian horticulturist Ambrose Verschaffelt (1825-1886).

Plant thickly cespitose with tuberous roots, it has ellipsoidal to cylindrical segments as long as about 10 cm, with a diameter from 1,5 to 2,5 cm, ramified at the apex at times.

The segments have the epidermis of green colour slightly glaucous, tending to the brown and to get fissured with the age, and are provided with tubercles; the leaves, succulent and persistent for quite a long time, are fusiform, long from 0,5 to 3 cm, of a green colour, suffused with red, at times.

The yellowish areoles, of about 2 mm of diameter, are usually provided with thorns, varying from 5 to 7, thin, flexible, straight or curved, long up to about 6 cm, but which can be missing completely on some areoles.

The long lasting (some days) flowers, come out at the apex of the segments, are bell-shaped, up to 4 cm long, with a diameter of 3,5 cm.

The receptacle is pale green with red coloured scales at the tip, the outer tepals are narrow, green with red extremity and the inner ones are rounded, with quite irregular margins, with colour going from the orange to the bright red.

The fruits can be from ellipsoidal to pear-shaped, with no thorns. It easily reproduces by well dried cutting in summer, and by seed.

Plant of contained dimensions and of easy cultivation to be placed in full sun, or, anyway, at the maximum possible luminosity, on particularly draining soils which can be formed for about the 50% by common fertilized garden earth and for the rest, in equal quantity, by rough siliceous sand and crushed stone.

It has a good resistance to the dry cold, as it can resist for short time up to -6 °C, but not to the wet cold which can cause rottenness. Its best positioning in the open air is in the “desert” gardens together with other xerophytes, elsewhere is to be cultivated in pot with the same aforementioned modalities. Therefore, in the climates characterized by wet winters, it is to be sheltered and kept dry at temperatures possibly between +5 and +10 °C; in summer, it is to be regularly watered, but allowing the mould to dry up completely before irrigating again.