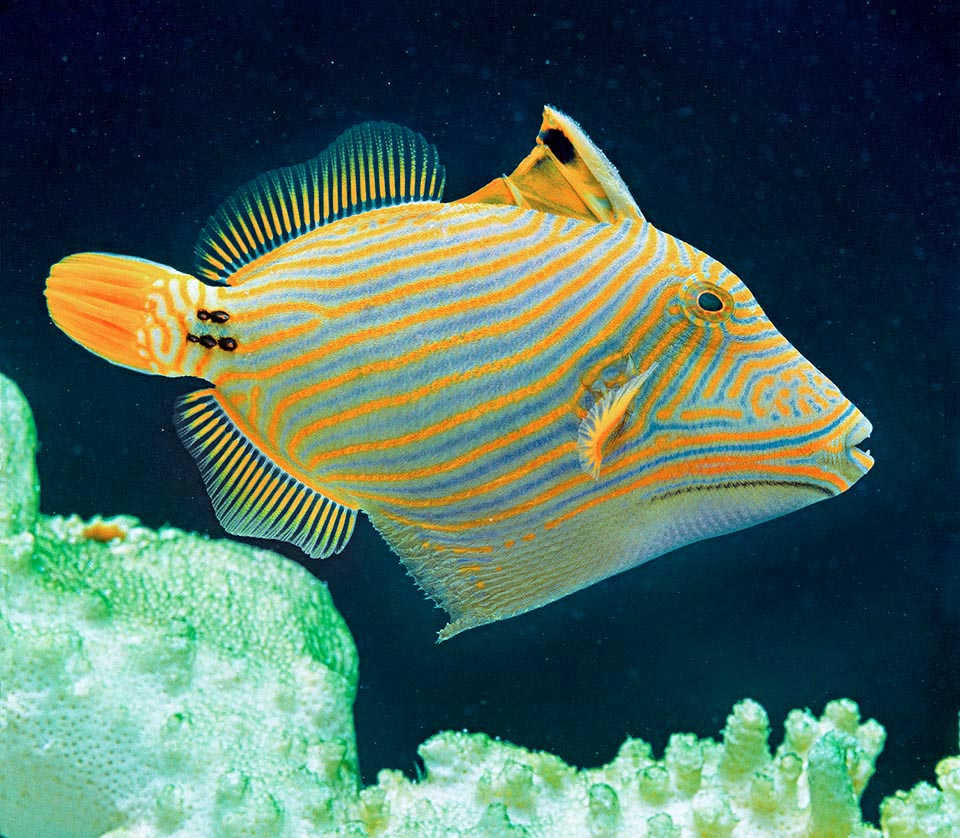 Orange-lined triggerfish (Balistapus undulatus) in defensive posture with the belly extended to appear bigger and the fused pelvic fins simulating a spine. Actually, the mighty weapon of the family is the first ray of the dorsal: a dagger that the fish may block vertically and remains as such even if it dies for hurting the predators’ stomach © Giuseppe Mazza

Often present in public aquaria, the Orange-lined triggerfish (Balistapus undulatus Park, 1797) belongs to the class of the Actinopterygii, the ray-finned fishes, to the order of the Tetraodontiformes and to the family of Balistidae, the so-called trigger- fishes.

The name of the genus “balistapus” comes from the Latin “balista” = crossbow, the same root of the genus Balistes, and from the Greek “apus” = having no foot, because the ventral fins, already atrophied in the Balistidae, have transformed in a spine. The name of the species “undulatus” = undulate, refers to the orange lines which cross obliquely, like waves, the greenish body. 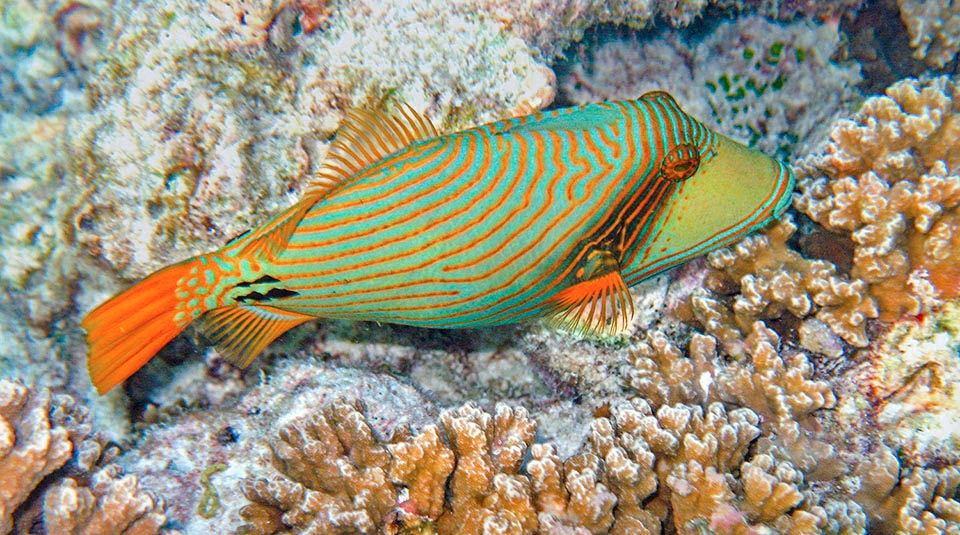 When it swims quietly the first dorsal fin disappears like here in a special housing, reducing the friction with the water and increasing, if it’s necessary, the effect of surprise © Gianemilio Rusconi

The orange-lined triggerfish is present in the tropical waters of the Indo-Pacific. We find it along the African coast from South Africa to the Red Sea and the Arabian Sea. As an indication, it is frequent also in the Seychelles Islands, Réunion and the Maldives, in India, Sri Lanka, Thailand, Australia, Indonesia, New Guinea, Micronesia, Philippines, Taiwan and China up to southern Japan. 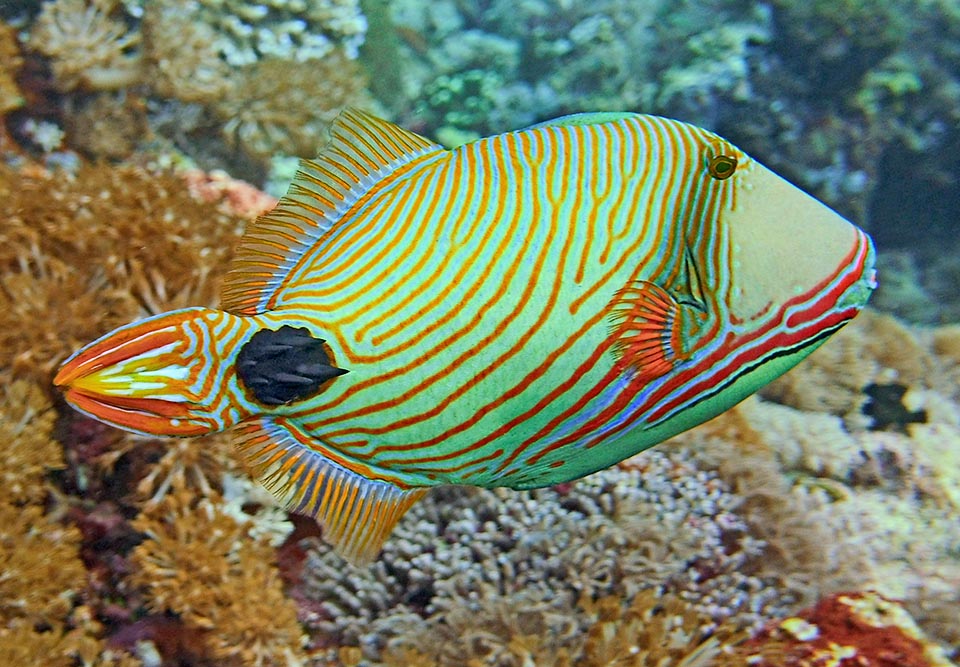 On both sides of the caudal peduncle the bony scales form two rows of black spines, highlighted by a black circle in the Pacific specimens. Probably they are not very effective weapons, but some predator may mistake them for the well known sharp blade the Acanthurus extract, exactly in the same position, from their showy case © Karine Marangon

Eastwards, it is at home in Kiribati, Samoa, the Marquesas Islands and Tuamotu. In the southern hemisphere, it reaches New Caledonia and Tonga.

It lives in still waters, in the lagoons rich of corals up to 50 m of depth, even if it prefers to swim in low waters and rarely goes down under the 15 m. 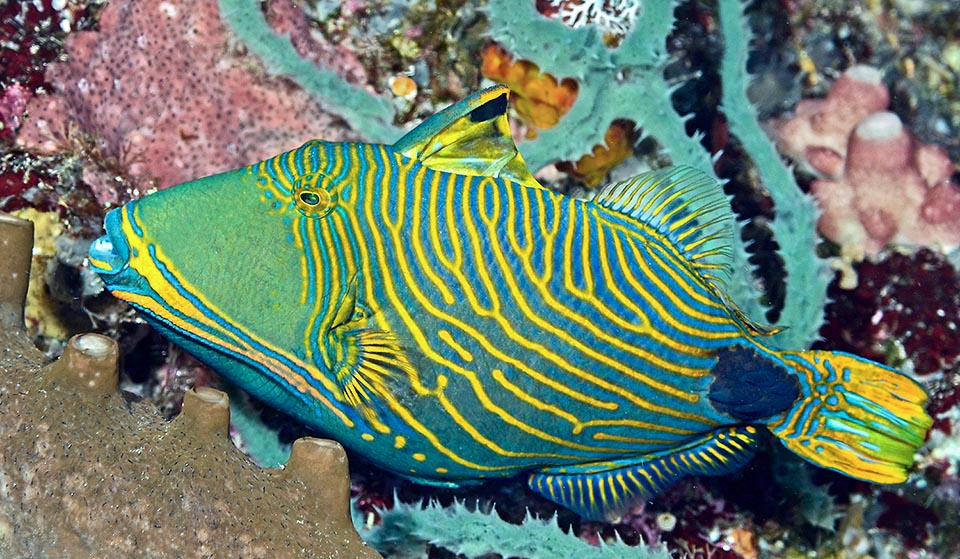 The livery colours, mimetic and aposematic at the same time, vary depending on the zones, the fish mood and the sex © Benoit Lallement

It can reach the 30 cm of length, but practically rarely exceeds the 27 cm.

The body is flat, protected like all Balistidae by a cover of bony scales.

On the back it has the typical trigger, blockable in erect position. This is formed by three spines, usually folded and hidden in a dorsal casing. 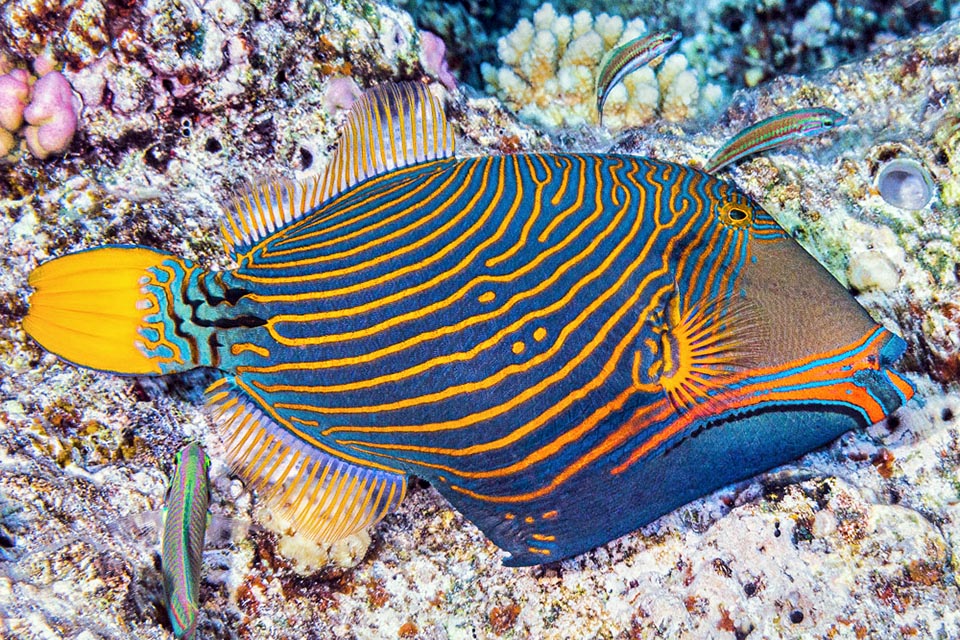 In fact, even if on the body the drawings can change, in the adult males, whatever the colour is, the upper part of the snout is always without stripes © François Libert

The first spine, long and sharp, remains in vertical position also after the death of the fish and is therefore an important deterrent for the predators. As is the custom among the triggerfishes, it serves also for sleeping peacefully without being carried away by the currents.

When a Balistapus undulatus finds a grotto with a small entrance, where it can pass only with lowered fin, it chooses it immediately as den, because it knows that, by erecting the trigger, no big predator will ever be capable to surprise it. 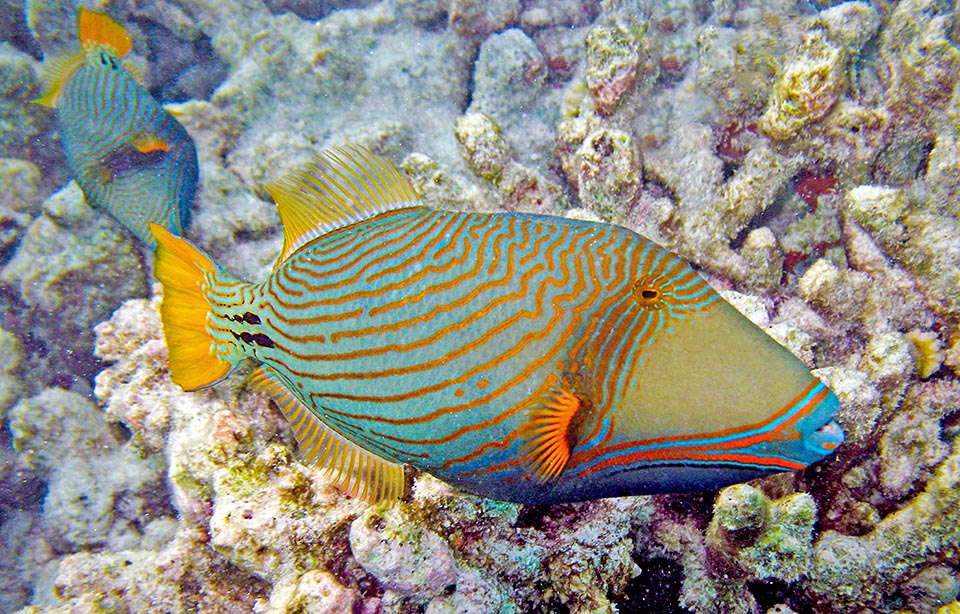 Maldive Islands male followed by a female. For the reproduction the latter digs a nest into the sand and watches the fecundated eggs until the time of the hatching © Gianemilio Rusconi

The mouth, decidedly small if compared to the body, is armed with solid sharp teeth, for crumbling shells and madrepores.

The body, trapezoidal when the fins are stretched in horrific position, has an unmistakable livery due to the wonderful orange lines which stand out on the greenish background and which interest also the fins. They are absent only on the cheeks of the adult specimens. The caudal, always orange, is preceded on the peduncle by two black lines which remind the evil-minded the presence of spines, and, between the first and the second ray of the trigger, a showy black spot reiterates the warning. 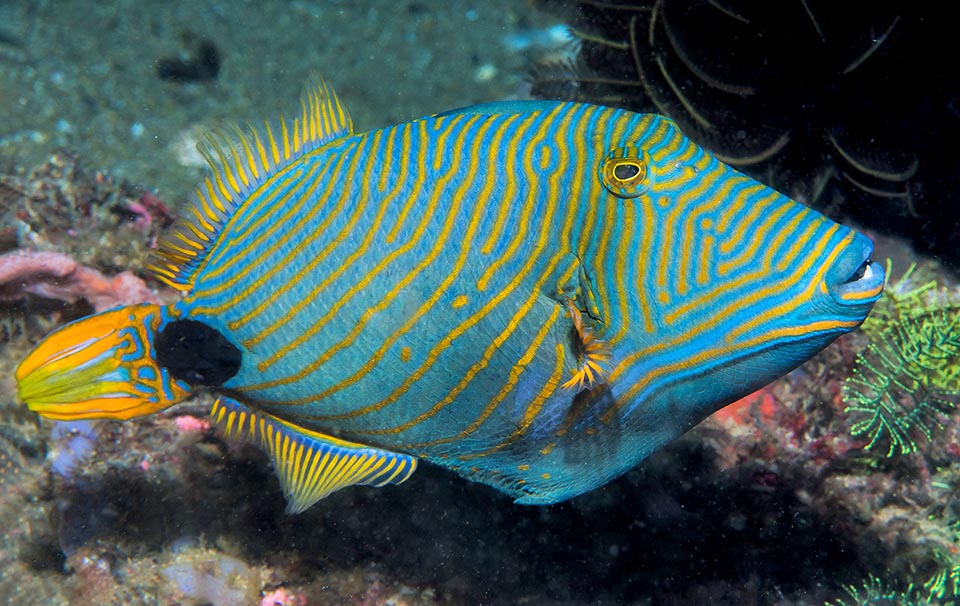 In its diet, definitely wide, enter also small fishes and sea-weeds. The eggs are spawned in a nest dug in the sand and guarded after fertilization until hatching. 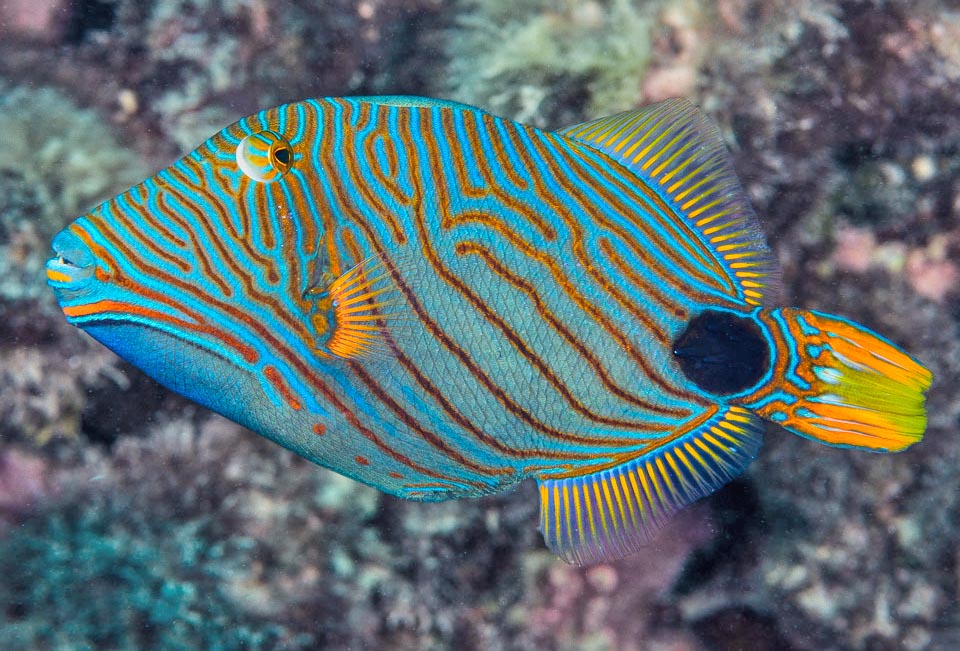 Here for instance another variant. Balistapus undulatus eats sea urchins and sea stars, crustaceans, ascidians, mollusks, annelids, sponges, hydrozoans and madrepore polyps, with preference for those of the genus Acropora. Occasionally also small fishes and algae. Little fished and with such food diversity is not an endangered species © François Libert

The populations may double in 1,4-4,4 years and even if captured for the aquaria and consumed by the local populations, the fishing vulnerability index of the species is currently very low, marking just 20 on a scale of 100.