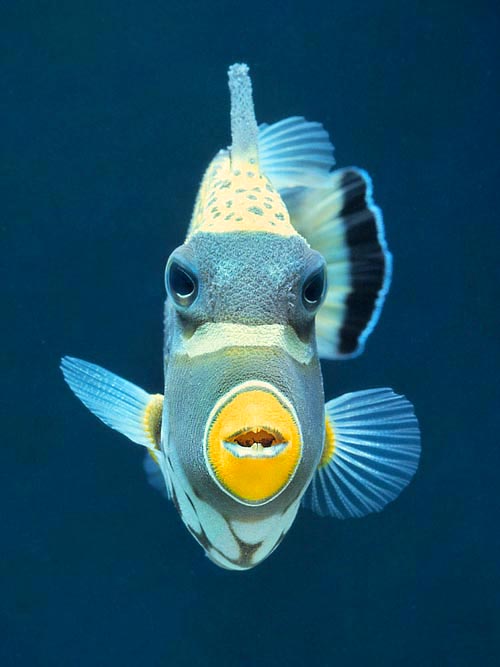 Balistoides conspicillum is the dream of many aquaria lovers © Giuseppe Mazza

The Clown triggerfish (Balistoides conspicillum Bloch & Schneider, 1801) belongs to the class Actinopterygii, the ray-finned fishes, to the Tetraodontiformes, a 40 million years old order with about 360 species amongst which the famous pufferfishes, and to the family of Balistidae, known as triggerfishes.

The name of the species “conspicillum” comes from the Latin “conspicio” = to look, with reference to the fact that, once seen from the front, it seems to be wearing a pair of white pince-nez.

It is at home in the tropical waters of the Indo-Pacific.

Just as an indication only, we find it along the entire African coast, from South Africa to Somalia and Yemen, in Madagascar, the Seychelles, Mauritius, Réunion, Maldives islands, in India, Sri Lanka, Christmas Island, Thailand, Malaysia, Australia, Indonesia, Micronesia, New Guinea, New Caledonia, Philippines, Taiwan and China up to southern Japan. Eastward, it has colonized the Fiji, Kiribati, Samoa and Tonga islands. Southward, it reaches Lord Howe Island.

It lives in the coral formations, mainly on the ridges, up to about 70 m of depth, and is present, at times, even in the brackish waters.

The Clown triggerfish may reach the 50 cm, but rarely exceeds the 35 cm. in fact, the growth is initially very fast, but then slows down and for reaching remarkable measures ten years are necessary. The body is relatively flat, oval and really unmistakable. The first dorsal fin, the trigger, has 3 spines. The fore one is bigger and like in all triggerfishes may be blocked in vertical position for hurting the mouth or the stomach of the predators. Once open, it can furthermore be useful for enjoying nice dreams in a cavity with a smaller entrance, sure of not being carried away by the currents. The second dorsal fin is totally unarmed, with 25-27 rays, as well as the anal, much similar and having 21-27 rays. The short ventral fins are reduced to one spine and the pectoral ones show 14-15 soft rays. The caudal fin is slightly rounded.

As befits a Balistidae the body is protected by an armour of bony scales with various tubercles and spines, modest in this case, lined in two rows on the caudal peduncle. The mouth, fairly small, has robust teeth for breaking the shells of the molluscs and the armours of the crustaceans. 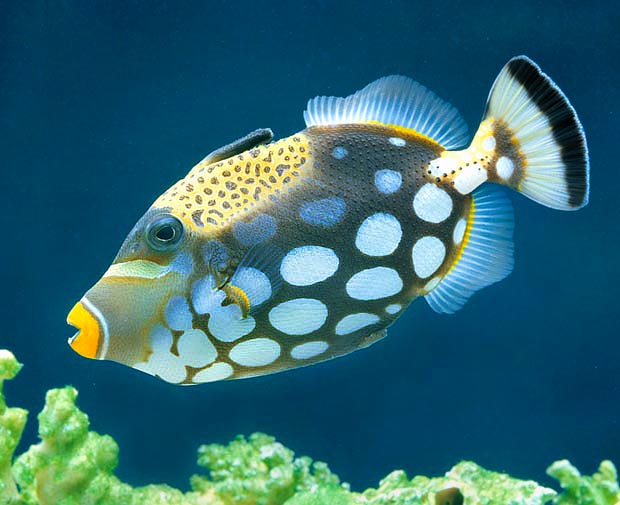 Solitary and territorial, is already rare and should be protected also out from the reserves © Giuseppe Mazza

The background colour can vary from brown to blue-black. The lower half of the body has the typical white roundish spots which have won its name of clown, not to forget the yellow-orange snout edged of black and white, the dorsal mantle with dark small dots and patterns on a cream ground, and the caudal fin, initially maculated, then white and finally black with blue edge.

Under the eyes we note, folded as it were resting on a nose, a pale band which recalls the frames of the pince-nez, fashionable in 1801 when Bloch & Schneider described the species.

The clown triggerfish is very territorial and lives isolated, nourishing of benthic animals: crabs and shrimps, sea urchins, molluscs and ascidians. For the reproduction, it builds a nest in the coral sand where the eggs are spawned, and it appears that the female stands guard.

It has never reproduced in captivity, where, however, it lives very well in suitably sized aquaria. Beautiful as it is, nobody would mind to eat it, nevertheless the local populations consume it regularly when it stumbles in the nets, indifferent of the numerous reports of poisoning by ciguatera.

Even if it is a species with diversified diet, which may double its members in 1,4-4,4 years, it has a vulnerability index of 39 per 100 which might increase. It is, in fact, an animal already rare in the wild, sold all over the world, at a high price, for the domestic aquaria.