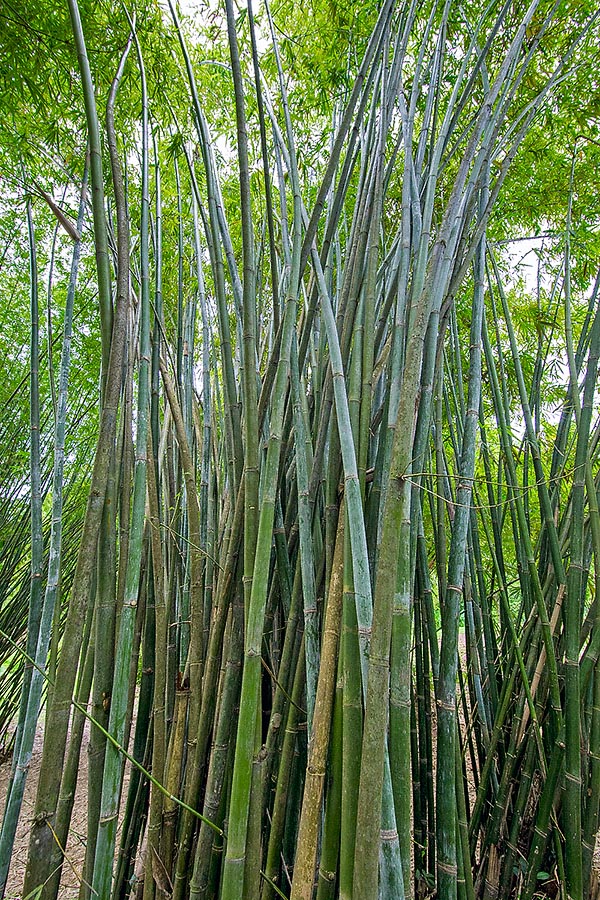 The species is native to Assam, Bangladesh, China (Yunnan), Himalaya, India, Laos, Myanmar, Nepal, Thailand and Vietnam where lives in the semi-deciduous humid forests, often along the water streams, up to about 1500 m of altitude.

The name of the genus comes from the local Malay name “bambu”; the specific name is the local one, tulda bans, in Bengali language.

A ring of whitish down is present over the nodes, the basal ones are also endowed of short aerial roots.

The culms, hollow between the nodes and with thick walls, are initially protected by trapezoidal deciduous bracts, 15-25 cm long and 16-28 cm broad, coriaceous, covered by brown spiky bristles.

Ramifications starting from the fourth node, numerous, the central three being longer then the others, each one with 6-10 alternate leaves, distichous, linear lancelate with long pointed apex, 10-25 cm long and 2-4 cm broad, of intense green colour above, greyish and villous below.

The blooming, normally gregarious (simultaneous flowering, in any part of the world, of all the tufts that have had the same origin, even several generations before), occurs on plants of many years of age, between the 25 and 60 years, with a huge panicle inflorescence devoid of leaves with 3-5 spikelets on the nodes, 2,5-8 cm long, bearing 4-6 fertile flowers; after the fructification the plant passes away. 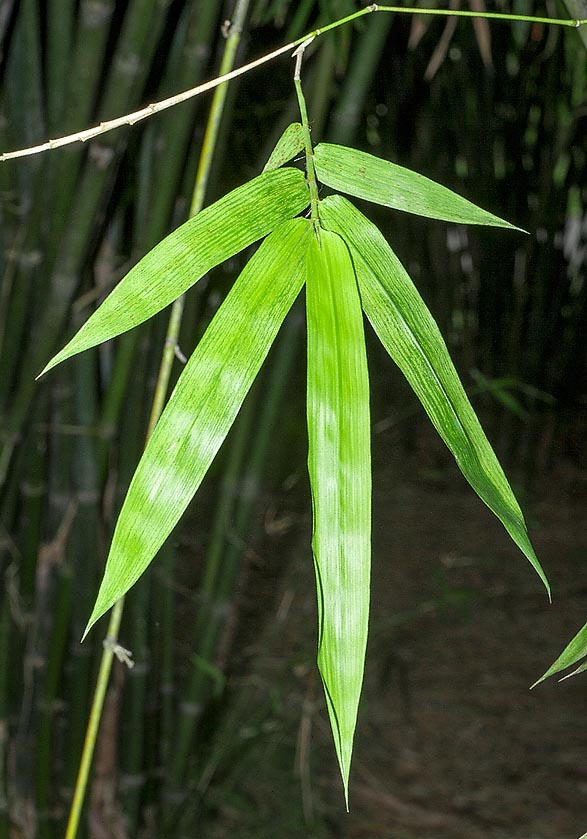 The culms are used for catwalks and scaffoldings. Edible buds and medicinal virtues © Giuseppe Mazza

The fruits are oblong caryopses, about 8 mm long, with hirsute apex.

It reproduces by seed, when available, that has a low germinability duration, 1-2 months if not well conserved, in draining organic loam maintained constantly humid at the temperature of 22-24 °C, with germination times of 1-3 weeks.

Usually, recourse is done to the division, extracting a portion of rhizome with 3 culms at least, cut over the first node, and to the cutting in summer, utilizing a portion of a one year old culm with 2-3 nodes.

The new plants thus obtained are initially to be placed in a slightly shady ambient and with high atmospheric humidity till when well rooted.

Fast growing species, reaching, in the best conditions, a height close to the maximum one in about one month, not invasive, greatly useful for the local populations and with remarkable ornamental characteristics, either as isolated tufts as well as for border hedges and windbreak and antinoise barriers, cultivable in the tropical subtropical and warm temperate climate zones, where it can resist to temperatures up to about -5 °C for a short period.

It requires full sun, for growing best, or slight shade, and fertile, draining soils, acidic or neutral, maintained constantly humid, even if it can bear, well rooted, periods of dry with possible loss of the leaves.

The culms, of high mechanical resistance and duration, are widely used, previous seasoning in water for some weeks and subsequent drying in the sun, in the civil constructions, for scaffoldings, catwalks, fences, frames, furniture, tools, fishing tackles and handicrafts; moreover they are employed in the paper industry, in particular in India, and as fuel. The young buds, with a slightly sour taste, are utilized in several typical local dishes and the leaves as fodder for animals. Finally, is also of considerable importance in the religious rites and in the traditional medicine.