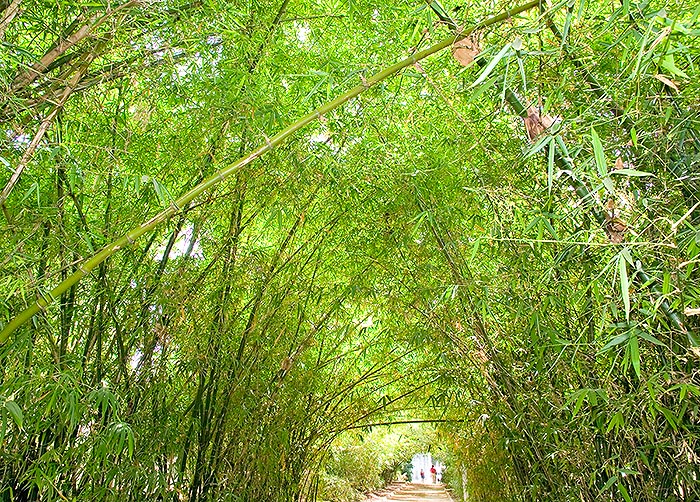 Known only in cultivation, it is deemed to be native to tropical Asia.

The name of the genus comes from the local Malaysian name “bambu”.

The name of the species is the Latin word “vulgaris” = common.

The Bambusa vulgaris Schrad. (1808) is a much variable perennial plant which has short and thick rhizomes and straight or sinuous stems (culms), curved at the apex, up to about 15 m tall, and with a diameter of 8-12 cm, of glossy green or yellow colour with green longitudinal stripes. The internodes are 20-45 cm long with slightly prominent nodes; the lower ones have numerous aerial roots. 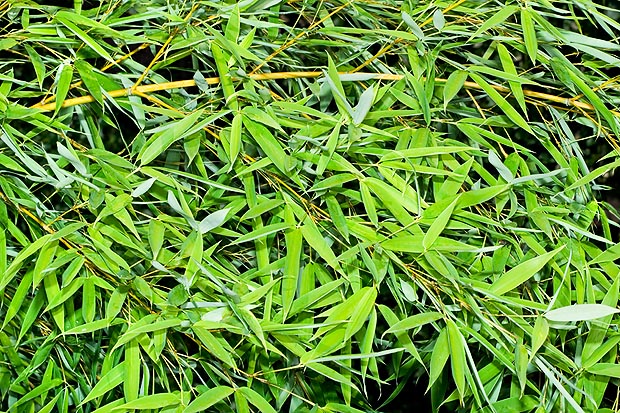 The culms are hollow between the nodes with walls which are usually 8-16 mm thick.

It forms rather open tufts which expand quickly during the first years of planting, then they slow down.

The young shoots rise rapidly, reaching, in the most favourable climate and soil conditions, the 3 m in some ten days and 15-18 m in three months, whilst the maximum diameter is reached in about ten years.

When young, the culms are protected by deciduous dark brown to green yellow bracts, covered by thick and rigid blackish hairs and whitish wax.

It has several thin ramifications, grouped at the nodes, the central one being usually predominant.

The inflorescences are large panicles, 2-3 m long, with small spikes grouped at the nodes, 1-3 cm long and carrying 4 to 12 flowers. Flowering does rarely take place and does not carry fruits.

The reproduction is done by division, stem cutting, utilizing a portion with two-three nodes, obliquely or vertically placed on a sandy substratum at the temperature of 20-24 °C, of branch and by marcotting. 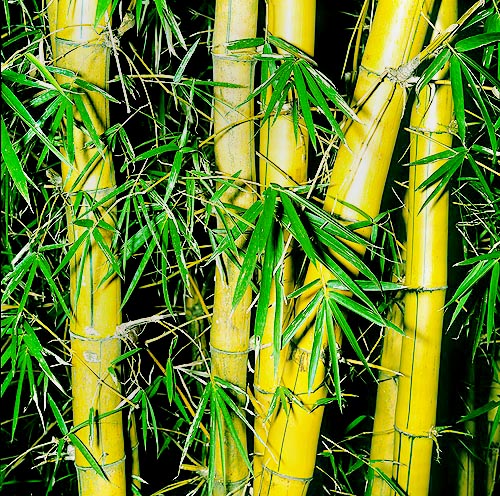 It is the most cultivated species of the genus due to its many uses, such as fences, irrigation pipes, fuel, in the country houses, for musical instruments and for various types of handicrafts, not to forget paper making, and the erosion control.

The young shoots are edible, even if little utilized for such purpose, and the leaves are locally utilized as food for livestock.

A far from secondary use is as ornamental plant, in particular, are widely spread for this purpose, two varieties, the ‘Vittata’, with yellow stem with green strips, and the ‘Wamin’, commonly known as “dwarf Buddha belly”, with short internodes which are swollen in the lowest part. The best climates are the tropical and humid tropical ones, but it may adapt also to the warm temperate one, as it can resist to temperatures up to -2, -3 °C, and in the case of big tufts, to drought periods, even if with a less abundant growth and partial or total loss of the foliage. The exposition must be in full sun and the soil must be very draining and is to be kept constantly humid; for its growth, the plant requires a huge quantity of water, but without stagnations which might lead to its death. When placing it, it is to be kept in mind that it may colonize ample zones, excluding any other species, if it is not adequately controlled and contrasted. It may also be cultivated in capacious pots for the decoration of patios, terraces and vast luminous areas.