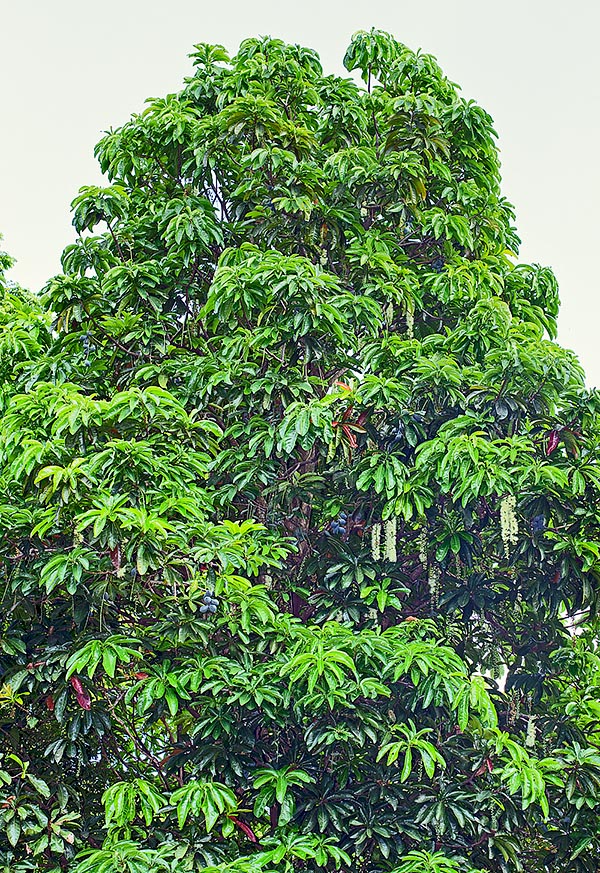 The species is native to Australia (Queensland), Aru Islands and New Guinea where it lives in the pluvial and coastal forests, often along the banks of the water streams, at low altitudes.

The genus is honoured to the English lawyer and naturalist Daines Barrington (1727-1800); the scientific name is the Latin adjective “calyptratus, a, um” = endowed of calyptra, a sort of veil with which the women did cover their head, coming from the Greek substantive καλύπτρα” (calyptra) = veil, cover, with reference to the calyx.

The Barringtonia calyptrata (Miers) R.Br. ex Benth. (1907) is a deciduous tree for a short period, 10-30 m tall, with grey-brown bark vertically fissured and leaves grouped at the extremity of the branches, simple, ovate-oblong with obtuse apex and entire margin, 12-35 cm long and 5-12 cm broad, of glossy dark green colour above, pale green below, coriaceous.

Long drooping inflorescences bear numerous sessile or subsessile hermaphroditic flowers with initially entire calyx, that splits at the opening in pointed lobes or more often opening along a circumference and detaching the upper part shaped like a hood (calyptra). Corolla, of about 2,5 cm of diameter, with 4 oblong petals with pointed apex, 1-2 cm long and 0,5 cm broad, of white or cream colour, numerous, more than one hundred, white stamina, 2,5 cm long, and style having the same length. The flowers, rich of nectar, emit by the nightfall a smell of mildew and honey that attracts bats, nectarivorous birds and insects that take care of the pollination.

The fruits are fairly fleshy oblong drupes, 5-9 cm long and of 2,5-5 cm of diameter, poisonous, of bluish colour when ripe and smell of mango (hence one of the common names), containing one seed only; the fruits are consumed only by the cassowaries (that originates another of its common names).

It reproduces by seed, that must be planted as soon as taken off from the fruit due to its very short lasting germinability, in draining organic loam maintained humid at the temperature of 24-26 °C. 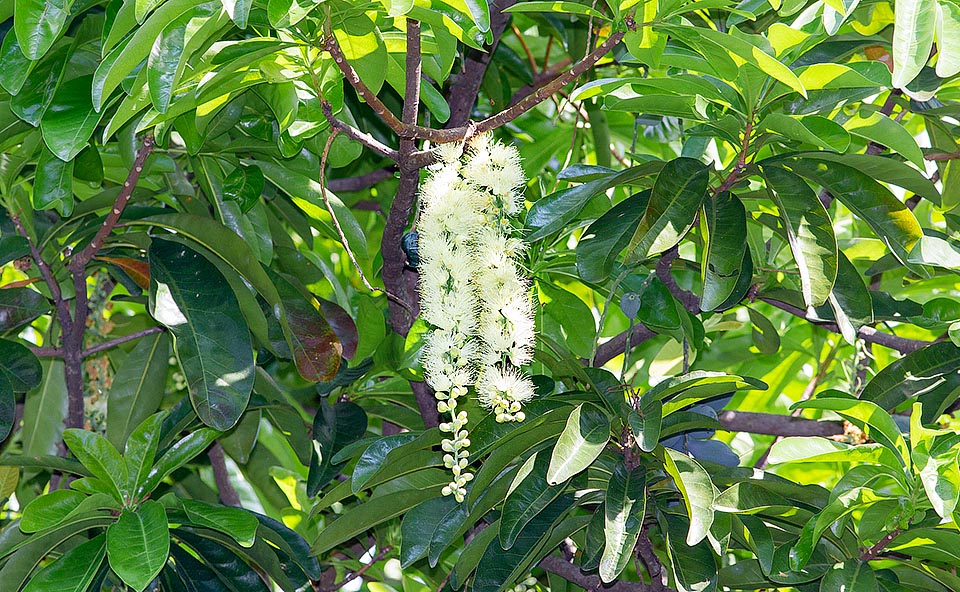 In the coastal pluvial forests, where often grows along water streams banks, at low altitudes the Barringtonia calyptrata can be 30 m tall. The long drooping inflorescences are rich of nectar and emit by nightfall a smalle of mildew and honey that attracts bats, nectarivorous birds and insects who care the pollination © Giuseppe Mazza

Tree with luxuriant foliage and attractive long inflorescences cultivable in the tropical and humid subtropical climate zones as ornamental in parks and vast gardens and as road tree.

It requires full sun and is not particular about the soil, from slightly acidic to slightly alkaline, preferably maintained constantly humid, even if it can bear drought periods, but with less abundant growth. The wood, clear, morbid, of good quality, that reminds that of the pine family, hence several common names, has various utilizations at local level, whilst from the bark they get resistant fibres. 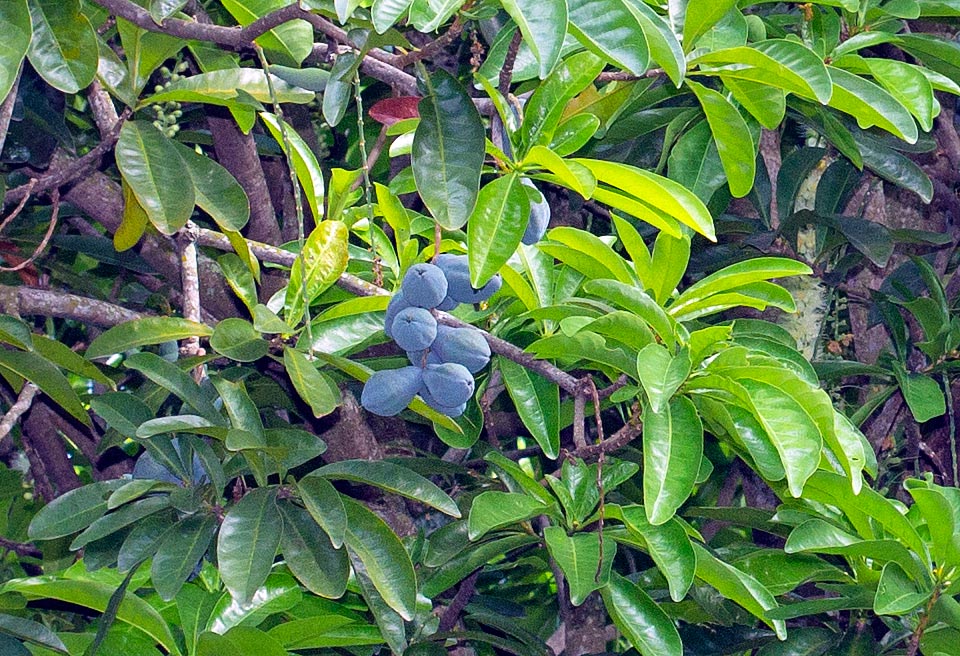 The 5-9 cm long fruits are poisonous. Bluish when ripe, smelling mango, are consumed only by cassowaries. Seeds and bark of Barringtonia calyptrata are used by Aboriginals to stun fish and facilitate catching. Leaves and bark decoction is used in traditional medicine for chest pains and fever conditions © Giuseppe Mazza

Seeds and bark are used by the Aboriginals for stunning the fish and facilitate the catching, whilst the decoction of leaves and bark is utilized in the chest pains and in the feverish conditions.