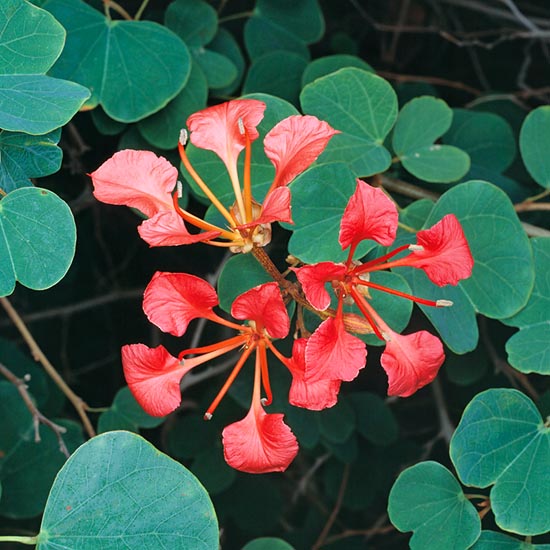 This species is native to southern Africa (Mozambique, South Africa, Zambia and Zimbabwe), where it mainly grows at the edges of the woodlands, along the rivers and on the rocky slopes up to about 1200 m of altitude.

The Bauhinia galpinii N. E. Br. (1891) is an evergreen or semi-deciduous shrub of medium size, 3-4 m tall, with greyish bark and long and flexible branches which often lean on the nearby trees or other shrubs.

The alternate leaves are bilobed with rounded extremities, 3-5 cm long and 3-7 cm broad, of a pale green colour.

The inflorescences, produced in summer on the terminal portion of the branches, are formed by axillar racemes carrying 2-10 flowers of 5-7 cm of diameter with five dark salmon to brick-red petals and three stamina. The fruits are flat, woody, pods with sharp apex, dehiscent (which spontaneously open when ripe), of dark reddish brown colour, 10-12 cm long and containing seeds of the same colour of about 1 cm of diameter.

It reproduces by seed which is better to scarify and keep in water for 24 hours for accelerating its germination, before being planted in a sandy soil kept humid at the temperature of 20-24 °C. 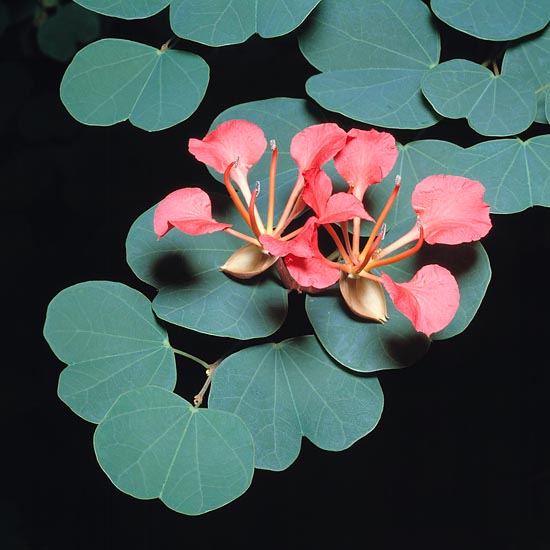 The quite unusual leaves are alternate, bilobed with rounded tips © Giuseppe Mazza

The first blooming takes usually place after two, three years from the sowing.

Species of great ornamental and landscape value to be cultivated in full sun in the tropical, subtropical and warm temperate climate zones, as it can bear, when adult, with at least three years of age, even -5 °C for a quite short time, but with damage to the aerial part; once well rooted it may resist also to long dryness periods.

It is not particularly demanding about the soil, even if poor, provided well draining, but with preference to the neutral or slightly acidic ones, in alkaline soils it may show signs of iron chlorosis.

It bears pruning, even drastic and may be grown as small tree, as semi-climber on other vegetation or on barriers and pergolas or on trellis against a wall, but also as isolated specimen.

The watering must be regular in summer, reduced in winter, if necessary, during the dry periods.

It may be cultivated in pot with soil rich in humus with addition of sand or agri-perlite by around the 30%.

The flexible branches are utilized by the local populations for realizing baskets and other handicrafts, whilst the seeds and the roots are used in the traditional medicine.