The species is native to Indonesia, Malaysia and Thailand, where it grows in the evergreen forests preferably along the banks of the rivers.

The genus is honoured to the brothers Jean (1541-1613) and Gaspard (1560-1624) Bauhin, Swiss botanists, due to its bilobed leaves; the name of the species is the combination of the Latin terms “integer” = entire and “folium” = leaf, with obvious reference.

The Bauhinia integrifolia Roxb. (1832) is an evergreen woody climbing species which anchors to the supports by means of simple or tri-parted cirri, with smooth bark but in the young branches which are covered by a rust-coloured tomentum. The leaves, on a 2-5 cm long petiole, are alternate, ovate to orbicular, bifid or entire, 8-15 cm long, with 9-11 nervations, the floral leaves are cordate with petiole and woolly nervations. 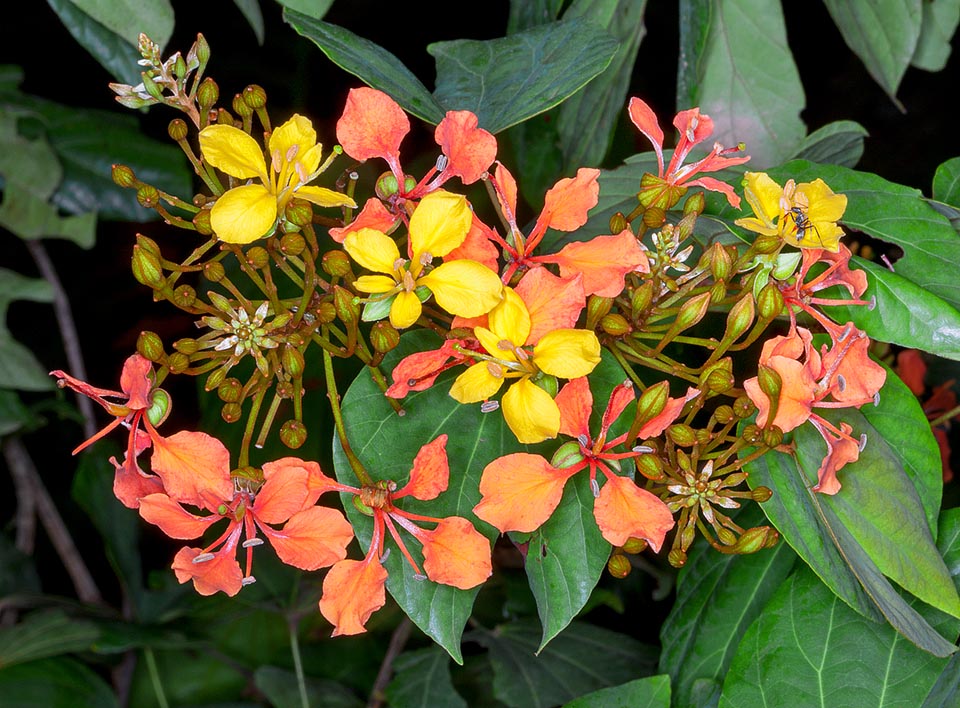 Bauhinia integrifolia is a woody climber of Indonesia, Malaysia and Thailand forests where it mainly climbs with its cirri the plants coasting the rivers. The leaves may be bifid or entire. Terminal and axillar corymbose inflorescences. The initially yellow petals of flowers turn with time, like other Bauhinia, orange or red © Giuseppe Mazza

Terminal and axillar corymbose inflorescences, great, covered everywhere by rust-coloured tomentum, carrying numerous small flowers with 5 unguiculate petals (petals with a long narrow base similar to a stem), 0,8-1,5 cm long with oval edge with undulated margin, initially yellow, then orange tending to red, and 5 stamina, shorter than the petals, of which two are sterile.

The fruits are oblong, dehiscent (which open spontaneously when ripe) legumes, up to about 20 cm long and 3-5 cm broad, containing 5-8 flat, roundish, seeds, of 2 cm of diameter. It reproduces by seed which is better to scarify and keep in water for 24 hours, in order to accelerate the germination, before planting it in sandy loam kept humid at the temperature of 22-24 °C.

It is a climber with long and showy blooming cultivable exclusively in the tropical and subtropical climate zones, in full sun or slight shade, with lowest temperatures preferably over the 14 °C.

It is not particular about the soil; even if poor provided well draining; young plants are to be regularly irrigated in the zones characterized by long warm and dry summers. It can be made to climb on other vegetation, barriers, fences and pergolas.