The species is native to Brunei, India, Indonesia, Kalimantan, Peninsular Malaysia, Philippines, Sabah, Sarawak, Singapore, Sulawesi and Sumatra where it grows in the forests at the margins of the clearings or climbing on the trees up to cover the top, from the sea level up to hilly altitudes.

The genus is honoured to the brothers Jean (1541-1613) and Gaspard (1560-1624) Bauhin, Swiss botanists, due to the bilobed leaves ; the specific name is the combination of the Latin prefix “semi-” = half and the adjective “bifidus, a, um” = bifid, with reference to the shape of the leaf.

The Bauhinia semibifida Roxb. (1832) is an evergreen perennial sarmentose shrub, rather variable, that may exceed the length of 9 m, with stems that at the base can reach the 10-15 cm of diameter, provided of simple, woody and persistent cirri with which it anchors on the supports; the young branches are covered by a ferruginous tomentum. The leaves, on a 2-5 cm long petiole, are alternate, bilobed with oblong-linear lobes with obtuse apex, 5-10 cm long and 4-8 cm broad, orange when young, then green above, grey-green below with a fine brown-orange tomentum at the base and along the nervations.

The inflorescences, on an about 4 cm long peduncle, are terminal erect racemes, up to 20 cm long, bearing numerous hermaphroditic flowers white tending to pale yellow, fragrant, opening in succession starting from the bottom. 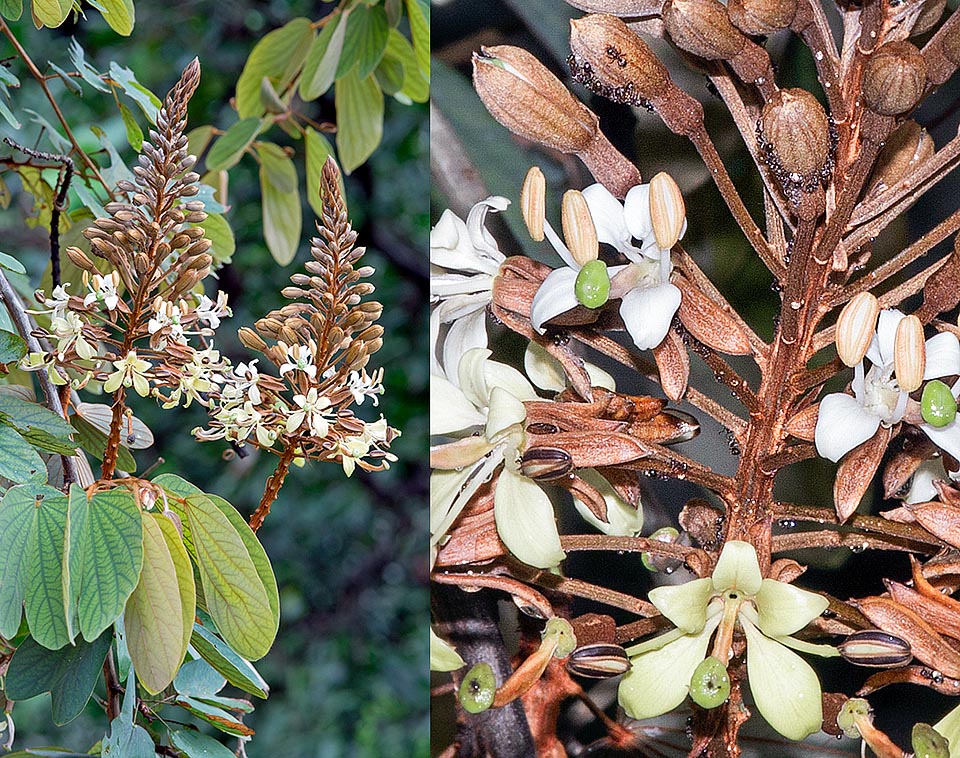 The Bauhinia semibifida is an evergreen sarmentose species of tropical Asia with solid cirri and woody stems that may reach the length of 9 m with a diameter of 10-15 cm at the base. The flowers have an opening at the base of the style, well visible in the right enlargement, that gives hospitality to several ants happy to get nourishment and shelter at same time. The powdered roots are sometimes used in the traditional medicine by the populations of the tropics to relieve the fatigue © Giuseppe Mazza

Tubular calyx expanded at the base, 0,6-1 cm long, with 5 oblong-linear, retroflexed, deciduous lobes, 2-2,5 cm long and 0,4 cm broad, corolla formed by 5 oblong unguiculate petals (petals with the base long restricted similar to a stem), about 2,5 cm long and 1-1,5 cm broad, fertile, white, 3 filaments, 2,5-3 cm long, with oblong 1,2 cm long anthers and two sterile ones, small and filiform, robust style with peltate discoid stigma of about 0,6 cm of diameter; peduncle, rachis, petioles and outer surface of the calyx are covered by rusty tomentum.

The flowers have an opening at the base of the style that hosts several ants. The fruits, produced rarely, are oblong brown legumes, 10-20 cm long and 3-4 cm broad, dehiscent in explosive way, with 4-6 roundish seeds, flat, of about 1,2 cm of diameter. It reproduces by seed, previously kept in lukewarm water for two days, in aerated and draining organic loam maintained humid at the temperature of 22-24 °C, by cutting and air layering. Very diffused species in the origin areas, but little known elsewhere, in spite of the undoubtful ornamental characteristics of the foliage and of the long-lasting inflorescences. Utilizable in the tropical and subtropical climate zones with high temperatures and humidity, constant all the year round, in full sun and on well drained and fertile soils, for covering fences, trellises and arbors, with regular prunings for maintaining a compact shape. Cultivable also in capacious containers, in organic loam with addition of siliceous sand or agri-perlite per a 30%, for being sheltered in the less favourable climates in greenhouses or winter gardens in very luminous position, with lowest temperature values not under the 15 °C. The waterings must be regular, but without stagnations, and the fertilizations, in spring-summer, done with balanced products with microelements.

The powdered roots are used in the traditional medicine of some populations for relieving the fatigue.