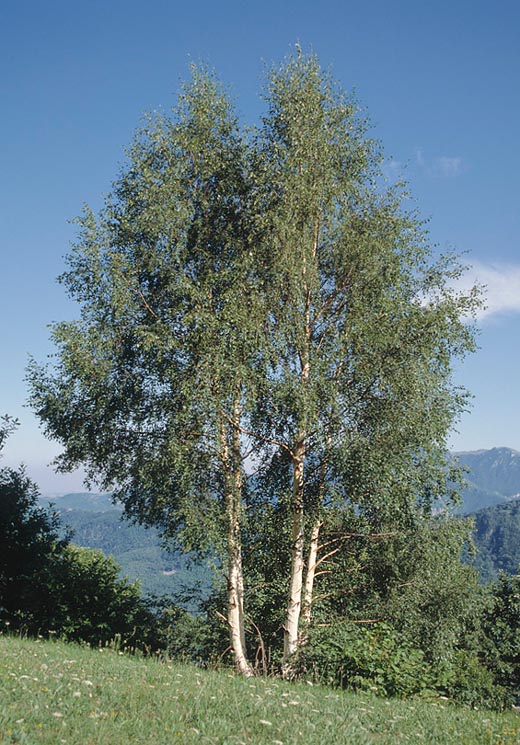 The Betula pendula Roth, (1788) is a species diffused in Europe, Asia and North America.

It grows in sparse woods, moorlands and thickets, from the hill belt up to the sub-alpine one, on fresh and light soils, preferably acidic.

It can form pure woods or woods mixed with Scots pine, larch, chestnut, beech and other broadleaved trees.

The term “pendula” refers to the terminal branches, thin and bent downward.

The term “verrucosa” refers to the greyish-white resinous warts present on the young branches.

It is a tree which may reach the 30 m of height and 60 cm of diameter of the trunk. The bark of the branches and of the trunk is white and smooth, speckled with lenticels.

In the old specimens, the bark at the base is darker and fissured.

The leaves are petiolated (1-3 cm petiole), have triangular shape or similar to a rhombus, sharp apex and doubly indented margin. The upper lamina is darker and glossier than the lower one. When young, the leaves are tacky to the touch due to the presence of resin.

The flowers are amenta (pendulous inflorescences, thick and elongated), called also catkins. The male ones measure from 3 to 10 cm, appear by late summer and the pollen will ripe on the next spring.

The female amenta measure from 1 to 4 cm and bloom in April-May, at the same time of the appearance of the leaves.

The infructescences are pendulous, about 4 cm long. They are formed by achenes (dry fruits formed by a thin shell which encloses the seed) furnished of a wide membranous wing. The birch wood is utilized for fabricating furniture and floors. It s a good fuel and can produce a charcoal with high heating power. Once, its bark was utilized as roofs coverage.

It is a tree which loves the light and adapts also to poor and sandy soils. Like the Betula pubescens, it is an important colonizing species. It stands among the first species appearing as pioneer species in the open lands and is widely utilized in the reforestations, after fires or landslides or in the naturalization of degraded soils.

Due to its beauty, it is a tree amply cultivated in parks and gardens, in group as well as isolated, even if it is not living long time (it rarely exceeds the 60-70 years of age). It is loved and appreciated for the luminosity of its clear trunk, for the lightness of the foliage, for its resistance to the urban pollution. 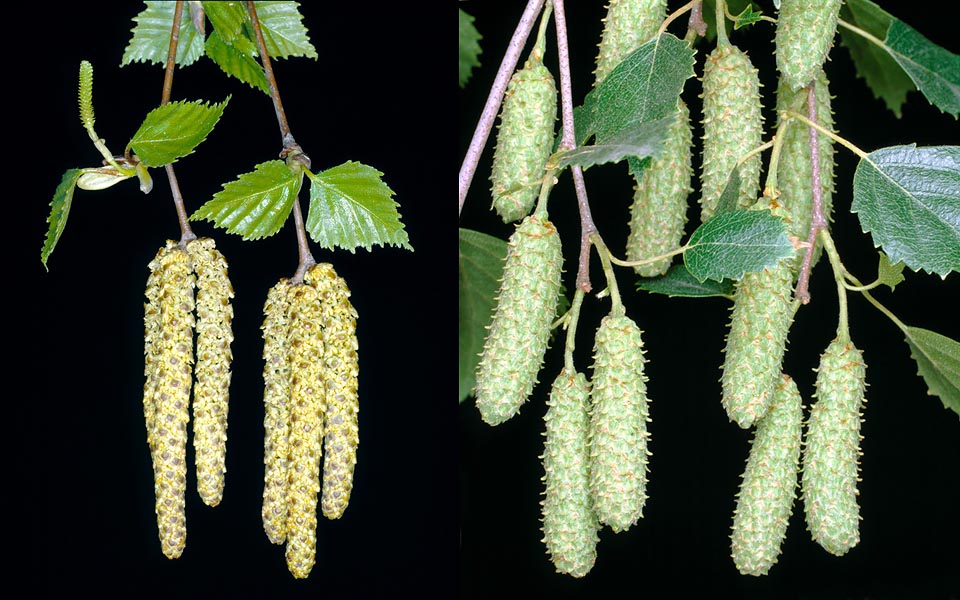 In some countries, in spring, they extract from the trunk the sugary sap from which they get by fermentation a slightly alcoholic beverage.

The buds, the bark of the young branches and the leaves do contain several active principles (tannins, resins, essential oils) and are utilized for facilitating the diuresis, increasing the fluidity of the bile, and decrease the cholesterol level in the blood.

The birch boasts also antiseptic, astringent and lenitive properties, utilized in cosmetics for improving the balance of the greasy or acned skins.

→ To appreciate the biodiversity within the BETULACEAE family please click here.