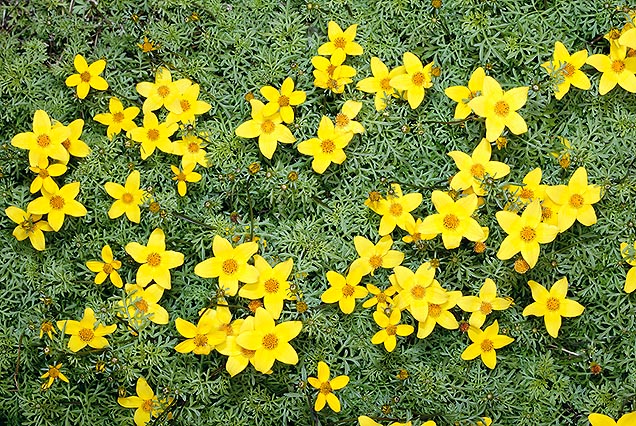 The plant is native to USA (Arizona and Texas) and Mexico (Sonora), where it grows mainly in sandy soils up to 1.600 m of altitude.

The name of the genus comes from the Latin “bidens” = bidental (from “bis = twice, and “dens” = tooth), with reference to the two bristles present on the fruits of some plants of the belonging to the genus; the name of the species is the combination of the name “ferula” and the Latin word “folia” = leaf, due to the resemblance of the leaves to those of the genus Ferula (in particular those of Ferula communis).

The inflorescences are a compound flower head, that is, formed by a main axis with ramifications, 2,5-5 cm long, ending in a flower head of 3-5 cm of diameter, the typical inflorescence of the Asteraceae. The flower head is formed by a host of sessile flowers, spirally inserted on a roundish base, the receptacle, surrounded by an involucre formed by a double series of linear or elliptic bracts, of green colour the 7-8 external ones, yellowish the 6-7 inner ones, 4-6 mm long and 1-2 mm broad.

The flowers of the outer ring, called ray florets, usually 5 (more in some cultivars), do have the ovate corolla with tridentate apex, 1-1,5 long and about 1 cm broad, formed by five united petals of yellow colour. The ray florets are sterile and have the function of attracting the attention of the pollinator like the petals of a single flower. 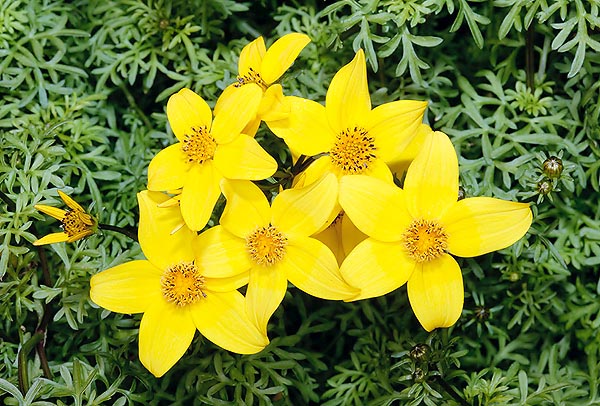 Inside the ring are located 50-60 bisexual flowers, called disc florets, with a tubular 5-lobed corolla, about 5 mm long, of yellow colour. The fruits, containing one seed only, and called achenes (or, more correctly, cypselae), in the Asteraceae, are 4-7 mm long with 2 rigid bristles, 1,5 mm long, equipped with microscopic turned backward scales, which have the function to help their dispersion by means of the animals (zoophilous dissemination).

It reproduces by seed, in winter in sheltered location (it germinates in 2-3 weeks at the temperature of 15-18 °C), or directly on the ground in spring, by apical cutting in spring or autumn and by division; it easily self-disseminates. It is the most cultivated species of the genus Bidens, appreciated for its fast growth, the slightly curved and subdivided foliage which recalls that of the ferns, and the abundant, bright and long-lasting blooming, from spring to late autumn.

For a better development, it needs full sun and is not particularly demanding about the soil, even if it prefers clayey, draining soils and regular fertilizations. It resists to the high temperatures, to the wind and to short drought periods. For this reason it may be also utilized in desert gardens, but it takes advantage from regular watering in the warmest periods; it well stands the pruning, also the drastic renewal ones, which are to be done by early spring or by the end of the blooming in late autumn.

It is utilized for hedges, as soil cover, rocky gardens, but the most common utilization is as pot plant for the decoration of balconies, terraces and patios; in particular, due to its drooping gait, is ideal for hanging pots.