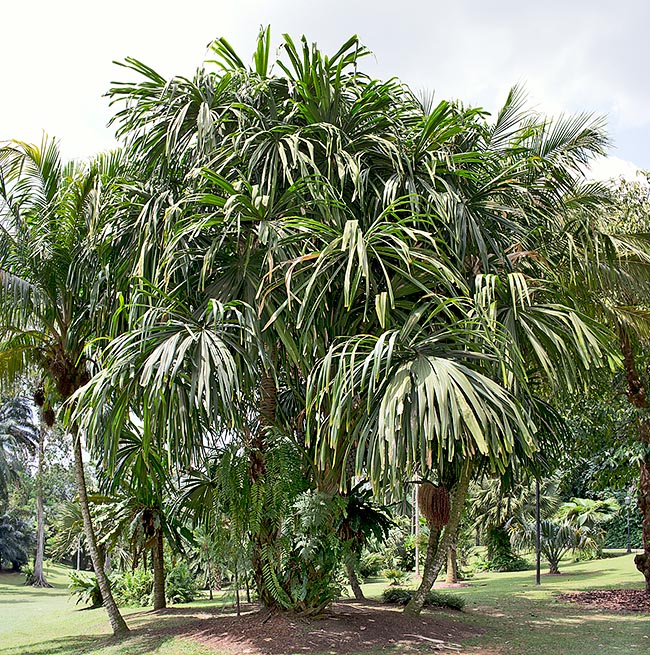 The species is native to northern Peninsular Malaysia and southern Thailand where it grows in the pluvial forests on calcareous hills up to 500 m of altitude.

The Borassodendron machadonis (Ridl.) Becc. (1914) is a dioecious species (each individual carries only either male flowers of female ones), unarmed, with single, erect stem up to 15 m tall and with 30 cm of diameter, of greyish colour, on which are visible the close rings trace of the attachment of the fallen leaves.

The leaves, on a 2-4 m long robust petiole, deeply grooved and with parti- cularly sharp margins, are numerous, induplicate, slightly costapalmate, suborbicular, 1,8 m long and 1,2 m broad, divided almost to the base in several linear segments, truncated at the apex and slightly drooping, of glossy dark green colour; the hastula (appendage placed in the insertion point of the foliar lamina with the petiole) is well developed. Inflorescences among the leaves, the male ones with 1-5 secondary ramifications similar to amenta, about 35 cm long, with flowers having a corolla formed by three 0,9 cm long lobes of whitish colour. 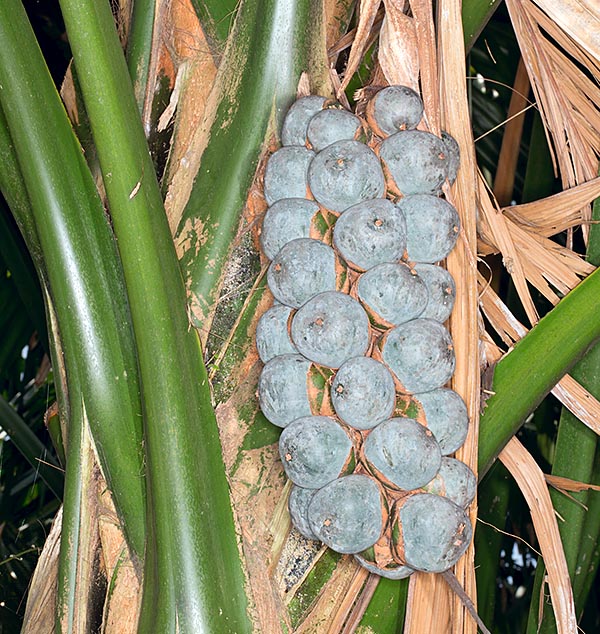 Globose fruits of about 10 cm of diameter of purple to blackish colour usually containing three oblong pyrenes, with slightly triangular section, about 7 cm long, containing a seed deeply grooved of about 4 cm of length.

It reproduces by seed in sandy loam rich of organic substance at the temperature of 24-26 °C, utilizing fairly deep containers, with germination times of 2-4 months; the first leaf is palmate with about 5 segments.

Imposing species and of great ornamental and landscape value when employed in parks and in very wide gardens, isolated as well as in group or in rows, of rather slow growth, in particular in the less favourable climates, it is cultivable in the tropical and subtropical humid climates as it does not stand values of temperature close to 0 °C if not exceptional and for a very short period.

It requires a position in full sun or slightly shaded and sheltered against the strong winds which would cause harm to the leaves, is not particular about the soil provided the same is deep, well drained and kept humid; particular care is to be paid to the cutting edges of the petioles which may cause deep wounds.

The natural populations have remarkably reduced due to the alimentary use of the buds, so much to be inserted, as “vulnerable” (species at extinction risk in nature), in the red list of the IUCN (International Union for the Conservation of Nature).