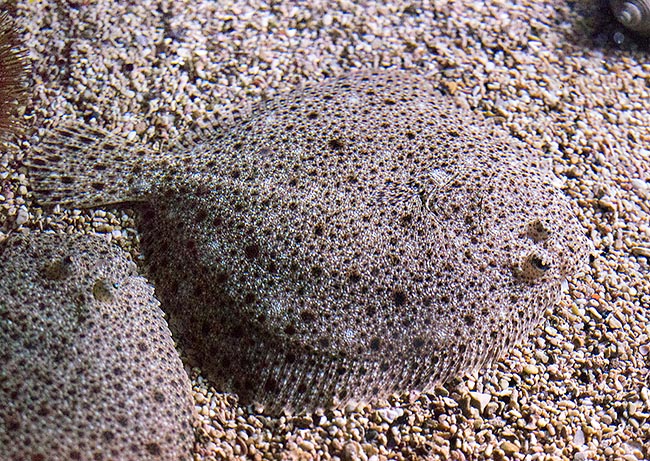 The Wide-eyed flounder (Bothus podas Delaroche, 1809), belongs to the class of the Actinopterygii, the ray-finned fishes, to the order of Pleuronectiformes and to the family of Bothidae.

The name of the genus “bothus”, after the contemporary Rafinesque (1810) who has created it, is the one which after him, Aristotle was giving to this group of fishes. But “bothus” does not appear to be a Greek name and there is not a clear connection with Aristotle. On the other way, in several European languages, starting from 1200, we find the roots “bot, both, bott” for indicating some flat fishes, and therefore, probably, in good faith, Rafinesque has attributed them to Aristotle.

The name of the species comes from the Greek “podas” = foot, with possible reference to the shape of the animal.

The wide-eyed flounder is present in all the Mediterranean, apart the Black Sea. It is however scarce on the eastern coasts from Libya to Greece. After Gibraltar Strait, we find it only southwards. It goes along the African coasts up to Angola, after having colonized the Azores, Madeira, Canary and Cape Verde Islands.

It is a fish living usually at few metres of depth close to the coasts, but which, especially in winter, when it gets cold, may go down to 400 m. It loves the sandy or pebbly bottoms, on which it rests, imitating them perfectly. This is a classical example of homochromy.

The wide-eyed flounder can reach the 45 cm of length, but, in the Mediterranean, it seldom exceeds the 20 cm. The body is oval, with both eyes on the left side. Those of the females are one close to the other, whilst in the males the are 2-2,5 time the maximum ocular diameter parted, with the left one in and advanced position, preceded by a small spine. Seen from top, the profile of the female is more roundish, also due to the enormous ovaries. 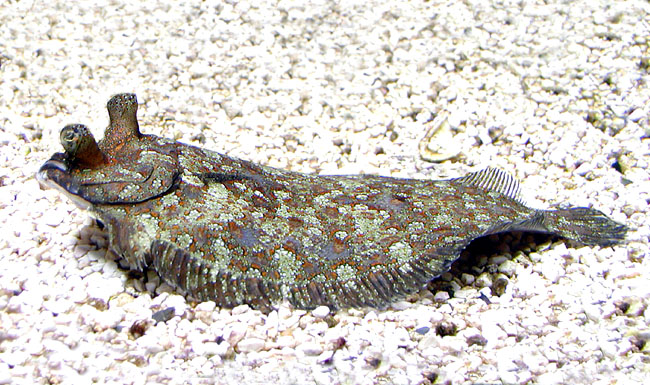 Young seen from above. It looks around then rebuilds surrounding colours and patterns © Giuseppe Mazza

The pectoral fin placed on the blind side, which touches the soil, is smaller than that on the upper side. It is in any case clear the wavy movement of the adults is entrusted mainly to the tail and to the dorsal and ventral fins. The wide-eyed flounders, when swimming, get quickly tired, but, step by step, with suitable resting breaks, they are able even to perform small migrations, for instance towards the locations more suitable for the spawning. The mouth is small, with tiny teeth, thin but pointed, placed in 2-3 rows on the jaws, but not on the vomer.

The colour of the visible side, which does not touch the soil, changes unbelievably depending on the nature of the bottom and the efforts of the chromatophores which, besides expanding or contracting the pigments, contain some guanine crystals which discompose the light with different effects depending on the inclination. The eyes, raised as periscopes, observe well what stands around, and the brain gives the necessary orders for rebuilding the landscape. So, if the whole is usually sepia-grey with pale and dark spots, these ones may change in shape and colour, at times they are bluish, at time greenish and even reddish. There are also more or less albino individuals, and others pigmented on both sides.

The wide-eyed flounder nourishes mainly of invertebrates, usually small molluscs and crustaceans, but also of small fishes it hunts in ambush. It reproduces from May to August. The eggs, spawned in thousands in the zones more favourable for the nourishment of the larvae, are planktonic. They drift away and will hatch in a couple of weeks. When the young reach about the 5 cm, the metamorphosis begins. The head turns whilst the right eye migrates on the left side (in other species, like the soles and the plaices it’s the contrary) and disappears the swimbladder, present in the larvae, which is cumbersome and of no use for the life on the bottom.

Even if due to the modest dimensions of the wide-eyed flounder this is fished by chance, the species is relatively vulnerable because for doubling its population 4,5 to 14 years are necessary. Its vulnerability index is of 55 over 100.