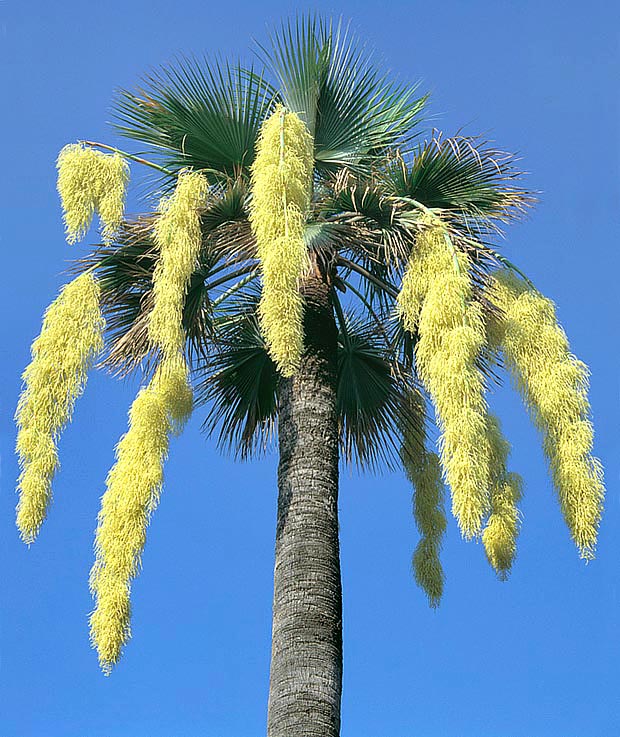 The 5-6 m inflorescences of Brahea armata stand among the most decorative of the palms family © G. Mazza

The Brahea armata S. Watson (1876) is native to North-western Mexico (Baja California and state of Sonora), it grows in rock canyons, where water is present, from the sea level up to more than 1000 metres of altitude.

The name of the genus is dedicated to the Danish astronomer Tycho Brahe. The one of the species, refers to the thorns at the edges of the petiole.

It is commonly known in the English-speaking countries with the names of “Blue hesper palm”, and “Mexican blue palm”.

Of slow growth, it presents a solitary trunk, tall even more than 10 metres, of 40-50 cm of diameter, covered of persistent dry leaves. The leaves are slightly costapalmate, rigid, covered by a grey-bluish waxy stratum, very striking, on petioles provided of bent whitish thorns.

The curved inflorescences, reaching 5-6 metres in length, and extending beyond the leaves, are between the most ornamental of the palm family, the flowers, hermaphrodite, of white-cream colour, are followed by ovoid fruits, brown when ripe, long about 2,5 cm.

It reproduces by seed, which, if fresh (within few months from the ripening), germinates in about four months, if with bottom heat.

It is, without any doubt, one of the most ornamental palms, due to the colouring of the foliage and the showy inflorescences.

It resists to the cold, even if down at -10°C, and also some grades less, with slight damages to the foliage, in well drained soils. Its main exigencies are full sun and a very good drainage, on the other hand, it adapts to poor alkaline soils, and, when adult, can tolerate long drought periods.