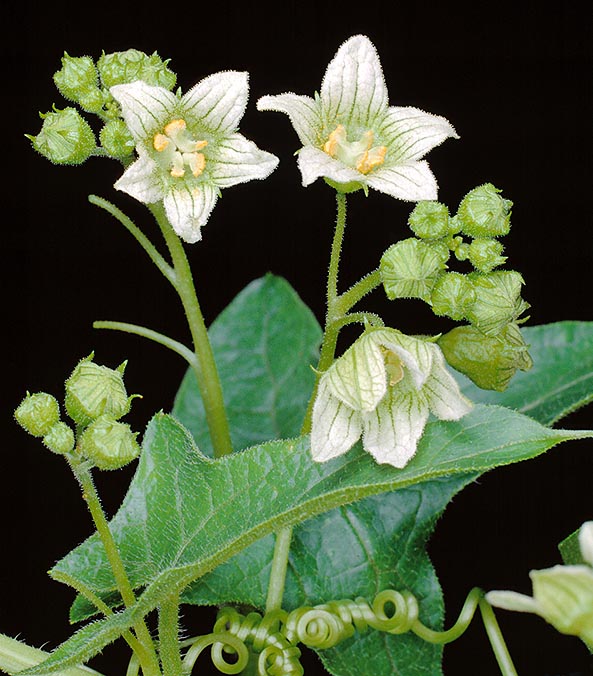 In the genus Bryonia are included, after various authors, 10 to 12 species distributed in Europe, Asia, North Africa and Canary Islands.

Following are those present in Europe:

The name of the genus comes from the Greek term “bryo”, meaning plant with vigorous shoots. The names of the species (cretica) and of the subspecies (dioica) come respectively from the Latin “créticus”, of Crete Island, and from “diòicus”, that is, species with male and female flowers carried on different plants.

The common bryony is a perennial plant, rough because covered by short hispid hairs and with enlarged base, with numerous short voluble (that is, climbing) herbaceous stems, angular-quadrangular, tender and frail when young, then fibrous when adult, 0,50 – 2-3 (4) m tall, equipped with simple, axillar cirri, spirally wrapped, and with a large tuberous root similar to a turnip that may even exceed the 6-8 kg of weight. 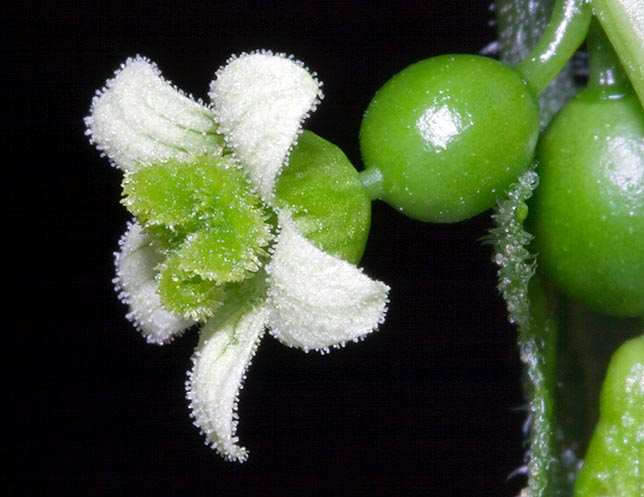 As old nomenclature states, there are male and female plants. Here a fecundated lady forming the fruit. The Bryonia cretica dioica is a perennial herbaceous species with various voluble stems, even 4 m long © Giuseppe Mazza

It is a dioecious plant with small white-yellowish flowers with green nervations of the longitudinal petals; the male flowers (up to 17), in axillary racemes with glandulous pedicels, without elongated simple hairs, the female flowers (up to 7) in corymbs with peduncles having scattered glands.

Calyx with 3-4 mm lobes, lanceolate and acuminate, 5-lobed corolla, in the 8-13 mm male flowers, that of the female flowers, 3,5-6,5 mm, corolline tube with scattered glands or glabrous.

The blooming occurs from (April) May to June. The fruits are 7-8 (10) mm spherical berries, smooth, glabrous, green when young then orange and finally coral red when ripe. 4-6,5 x 5,5 mm seeds, flat-convex or bi-convex, ovoid, with granulose-pruinose surface; each berry contains, as an average, 3-4 (<6) of them. The fructification goes on from June to August. The bryony lives from the plain up to 800 (1200) metres of altitude at the margin of the riparian woods, along the fences and the banks of the ditches, humid places, uncultivated ones and ruins. This plant was already known in the old times, known for over 2000 years, and was employed as officinal plant by Hippocrates (460-380 BC), Dioscorides (De Materia Medica, 64 AC) and Pliny the Elder (Naturalis Historia, ca. 77 AC).

The whole plant produces active principles with high toxicity; in particular the root, the berries and the seeds do contain various triterpenic glycosides known as cucurbitacins like the bryonin and the bryonidin which act at gastro-intestinal level causing a strong irritation to the mucosae, violent pains with nausea, vomit, diarrhoea, colics, bleeding and hematuria (presence of blood in the urines); in the most serious cases, appear vertigoes, convulsions and respiratory paralysis. Due to its energetic congestant action on the urogenital system in the past it was employed with abortifacient purposes, often with fatal results.

In the countries, they did collect the root inn autumn, clean it and cut horizontally in the point of greatest diameter, then with a knife they dug a cavity inside the pulp and this was filled up with sugar. After twelve hours, they got syrup employed at the dose of 2-4 teaspoons as a fast acting cathartic. 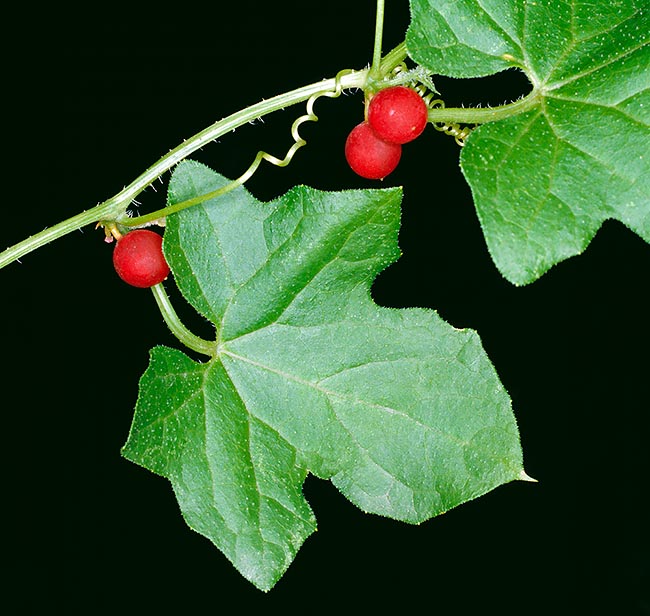 The whole plant is toxic, particularly roots and berries: 12 are enough to kill a child © Giuseppe Mazza

By warming in equal parts the grated pulp with suet and sulphur powder they prepared an ointment for eliminating the mites’ mange. An aged farmer, years ago, told me that he was preparing ratticide baits with the crushed berries of bryony and mixed (about 25 berries per kilo) with bran and small corn bran and that he had gotten excellent results.

Presently, its employment is limited to some homeopathic preparations for caring some pulmonary ailments. Recent researches have proved that the active principles of the bryony have cytotoxic action on the tumour cells, however, seen their strong toxicity, they are studying possibilities of employment not causing collateral damage to the body.

Amongst the numerous cases of poisoning caused by the bryonies, I report what happened in France about two centuries ago to a housekeeper of Paysie-Codon, site of France close to Aix, having put in a pot a root of bryony she thought to be a turnip, five persons having eaten the soup got poisoned and were saved in extremis. It is very strange that none of them had refused such bitter and nauseous meal, even if hidden by the cabbages, the celeries and other vegetables. The labourers were perhaps so much hungry to have lost the senses of taste and smell. We can righty say that “More than the flavour could the fasting!”

It is clear that the bryony, due to its toxicity (12-15 berries can kill a child!), must absolutely never be used at the family level.