Buds: from flower and from leaves… opening sequence

Flower gems and leaf gems. Complex physical, chemical and ambiental mechanisms ensure that they sprout only at the best moment for the plant. Spectacular photographic sequences of opening. 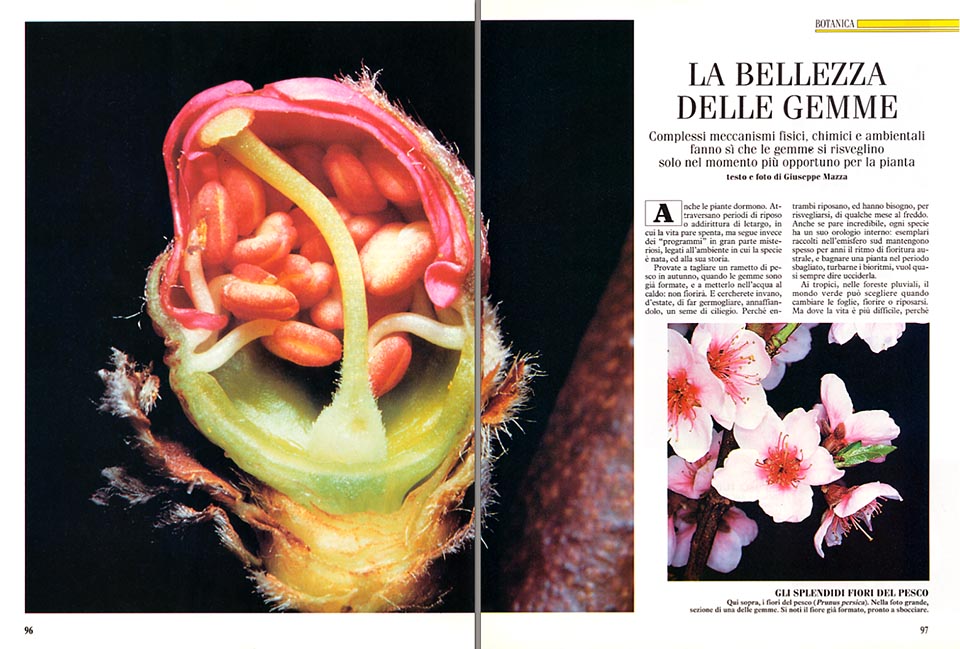 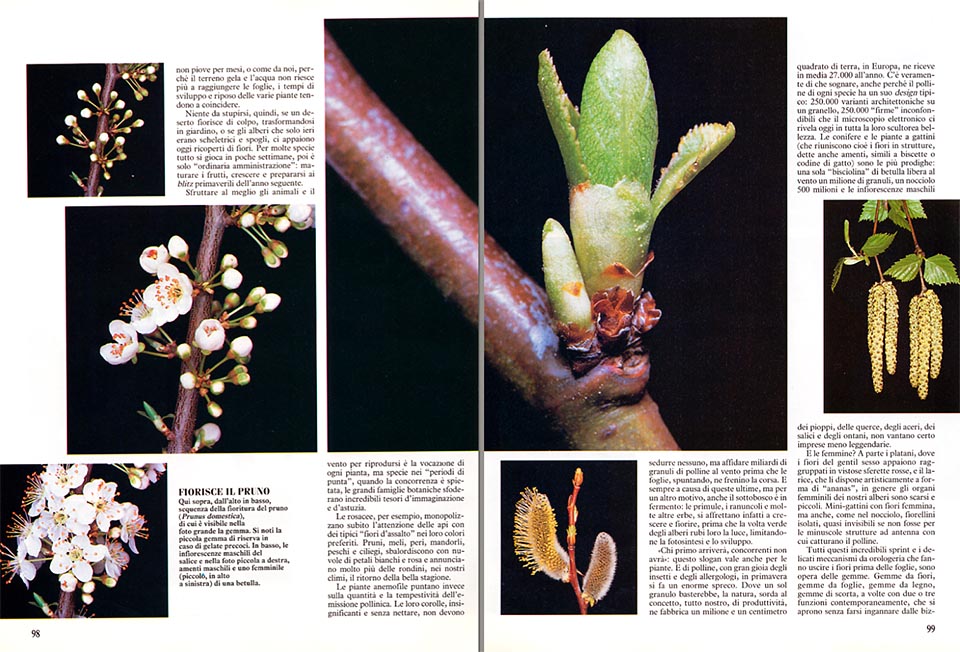 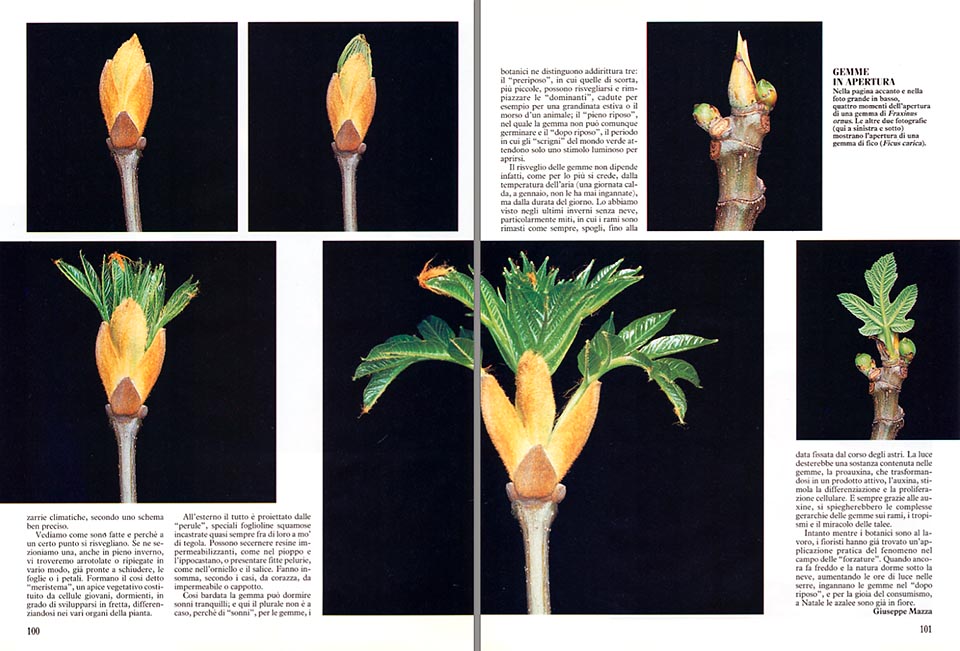 Also the plants sleep. They go through periods of rest or even of lethargy, where the life seems extinguished, but instead follows programmes, mostly mysterious, related to the habitat where the species was born, and with its history.

In order to understand them, we have to hold a profound chemical and botanical knowledge, or the St. Francis’ approach to nature; the left side of our brain, logical and deductive, or the right one, the intuitive, of artists, faith-healers, mystics, women, and of those, more prosaically, holding the green fingers.

Try to cut a small branch of a peach tree in autumn, when the gems are already shaped, and put it in water, and keep warm: it will not bloom.

And you will in vain try, in summer, to have a seed of cherry germinating by watering it.

That’s because both rest, and, to wake up, they need some months in the cold.

Even if it looks incredible, each species has its internal clock. Specimen picked up in the austral hemisphere, maintain often, for years, the rhythm of austral flowering, and to water a plant in the wrong period, troubling its biorhythms, means, almost always, to kill it.

In the Tropics, in the rainy forests, the Green World can choose when to change leaves, to flower or to rest. But, where life is more difficult, because it does not rain for months, or, like in our countries, because the ground freezes and the water cannot reach the leaves any more, the times of development and of rest of the various plants have the tendency to coincide.

Nothing to be astonished, hence, if a desert blooms suddenly, transforming in a garden, or if the trees, which only yesterday were skeletal and bare, look today covered of flowers. For many species, everything happens in few weeks; then, it’s only “ordinary business”: to ripen the fruits, to grow up, and to get ready for the spring “blitzes” of the next year.

To exploit in the best way the animals and the wind to reproduce, is the vocation of every plant, but especially in the “peak periods”, when the competition is pitiless, the great botanical families draw out incredible treasures of imagination and astuteness.

The rosaceae, for instance, monopolize immediately the attention of the bees with typical “onslaught flowers”, in their preferred colours. Plums, apples, pear, almond, peach and cherry trees, astonish with clouds of white and pink petals, and announce, much more accurately than swallows, in our climates, the return of the good season.

The anemophilous plants count instead on the quantity and the timeliness of the polliniferous emission. Their corollas, negligible and without nectar, must not seduce anyone, but must entrust the wind billions of granules of pollen, before that the leaves, while coming out, slow down their route.

And it is always due to these last, but for another reason, that also the under wood is in a ferment: the primroses, the buttercups and many other grasses, hasten in fact to grow up and bloom, before that the green vault of the trees subtracts them the light, thus setting a limit to the photosynthesis and the growth.

“First come, first served”, this well known saying applies also to the plants; and in springtime, in fact, there is an enormous waste of pollen with great joy of insects and of allergy specialists.

Where one only granule would suffice, the nature, ignoring the concept, completely human, of productivity, fabricates one million of them, and a square centimetre of soil, in Europe, gets an average of 27.000 granules per year.

There is really material for dreaming, also because the pollen of each species has its own typical design: 250.000 architectonic variations on a granule, 250.000 unmistakable “signatures”, which the electronic microscope reveals today to us, in all their sculptural beauty.

The conifers and the catkin plants (the non botanist to read: “which assemble the flowers in structures, called also aments, similar to small snakes or cat tails), are the most prodigal: only one “small snake” of birch frees to the wind one million of granules, a hazel, 500 million, and the masculine inflorescences of the poplars, oaks, maples, and of alders, are not much inferior.

And the females? But the plane-trees, where the flowers of the weak sex appear grouped in showy red small spheres, and the larch, which ranges them, artistically, in a “pineapple” shape, generally, the feminine organs of our trees are scanty and small.

Small catkins with female flowers, but also, as for the hazel, isolated small flowers, almost invisible, should not it be for the tiny antenna-shaped structures with which they seize the pollen.

All these “performances”, the incredible sprints, the delicate clock mechanisms which push out the flowers before the leaves, are action of the gemmae.

Flower gemmae, leaves gemmae, wood gemmae, spare gemmae, sometimes with two or three functions at same time, which open, not beguiled by the climatic oddities, following a definite plan, where every occurrence seems to be foreseen.

Let us see how they are done, and why they wake up at a certain moment.

If we dissect one of them, also in winter, we find inside, rolled up, or folded in various ways, already prepared for opening, the leaves or the petals.

They constitute the so called “meristem”, a vegetative apex formed by young cells, sleeping, able to develop quickly, differentiating in various organs of the plant.

Externally, the whole is protected by the “scales”, special small leaves placed like tiles. They can secrete waterproofing resins, as for the poplar and the horse-chestnut, or present thick hairs, like for the manna ash and the willow.

They act, in conclusion, depending on the cases, as shell, raincoat, or overcoat. Dressed up in such a way, the gemma can get deep sleeps; and here the plural does not stand by chance, as of “sleeps”, for the gemmae, the botanists distinguish even three of them: the “fore-rest”, where the spare gemmae, smaller, can wake up and replace the “dominant” ones, fallen, for instance, due to the summer hail or the bite of an animal; the “full-rest”, where the gemmae cannot, in any case, germinate; and the “after-rest”, the period where, cumulated the necessary cold, the “coffers” of the Green World wait only for a light stimulus to open.

And yes, because the awakening of the gemmae does not depend, as many think, from the temperature of the air (a warm day, in January, has never cheated them), but from the length of the day. We have seen this during last winters without snow, particularly mild, where the branches have remained, as always, naked till the date established by the course of the celestial bodies.

The light should awake a substance contained in the gemmae, the pro-auxin, which, transforming in an active product, the auxin, stimulates the cellular differentiation and proliferation. And, always thanks to the auxin, we might explain the complex hierarchies of the buds on the branches, the tropisms and the miracle of the cuttings.

In the meantime, while research chemists and botanists are working, the florists have already found a practical application of the phenomenon in the field of the “strains”. When it is still cold, and the nature sleeps under the snow, by increasing the hours of light in the greenhouses, they cheat the gemmae in the “after-rest”, and, for the joy of consumerism, the azaleas are already blooming by Christmas time.

Buds: from flower and from leaves… opening sequence was last modified: May 24th, 2019 by Giuseppe Mazza