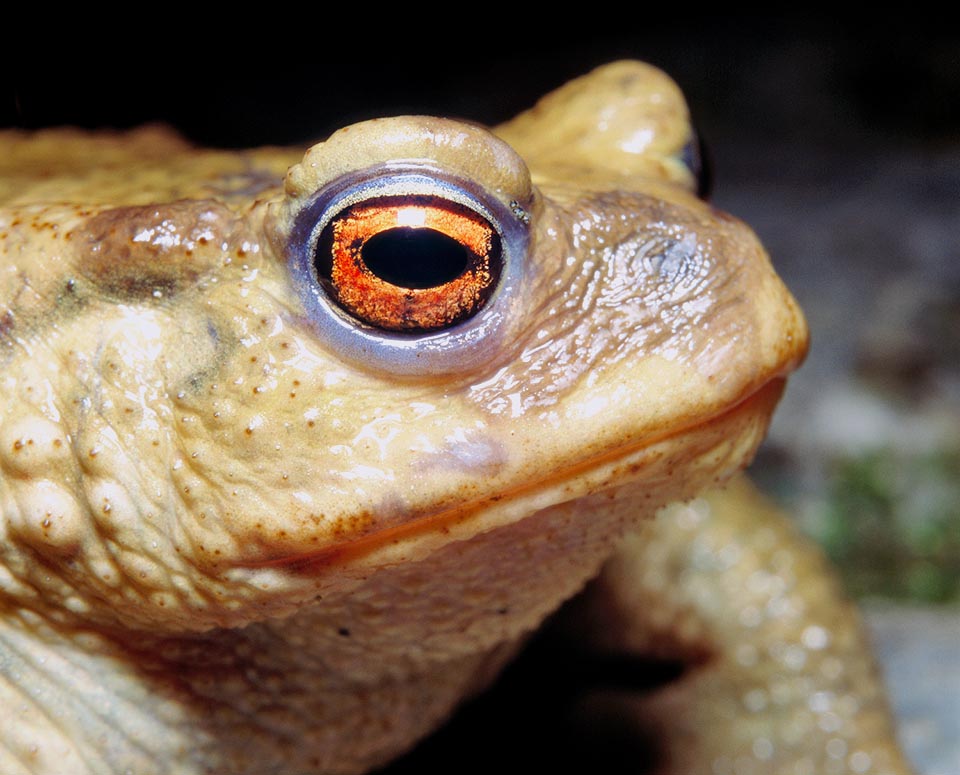 Present in almost all Europe, the Common toad (Bufo bufo) in Asia reaches Mongolia and has colonized Morocco and Algeria coasts © Giuseppe Mazza

The Common toad (Bufo bufo (Linnaeus, 1758)) belongs to the class of the Amphibia, the vertebrates that spend at least part of their vital cycle in the aquatic world, to the order of the Anura, the tailless amphibians, and to the family of the Bufonidae. The species is listed in the Appendix III of the Bern Convention of 1979 for the European Wildlife and Natural Habitats. The IUCN Red List records this species with the status of “Least Concern” (LC), whilst the IUCN Italian Committee registers it as “Vulnerable” (VU).

The name of the genus Bufo comes from the vulgar Latin “būfo”, in its turn from the Greek “βάτραχος” (vátrachos) = batrachian: term with which in some old zoological classifications the amphibians were indicated, and in particular the anurans, commonly known as frogs and toads.

The Common toad is present in North Africa (Morocco, Algeria and Tunisia), from eastern Siberia up to Kazakhstan, in Middle East (Turkey, Syria and Lebanon). 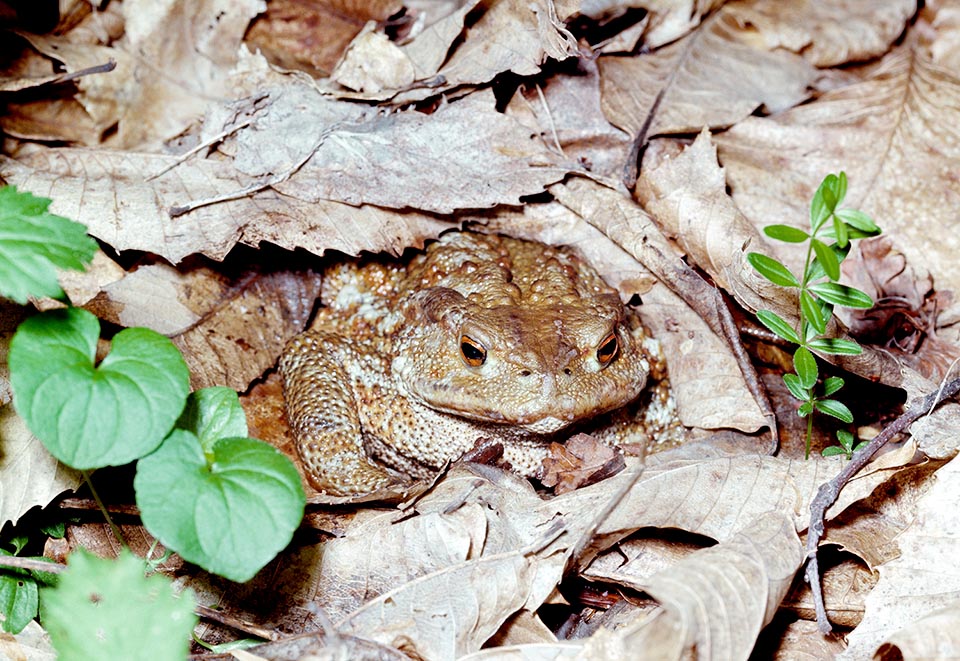 It mainly hunts by night, hiding during the day in rocky cavities or under the vegetation as thick as the litter of the woods © Giuseppe Mazza

We find it everywhere in Europe, but in some islands, such as Ireland, Balearic Islands, Malta, Crete, Corsica and Sardinia. Together with the Bufotes viridis it is the biggest member of the family of the Bufonidae.

Being a species able to adapt to different environments, we can find it in a wide range of habitats. Its necessity of humid environments shows up especially during the period of the reproduction, when it frequents lakes, rivers, ponds, ditches and marshes, zones with shallow still or slow flowing waters, to make the larvae develop.

It frequents mainly woods of broad-leaved trees or conifers with swampy or humid zones but we find it often also in agrosystems, orchards and gardens. It may be seen also in environments without water such as uncultivated arid areas and woods of Mediterranean shrubland. It avoids the open spaces due to the possibility of being preyed. They are mainly nocturnal animals and during the diurnal hours they take shelter in rocky cavities or under dense vegetation. The altitude goes from the sea level up to the 2000 m, even if it has been sighted up to the 3000 m. 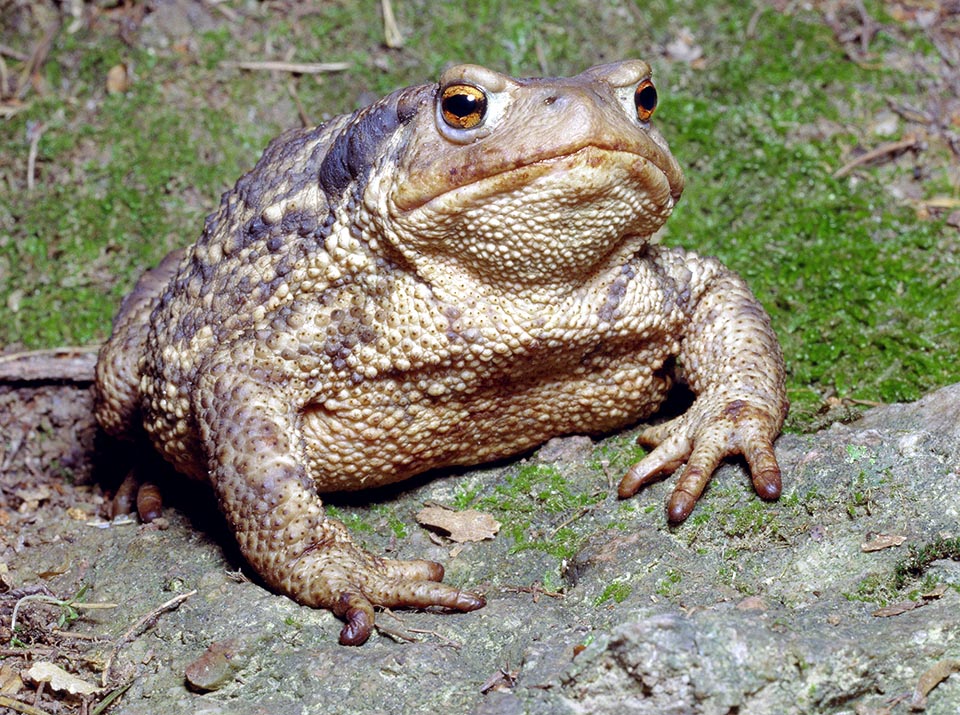 It lies in wait motionless, sitting, in the passage points, seizing all what gets close to its everted tongue: insects, molluscs, arachnids and small vertebrates © G. Mazza

Its build is quite stocky and sturdy, with short and rounded snout. The skin is rough and dry and presents several warts distributed all over the body. The colouration is variable from dark brown to dark red, or to yellowish grey, depending on the physiological state of the animal, the conditions of local humidity and of the season. Some more or less marked dark spots may be present above and form irregular longitudinal bands.

The eyes have an elliptic horizontal pupil, with coppery-golden colour. Behind the eyes are present large parotoid glands from whose pores, through a strong pressure, is expelled a white and poisonous substance that causes irritation to the eyes, nose and mouth, if, conversely, is injected into the blood vessels has poisonous effects. 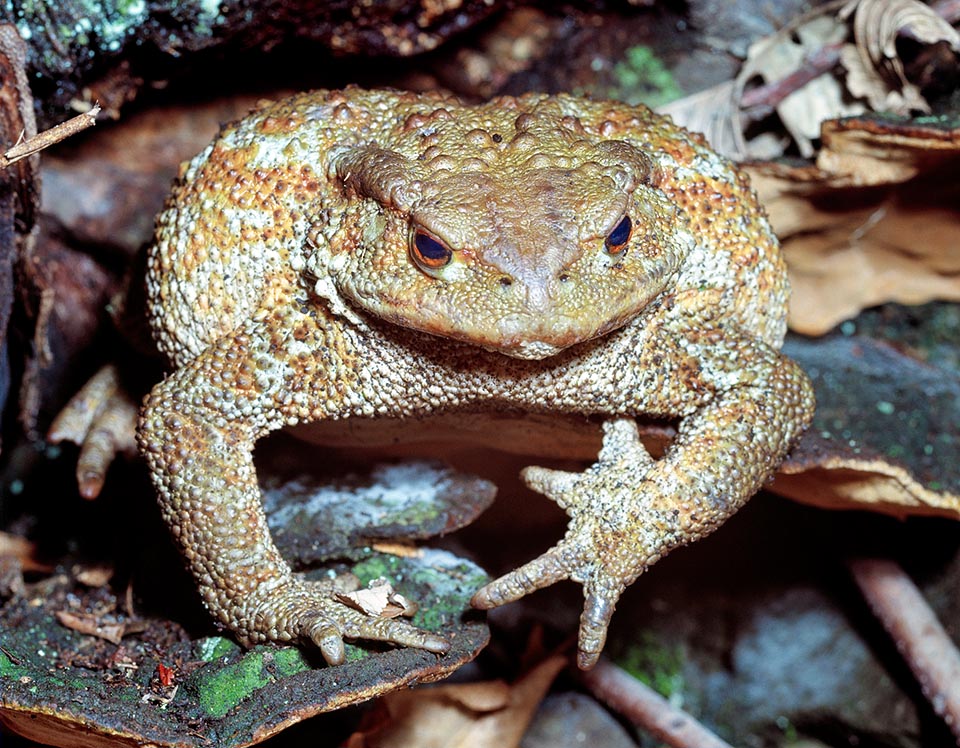 In its turn is preyed by ophidians of the genus Natrix, raptors and corvids. When in danger, it swells the body lowering the head and rises on the legs to look bigger © Giuseppe Mazza

The hind legs have 5 fingers, whilst the fore ones 4 and both display tubercles on the lower face of the palm. The dimensions are around the 20 cm, excluding the hind legs. The sexual dimorphism is little marked, the males are generally smaller and more slender than the females (about 10 cm), and have the hind limbs longer if compared to the body. During the period of the reproduction the males display 3 nuptial tubercles on the first three fingers and a carpal tubercle. These serve to the male for clinging to the axils of the female, in fact, their type of intercourse is called “axillar”.

The adults nourish mainly on the soil and their diet includes invertebrates such as ants, molluscs, insects and arachnids and at times small vertebrates. The method of hunting is defined as “sit and wait” and consists in remaining motionless until when the prey is so near to be caught with the help of the tongue. 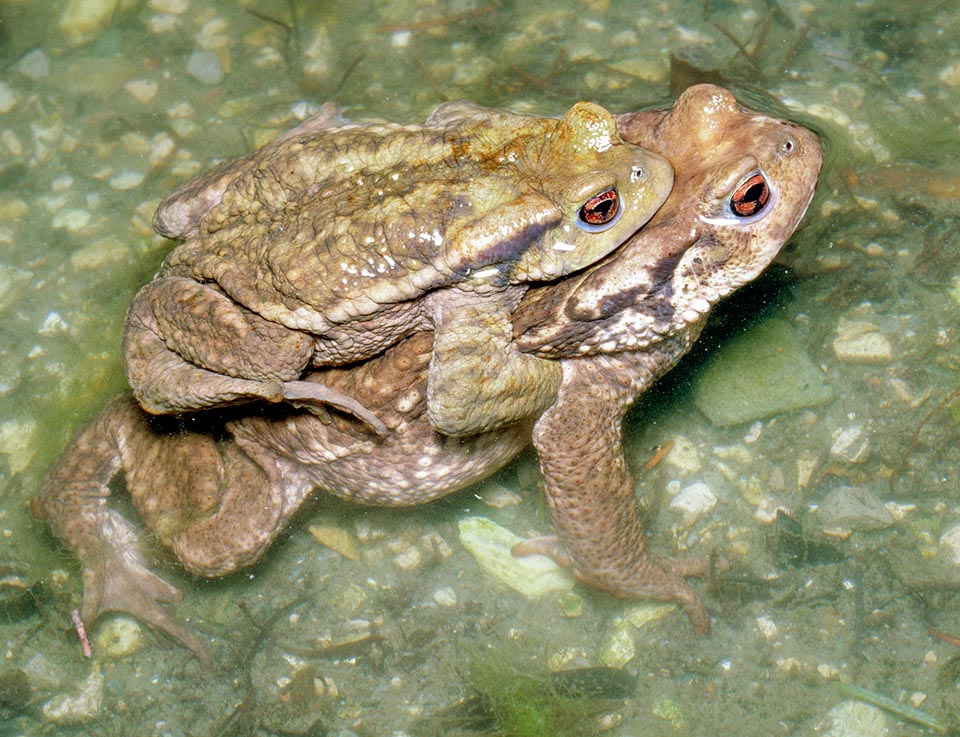 To reach the frega zones, where it reproduces regularly every year between March and June, when the temperature reaches the 12 °C, it often does mass migrations to sites placed even a kilometer far away. The males, seven times more numerous than the females, embrace them, to reproduce, with a solid axillar seizure © Giuseppe Mazza

When the toad feels menaced or is in danger, it swells the body lowering the head and rising on the legs, thus to appear bigger. The main predators of the adult toads are ophidians of the genus Natrix being immune to the poisonous secretions produced. Many birds of prey and corvids that nourish of toads peel them before with their beak, to avoid the poisonous substances contained in the skin, and eat the internal tissues. Among the parasitoids utilizing the Common toad as host we note the Lucilia bufonivora, a dipteran of the family of the Calliphoridae, that lays eggs on the nasal cavities of the toad and once born, the larvae will nourish of the eyes, brain and other tissues of the host.

The larvae display a real social behaviour. They nourish of vegetable matter such as algae, plants, plankton and organic residuals gathering in mass along the shore of the basin and when they must change grazing area, they move forming a compact group with a wide front or in procession. 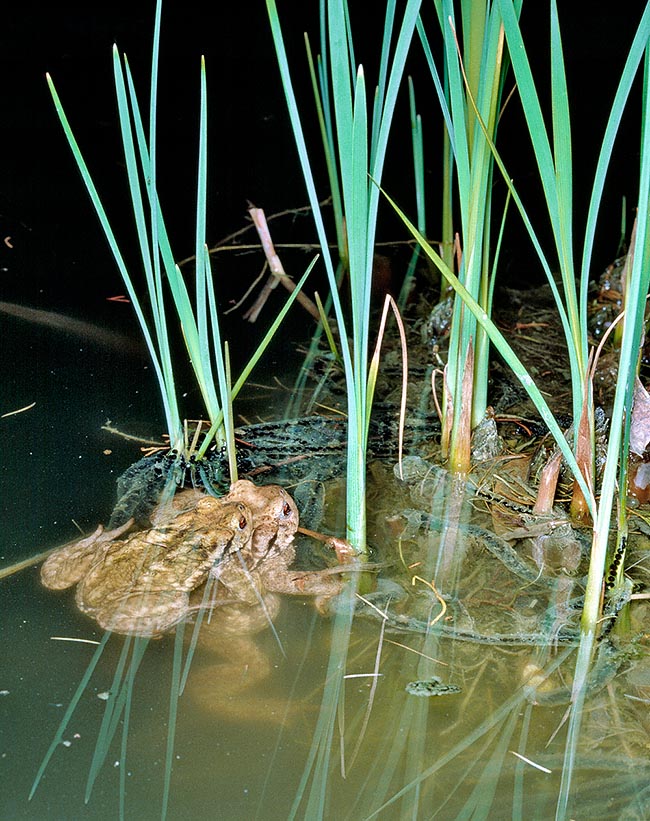 The sociality of their behaviour is clear in the case one of the tadpoles is wounded: it releases a chemical compound that informs all others about the danger and pushes them to flee to the bottom and disperse in all directions. This characteristic is not common in all the anurans.

The main predators of the tadpoles are the newts, aquatic invertebrates such as larvae of odonates and aquatic scorpions, and crustaceans such as the Prokambarus clarkii; it seems that they are not eaten by the fishes perhaps due to their unpleasant taste.

The reproductive period of the Common toad depends on the environmental temperature that must be of about 12 °C, and depending on the altitudes and latitudes it varies from March to June.

The communities utilize every year the same site for the deposition, called areas of frega: these are points of water little deep, temporary or permanent. This allows also the monitoring of the decline or of the extinction of populations in case there are no more births recorded in the site.

For reaching these sites are creates real migrations, that at times may cover even a thousand of metres. The walk sees hundreds of individuals participating every evening after the sunset in the rainy weathers and continues until when the temperature does not go down under the limit value of 5 °C.

During the migration the toads already start to mate. Seen the ratio clearly in favour of the males (7:1) in the populations, these dash and cling indiscriminately on whatever moving object and having the size of the females, hence also on other male fellows.

The male toads have the vocal sac almost atrophied and cannot emit cries suitable for attracting the females, so the formation of the couples happens simply through attempts and errors of the males that cling to them.

In the case a male succeeds in “taking” a female, and this one is not prepared for the mating, it reacts “coughing” without emitting any sound; in case it is ready it keeps quiet until when the male has not embraced it at the axillar level and goes on towards the area of frega carrying him on the back.

There is no copula as the fecundation is external: the female spawns several thousands of eggs and the male fecundates them while they are emitted. 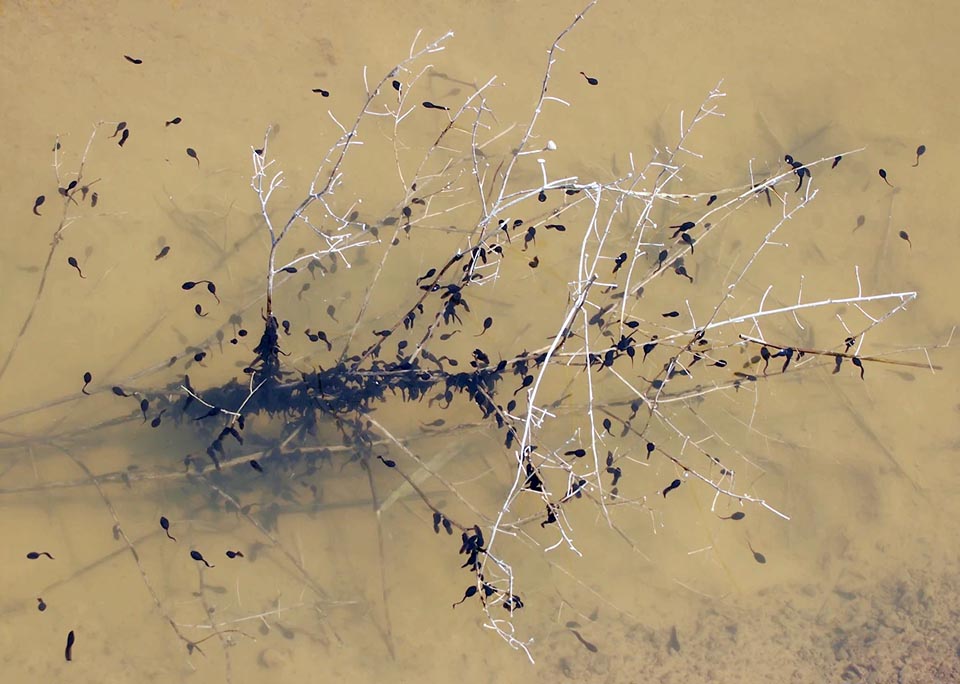 The tadpoles show a real social behaviour. They nourish of vegetable matter like algae, plants, plankton and organic residuals and when they must change grazing area, they move forming a compact group. If a larva gets wounded, it also releases a chemical compound that informs all others about the danger © Francesco Cervoni

The couple once arrived in the area of frega goes towards the deep of the body of water, and here will spend several days among the vegetation. The ovulation in the female is stimulated by the permanence in water and by the sunlight and begins usually after 6-14 days, Once the ovulation has begun the couple moves towards some projections from which then the female will be able to spawn and to hook the eggs, such as reeds, protruding branches or plants.

For laying the eggs the female elongates the hind limbs parallel backwards arching the back and lets them getting out in two gelatinous cords; this is also the position-signal for the male who begins to emit the sperm. The eggs do not get out all together but at about 20 cm the time. The operation lasts 5 to 10 hours and the male does not help the partner during the phase of deposition, in fact the process occurs also in its absence (obviously, the eggs will not be fecundated).

The eggs are enclosed in rows inside an about 2 m long gelatinous cord, left on the bottom or rolled up to plants and obstacles. 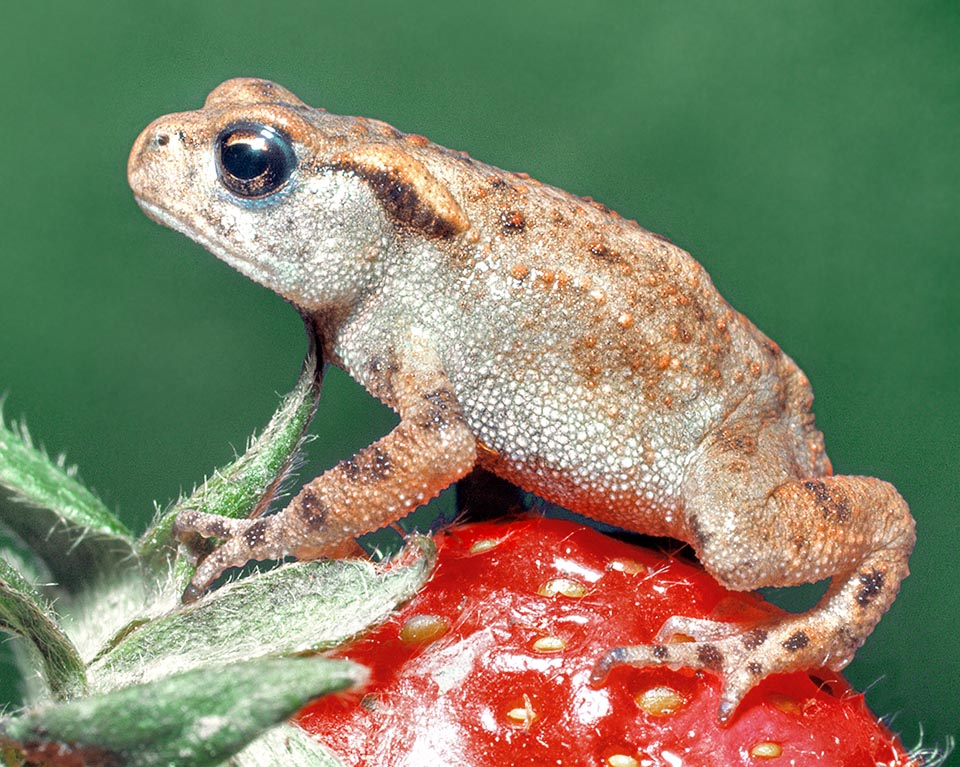 Young toad walking on a strawberry by the end of metamorphosis. 2-4 months from the birth have passed, depending on water temperature and available food © G. Mazza

The incubation lasts 5 days to 3 weeks depending on the temperature of the water, and the larvae (commonly called tadpoles) are dark with a grey-black colour. They present with short tail and a caudal membrane not extended on the back. Upon the birth they measure 3-5 mm and before the metamorphosis they reach the 40 mm.

Usually the tadpoles gather in groups around the borders of the water body, placing in the less deep zones, so that the exposition to the solar radiation is facilitated and the development is favoured. The development lasts depending on the food availability and to the temperature from the 2 up to the 4 months when the tadpoles perform the metamorphosis and get the look of the adults.

The young male toads become sexually mature around the third year of age, the females by the fourth. The average life expectancy for the Bufo bufo is of 12 years for the males and 9 for the females.