The Buxus balearica Lam. (1785) is native to the Mediterranean Basin, where is nowadays present, at risk of extinction, in Algeria, France (Corsica), Italy (Sardinia), Spain (Balearic Islands and south-eastern coasts), and Turkey; it grows both on sandy soils and on rocky slopes, even calcareous, up to 1300 m of altitude.

Shrub or small evergreen tree with a rather slow growth, compact, with the branches tending to be erect, which when young have a squared section, it reaches, in cultivation, a height of 2-4 m, whilst in the wild old specimens, when in the best conditions, can reach, and in some instances exceed, the 8 m; in the adult specimens the bark is grey, with reddish striatures. It has elliptic simple opposite leaves, coriaceous, with a rounded or sharp apex, 2-4,5 cm long and 1-2,5 cm broad, of a glossy dark green colour on the upper side, paler under. In spring, at the axil of the leaves, the inflorescences do appear. They are formed by glomeroles of unisexual flowers with triangular tepals, about 4 mm long, of a greenish-yellow colour; the female flower, usually solitary, has three about 3 mm long styles, and is surrounded by some male flowers with four, 4-6 mm long, stamina; the pollination is effected mainly by the bees. 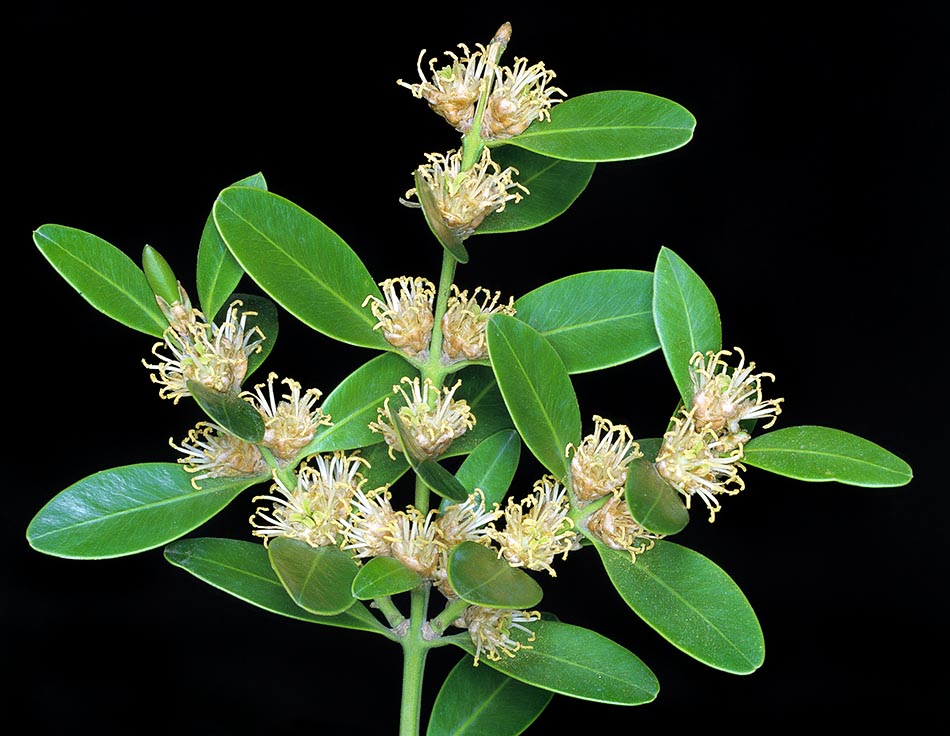 Native to Mediterranean basin, the Buxus balearica is a compact shrub that in nature may be 8 m tall. The inconspicuous flowers are pleasantly and intensely perfumed. It stands drastic prunings and is well fit in cultivation for creating border fences and for the vagaries of the topiary art. Toxic but medicinal virtues © Giuseppe Mazza

The fruit is a globose capsule, long even about 15 mm, dehiscent, which, when ripe, opens in three valves ending with curved styles; the fruit usually contains 1-2 oblong, of about 5×3 mm, seeds. It reproduces by seed as soon as ripe in cold greenhouse, where it takes 1-3 months for germinating, or by semi-woody cutting in summer.

Plant of great effect, particularly suitable, seen its origin, to Mediterranean type climates, absolutely not particular to the soil, as it can grow both in sandy and stony ones, acidic or alkaline, provided well draining, and to the exposition, as it adapts both to the full sun and to the partial shade. It can be utilized for its thick, dark and glossy foliage as isolated specimen, for border hedges or shaped edges, as it stands drastic pruning and for this reason is also suitable for realizing topiaries.

When in pot, in whatever sort of soil, provided perfectly draining, is to be watered with moderation, leaving the substratum to dry up for some days before giving water again. The flowers are little striking, but pleasantly and intensely perfumed, especially in the evening. Its yellowish-brown wood, very hard and with a very thin grain, easy to lathe, suitable for realizing fine wood-working of great quality, has been one of the causes of its intensive exploitation during the past centuries.

All the parts of the plant are toxic due to the huge contents of alkaloids, which can be even of about the 10% in weight in the leaves, some of which, recently studied, seem to hold potentialities in the treatment of some sicknesses.

→ To appreciate the biodiversity within the BUXACEAE family please click here.