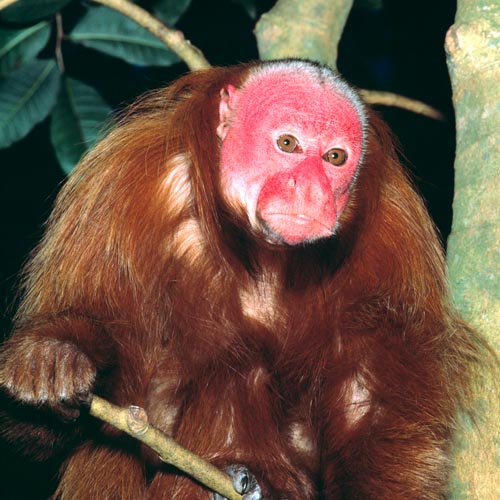 The genus Cacajao, includes New World monkeys of the parvorder of the Platyrrhines (Platyrrhini), afferent to the subclass of the Placentals (Placentalia), order (Primates), family Cebids (Cebidae).

Commonly known with the name of Red cacajao (Cacajao rubicundus Lesson, 1840), it’s a Platyrrhine Monkey of the family of the Pithecids that lives in the rainforest north to the Amazon River between western Brazil and Peru; some scholars do not recognize it the status of distinct species and consider it as a subspecies of the Bold uakari (Cacajao calvus Géoffroy, 1847).

Their diffusion is limited to the interior of the pluvial rainy forests; their home-range is quite restricted.

They have a diffusion limited to the inner pluvial forests of the Amazon River Basin, where they are predated by caimans, crocodiles, cheetahs, no to talk about the Indio, who call them Uakari. The Cacajao rubicundus, in particular, lives in a rather restricted forest region, included between two great tributaries of the Amazon River: the Rio Japurá and the Rio Negro. The bald uakari is located further south, in the same region. The black-headed uakari, extremely rare species, so much to be deemed independently from anthropogenic factors, in danger of extinction, because extremely fragile, lives further north, in the valley of the Rio Branco.

They are arboreal monkeys par excellence, and for this, they live always on the top layer of the forests of the superior Amazonia. In spite of the lack of prehensile tail, the Cacajao rubicundus is a very nimble monkey, capable to move among the upper branches at high speed. The diet is primarily vegetarian, based on various types of fruits as well as on bulbs and aerial parasite plants. It seems, however, that all three species of uakari nourish also of insects, larvae and small vertebrates (amphibians, reptilians, mice, bats, nestlings, etc.), this at least for what it was observed. 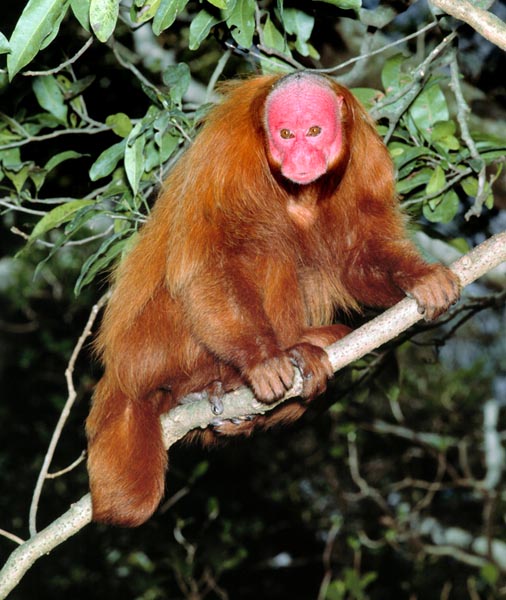 Lacks of prehensile tail, but at home in the higher forest branches © Giuseppe Mazza

The biologists in fact point out that the observation in the wild of these fascinating monkeys is very difficult due to their rarity and the poor accessibility of the locations where they do live.

In the red cacajao, the colour of the head and the bare face is hot pink, rather glossy. If the animal is excited due to the presence of a danger, the skin of the face may get scarlet tones, during the cries of the monkey.

Muzzle and good part of the head are bald, whilst the body is covered by a long hair (even if not too thick), of a nice reddish tint, at times almost orange.

The colour of the pelage in this species is more uniform all over the body than in the other two.

Among the three species of the genus Cacajao, the red cacajao is the most common, even if much more rare than other South American monkeys afferent to other genera. Among the Cebids which resemble to it, we find the genera Aotus, Chiropotes, Pithecia and Saimari.  But all these monkeys have prehensile tails, even longer than the body, whilst in the uakaris they are shorter and reach at most the 15-20 cm.  The uakaris, and therefore also the red cacajao, measure in all 50-70 cm, with a weight of 3-4 kg.

The males are bigger than the females. The coat is thick and long, and therefore they appear even more robust than what they are really.

The glabrous face has protruding skinny cheekbones, and rather deep-set eyes; and this is the reason why these monkeys appear rather spectral, or in any case “ugly” as per the common human beauty standards. The fingers of the hands and feet are long and thin, and have narrow nails, even if not sharpened with claws like the most primitive platyrrhines, for instance, the members of the family of the marmosets or (Callithricidae). For the biologists, matter of curiosity is the presence of skin convolutions on the fingertips, responsible of the well known “fingerprints”, which are absent in many other South American monkeys. 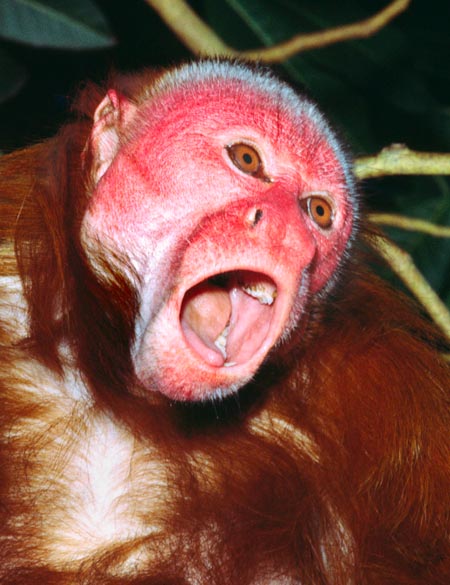 All species of uakaris are very much demanding when in captivity and a rich and varied diet is necessary. Their body, well adapted to the climatic conditions of the pluvial tropical forests, is on the contrary extremely delicate in different climates, even if fairly mild, where they quickly pass away, due to serious lung diseases, if the right temperature and an adequate humidity are not provided.

For such reasons, apart their rarity, it is not easy to find the Cacajao rubicundus, like the other two species, inside the zoological gardens; for the rest, as they have a mild character, calm and almost apathetic, they may however live in a zoo, with areas equipped for housing them. In the wild, they live up to 20-25 years, in captivity, provided aforementioned conditions are maintained, thus avoiding the depression of the animal, they may reach the 15 years of life.

The Cacajao rubicundus have a quite mild character, and in the wild this allows them to live in groups formed by 15-35 individuals, with a dominating male which reacts by biting with its rather long canines, when attacked or disturbed. The pairs are monogamous and stable. The polygyny has not been noted, even if they live in rather crowded groups.

The females deliver every two years, after a gestation of about 6 months, generating only one newborn per time, nursed till about the fourth month of life, and then is weaned by the mother who cares it. The females reach the sexual maturity when three years old, the males, among the sixth and seventh year.

For the IUCN, all three species of Cacajao are in danger, and the Dark-headed uakari (Cacajao melanocephalus) has already entered the red list of endangered species.