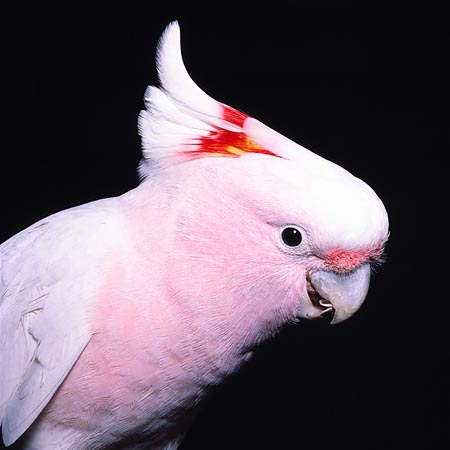 The Pink Cockatoo (Cacatua leadbeateri leadbeateri Gray, 1840) was discovered, studied and characterized by the English biologist ornithologist George Robert Gray in 1840 who, while coming back from one of his exploration trips in the deserts of central Australia, brought several specimens of it to the London British Museum and to the London Zoological Garden.  As amply indicated in the introductive fiche, the Cacatuidae form one of the three families of Psittaciformes. Even if they do not reach the size of the Aras, which in the case of the Anodorhynchus hyacinthinus abundantly exceed the metre, or the dimensions of the Kakapo (Strigops habroptilus), the non-flying parrot, they have in any case a remarkable size around the 40 cm. The smallest in the group, the Nymphicus hollandicus, known among the breeders under the name of Cockatiel, Quarrion or Weiro, exceeds in any case the 30 cm.  The habitat of the Cacatuidae extends from Oceania (Australia, New Zealand) to Indonesia, New Guinea and other islands of the Pacific Ocean. Of the 21 species present in the wild, 11 are endemic to Australia, 7 live in Indonesia, and the remainders in New Guinea and other islands of the South Pacific.

The Cacatua leadbeateri leadbeateri is located only in the desert territories of central Australia and on the Indonesian island of Sumba.

The zygodactyl structure of the foot, permits to the species to get along in the thick foliage of the trees, but also between the unfriendly succulents of the desert. In the island of Sumba, the chose the thick forests and altitudes not exceeding the 500 m above sea level. They can, for short distances, walk on the ground, even if their digitigrade status is not much developed due to the zygodactyly.

The Cacatua leadbeateri leadbeateri have an ipomelanic basal plumage, which can be white, with pink gradations on the wings and the back, whilst the head, chest and neck have a more intense pink colouration. Like the other species, both males and females have an erectile crest which is surprising, when fully open, with a showy yellow and red horizontal band. The eyes are surrounded by a ring of bare white skin, robust gray beak, with the upper portion mobile in comparison to the lower mandible and the skull, robust claws. They can be 36 cm long, with a weight of 350-500 grams and live up to 50 years. 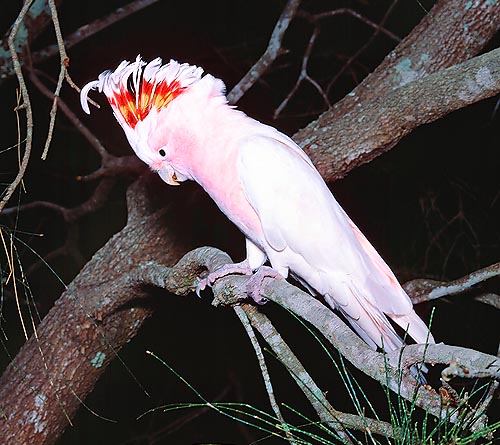 The Pink Cockatoo has a gaudy, erectile crest © Giuseppe Mazza

The sexual dimorphism is evident in the black iris of the male, whilst that of the female is reddish-brown, and the newborns, called pullets, have a dark brown iris.

Usually, the females clutch 3 to 5 eggs, and the sitting (or the incubation in artificial conditions) lasts 24-26 days.

The father, who nidifies in the hollows of the trees, takes care for all this time of the sustenance of the mate and later also of the pullets, which are waiting, ravenous, for the regurgitated food. They are weaned by the eighth week of life, autonomous, by then, in the flight and in the research of food.

The Cacatua leadbeateri leadbeateri are frugivorous, granivorous and insectivorous. As a matter of fact, they nourish of seeds of various kinds of plants, tubers, wild onions, berries, flowers and pollen, vegetables, buds, insects and larvae, especially of coleopterans and lepidoptera.

They live in noisy flocks, meeting, if possible, close to waterways where it is easier to find the aliments they eat. When in captivity, they need very spacious and robust aviaries, logs to be used as roosts and for the construction of the nest, which is done by the male. It is a rowdy species, very sociable, easy to train, object of experiments of ethophysiology because having remarkable phenomena of imitation of music and of the human voice.

The traffic is strictly controlled by CITES. The IUCN has inserted the Cacatua leadbeateri leadbeateri in the Red List of the Threatened Species.

→ For general information about the Psittaciformes please click here.

→ To appreciate the biodiversity within the PSITTACIFORMES please click here.