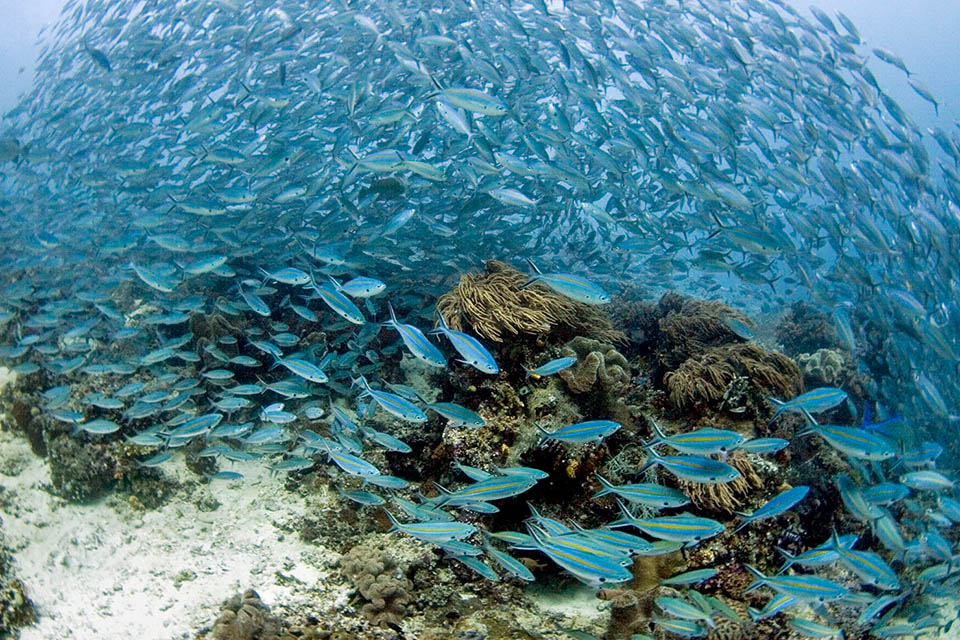 Dense school of Caesio caerulaurea. This species, present in almost all tropical Indo-Pacific, often swims mixed with other Caesionidae © Kozy and Dan Kitchens

The Fusiliers are fishes known for their long and lathed like a bullet body, and Caesio caerulaurea Lacepède 1801, vulgarly known as Blue and gold fusilier, is certainly no exception to the rule.

It belongs to the class of the Actinopterygii, the ray-finned fishes, to the order of the Perciformes, and to the family of the Caesionidae, group of fishes counting 4 genera and 23 species, at times present also in the brackish waters. Family characterized by tireless swimmers often moving in impressive schools. Fishes related to the Lutjanidae, but with a greatly smaller mouth as they nourish exclusively of zooplankton.

The generic name Caesio comes from the Latin term “caesius”, grey blue, the adjective the ancient Romans gave to the bright glitter of the light blue eyes or to the silver, whilst the specific term caerulaurea reminds us, again in Latin, that the livery of these fishes associates the colour of the sky with the yellow-gold. 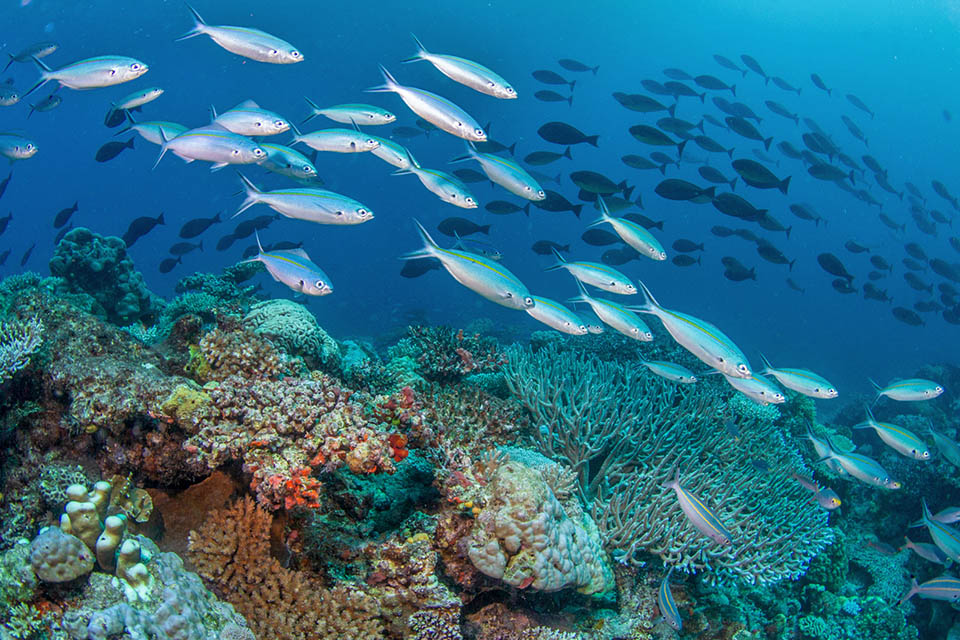 It swims mid-water eating zooplankton, especially copepods and cladocerans, plus eggs and larvae of the fishes and various reef inhabitants © Mark Rosenstein

Caesio caerulaurea has an extremely vast distribution in the tropical Indo-Pacific, but the Arabian Gulf, from the Red Sea to South Africa including Madagascar and the adjacent islands of the Comoros, Mayotte, Réunion, Mauritius and Seychelles. We then find it in the Chagos Islands, the Maldives, along the Indian and the Sri Lankan coasts. Eastwards, it is present everywhere: from Australia to Japan, reaching, south, New Caledonia and, east, the Fiji, Tonga, and Samoa islands.

The Blue and gold fusilier is a pelagic species swimming mid-water, not far from the madreporic formations, often in numerous schools between the 1 m and the 50 m of depth. 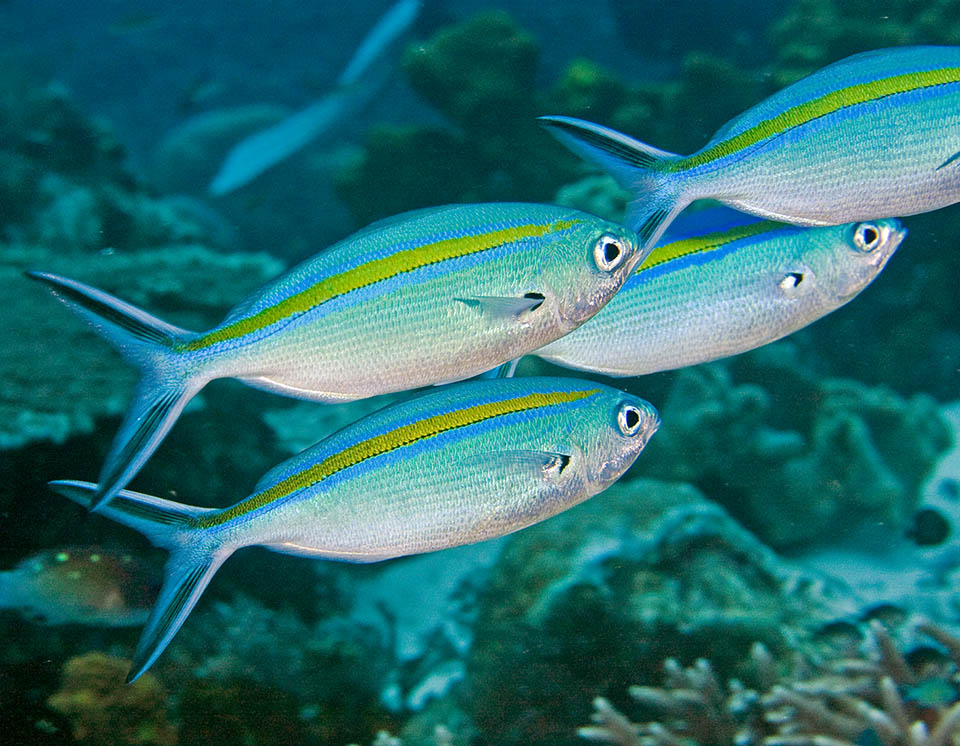 Commonly known as Blue and gold fusilier, it can reach the length of 35 cm, even if the catch is usually measuring 25 cm © Paddy Ryan

Frequent in the lagoons, it often concentrates, together with other Caesionidae, where the current is rich in zooplankton: copepods, cladocerans, and the eggs of the larvae of the fishes and of the various inhabitants of the reef.

Caesio caerulaurea can reach 35 cm of length, but the catch usually measures about 25 cm.

The mouth, small and oblique, is protrusible, that means it can project ahead to seize rapidly the food with its tiny conical teeth. 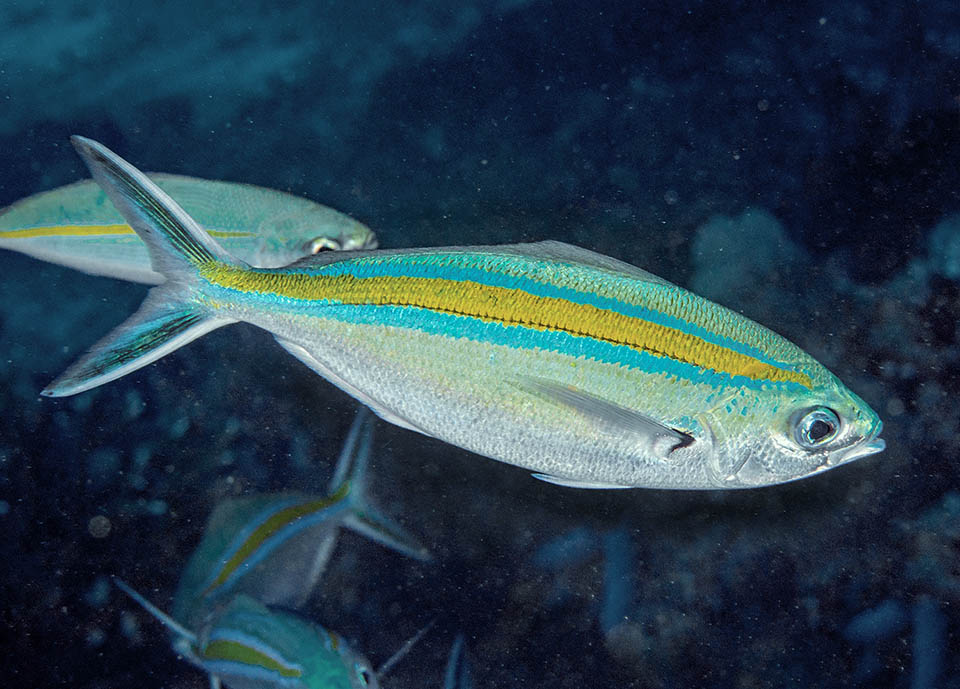 The Blue and gold fusilier back is bluish, thus, not to be seen by the predators looking from the top to the bottom, whilst the belly is clear to mix, seen from below, with the shining surface of the sea. Over the black lateral line, we note a golden band that reaches the caudal fin, emphasized, on both sides, by turquoise bands © Rickard Zerpe

In the Blue and gold fusilier, the dorsal line is bluish in order not to be sighted by the predators that look from top to the bottom whilst the abdomen is clear to mix up, if seen from the bottom, with the shining surface of the sea. And to better confuse the ideas to the stalkers, over the black lateral line runs a golden stripe emphasized on both sides by turquoise bands.

It distinguishes from the analogous Pterocaesio tessellata, smaller, that has a thinner and duller yellow band, and from Pterocaesio chrysozona, because of the black tips this species has at the apices of the caudal fin, whilst in Caesio caerulaurea the whole central part of the caudal bifurkation is black and draws a scissor.

The Blue and gold fusilier is a social fish that welcomes in its schools other species of fusiliers united by the search for food. 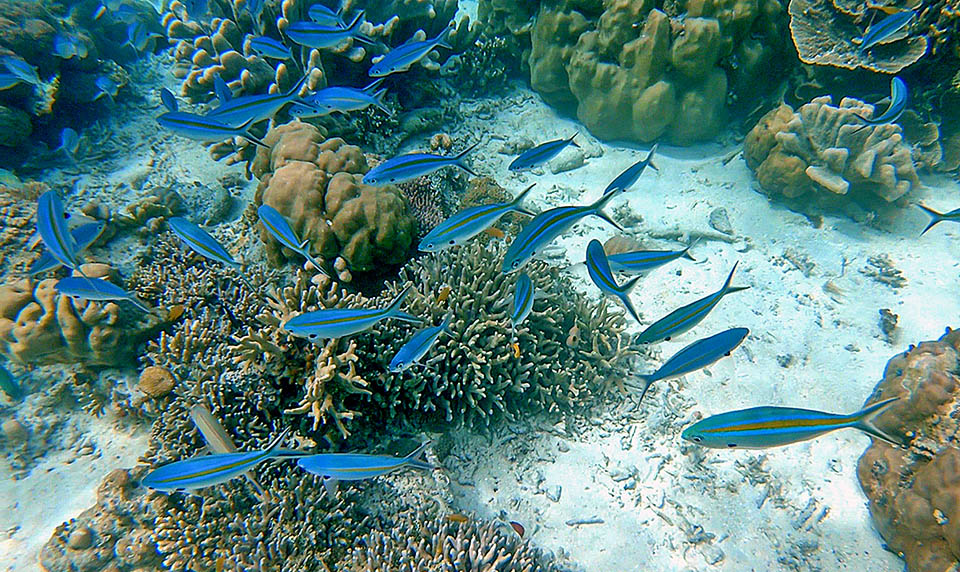 It distinguishes from similar Pterocaesio tessellata for the wider and showy yellow band, and from Pterocaesio chrysozona for the typical black scissor pattern of caudal fin © Adelma Hills

The reproduction should be a matter of couples, but various males take the opportunity to actively participate in the wedding.

In fact, when a female is ready to spawn, it releases in the water a peculiar smell with one hour, one and a half hour before.

The valiant pretenders get forward stimulating with nudges and pecks the egg-swollen abdomen of the female. This one must choose, usually, among 2-6 males and finally starts a spiral ascending dance with the chosen one to lay eggs several times, hairpin after hairpin, towards the surface, where the eggs are better dispersed by the currents.

The other pretenders leave do, rejoining the school, but follow with their eyes the couple and by any release, fast as lightnings, the place where the chosen has fecundated the eggs, to also add their gametes. A wedding gift certainly useful for the survival of the species, as confirmed by the huge diffusion of this fish. 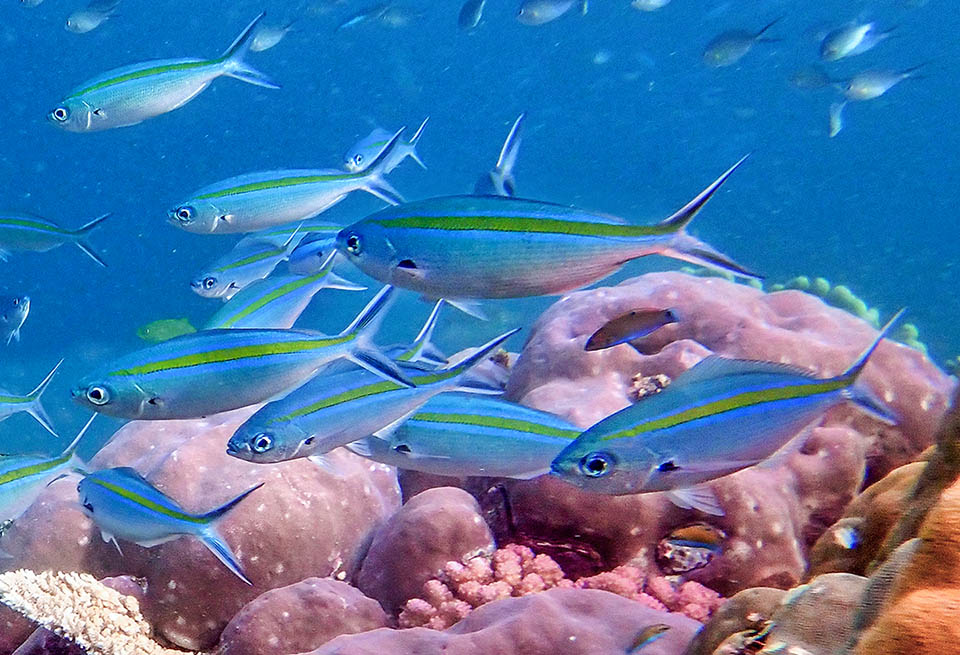 When a female is ready to spawn it frees in the water a special smell that attracts males. Then it ascends spirally with the chosen to the surface, repeatedly giving the eggs to the currents. They are at once fecundated by the partner, but the other pretenders, who follow the wedding furtively, release a few instants after also their own gametes © Bill Scholtz

Seen its marked mobility and size, Caesio caerulaurea is not threatened by the aquarist market but is sacrificed as bait for tunas and locally is much fished for the human feeding.

However, it is not an endangered animal, considering the vast range of diffusion and the good resilience with a possible doubling of the population in less than 15 months (2021). Therefore, the vulnerability index of the species is low, marking presently 26 on a scale of 100.