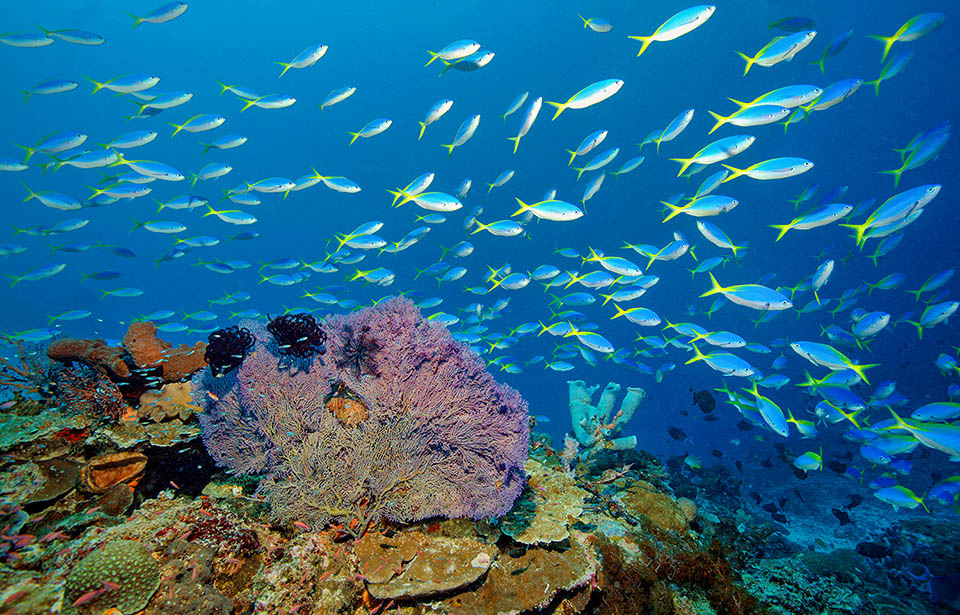 An impressive Caesio teres school, frequent in Indian and western Pacific oceans. Closely related to the Lutjanidae they however nourish only of zooplankton © Kurt Gross

Caesio teres Seale, 1906, belongs to the class of Actinopterygii, the ray-finned fishes, to the order of Perciformes and to the family of Caesionidae, that reserved to the “Fusilier fishes”, called in this way because of their long and pleasant to look at body shaped like a bullet, with 4 genera and about 23 species, at times present also in brackish waters.

They are pelagic animals living in schools, closely related to the Lutjanidae, but with greatly smaller mouths, seen that they nourish exclusively of plankton.

The generic name Caesio comes from the Latin term “caesius”, bluish-grey, the adjective Romans used due to the luminous colour of their eyes and of the silver, whilst the specific term teres comes, always in Latin, from “tero”, to rub, with reference to the sparkling livery of these fishes that seem to appear as almost polished. 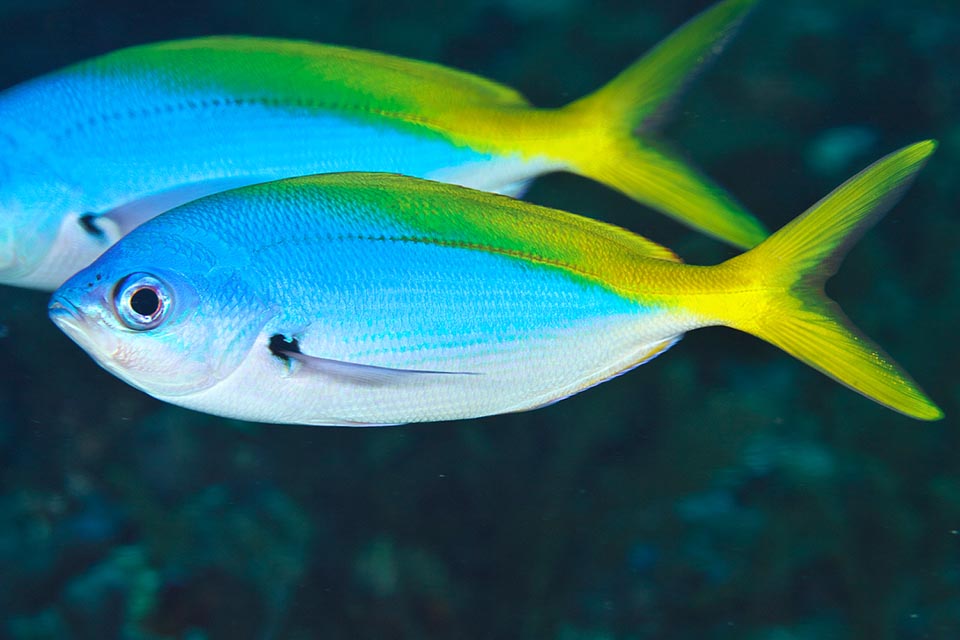 The sparkling livery seems to be divided in two by an oblique line. The upper part is yellow, whilst the lower is light blue in an elegant contrast © Keoki Stender

Caesio teres is frequent in the Indian Ocean and in western Pacific. Absent in the Red Sea and in the Persian Gulf, we find it, indicatively, along the African coast from Somalia to South Africa, in Madagascar and adjacent islands, Réunion, Mauritius, Seychelles, Chagos Islands, Maldives, Sri Lanka, India, Bangladesh, Myanmar, Thailand, Cambodia, Malaysia, Indonesia, Australia and Papua New Guinea. Northwards, after the Philippines and Vietnam, it reaches Taiwan, China and Japan; southwards, the Coral Sea and New Caledonia, has finally colonized, eastwards, the Fiji, Tonga, Samoa and Kiribati islands.

It is a pelagic species, linked to the reefs, that swims in numerous schools in mid-water, between the 5 and the 50 m of depth. 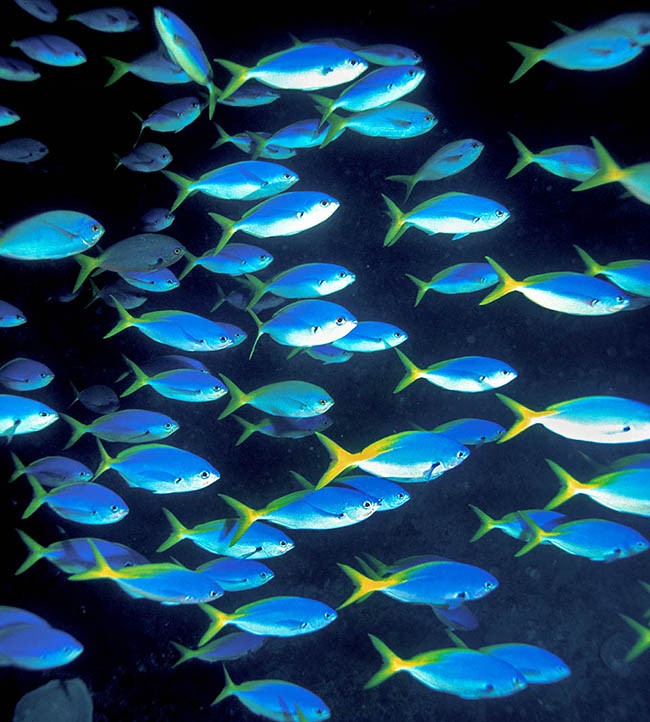 Mixed school of Caesio teres and Caesio cuning. Converging hungry in the same sites rich of zooplankton, it is not rare that in the general mess some lose for a moment their group and join inadvertently the other © Keoki Stender

Frequent in the lagoons, it is often found along the entry and exit ways of the tide, where the current carries rivers of zooplankton organisms of various kinds, such as copepods, cladocerans, and countless eggs of fishes, echinoderms, sponges, cnidarians, bryozoans, mollusks, annelids, and of other benthic animals forming, larvae included, its own diet.

The spindle-shaped body can reach 40 cm in length, but, usually, the catch measures about 26 cm.

The small and protruding mouth, with conical and tiny teeth present on the jaws and the palate, is oblique and protrusible, which means that it can cast ahead to quickly seize the food.

The pelvic fins have one spiny ray and 5 unarmed; the pectoral one has 18-23 soft rays and the caudal is bifurcated, as is usually the case in the fishes ceaselessly swimming.

It is the typical look of the species, even if later, with the growth, the yellow area often reduces to the peduncle and to the caudal fin. This detail distinguishes at first glance Caesio teres from the analogous Caesio xanthonota, where the yellow zone, unchanged with age, occupies all upper part of the body, from the head to the tail, fins included. Conversely, Caesio cuning, at times mixed in the schools of Caesio teres, has, since young, only the tail yellow.

As often occurs in the fishes world, the abdomen of all these species is clear, in order to merge with the rippled surface of the sea when a predator looks at the school from the bottom up.

Finally, in the populations of Caesio teres of western Pacific, the yellow is less extended towards the head, and a characteristic little spot can be observed at the base of the pectoral fins. 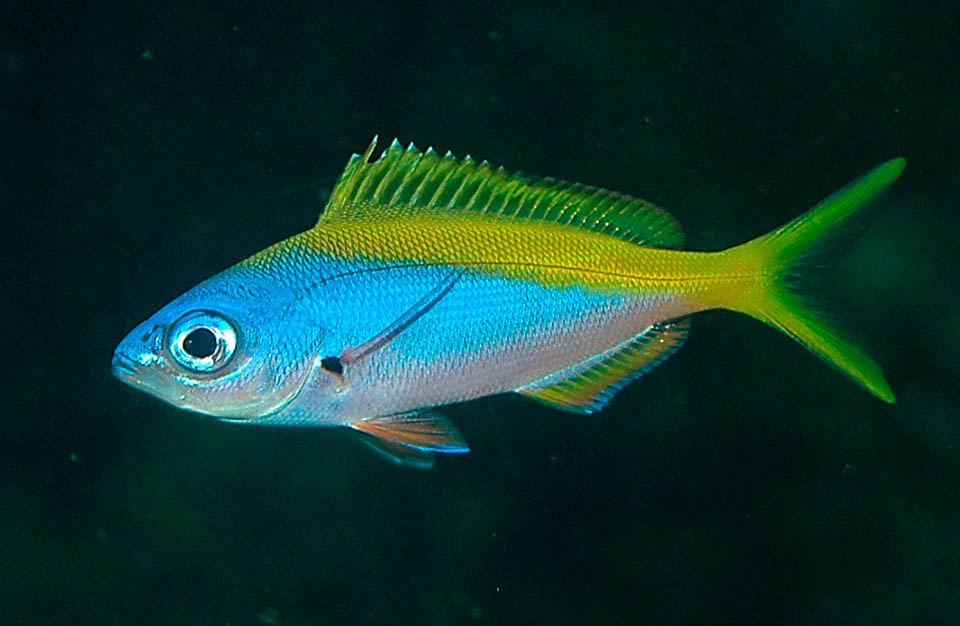 A young. At this stage, the oblique diagonal separating the two colours is very clear © Benoit Lallement

Caesio teres often go swimming in schools mixed with other Caesionidae, that, converging to the same sites rich in zooplankton, taken by the general frenzy of the meal, lose their group. The couplings usually take place shortly after sunset, with full moon and ebb tide, in the channels where the water drains from the coral reefs and the fecundated eggs, floating thanks to a droplet of oil, are carried offshore by the currents.

Seen its remarkable mobility, Caesio teres is not an aquarium fish by sure, unless to have available, besides a suitable feeding, the large cylindrical pools of some public aquaria, where these fishes can swim around and around ceaselessly.

Locally important for human feeding, it is also used as a bait for tuna fishing. The resilience is good, with possible doubling of the population in less than  months (2020). As a consequence, the vulnerability index is moderate and nowadays marks 28 on a scale of 100.