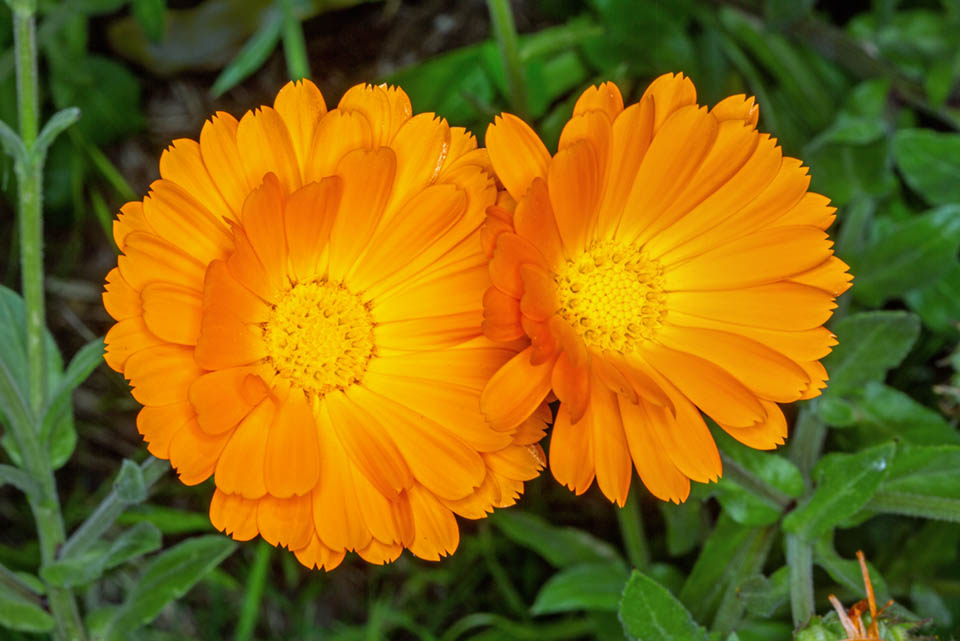 With its orange capitulum, almost shining, Calendula officinalis was once called “Solis sponsa”, that means “Bride of the sun” © Giuseppe Mazza

Calendula officinalis, described by Linnaeus in Species Plantarum: 2: 921 (1753), is diffused in western Europe as well as in other continents and is indicated, by some, as a species endemic to the Spanish flora.

In Spain it has taken over the popular names of botón de oro, caléndula, flor de muerto, maravilla, rosa 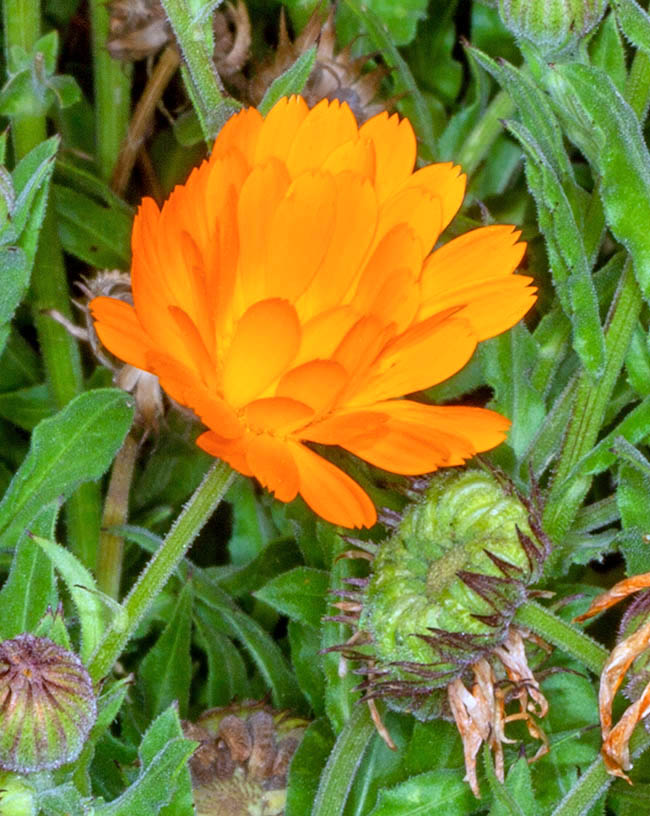 The achenes of Calendula officinalis have two forms: the outer winged and spiny on the back, the inner annular curved. In the photo are clearly identifiable also the dark coloured bracts that surround the capitulum © Mazza

Historical denominations of this flower are terms going from the supposed Greek klýmenos and Latin caltha, to the medieval solsequium of the Abbey of St. Gall and calendula of the Schola Medica Salernitana, name finally chosen by Linnaeus.

Its generic name originates from calendae [-arum, f.] = the first day of the month as should result from the explanation of the Circa Instans of the XV century. «dicitur calendula quia omni mense gerit florem»and

Caltha officinalis (L.) Moench, synonym of this species, reminds with Caltha the basket shape of the capitulum (or catalide) and with officinalis the utilization of the plant.

The epithets solsequium, ‘bride of the sun’ and ‘peasants’ watch’, are then the consequence of the repetitive photonasty of the capitulum (the opening in the morning and closing at the sunset and the relevant orientation towards the solar disk).

Almost antithetical values have been attributed to the pot marigold: in fact it is considered a symbol of obedience and of constancy, but, perhaps, also because it alludes to the alternation between the life and the sleep and death, it is also a flower dedicated to the dead and the Greek mythology, through the myth of Adonis, has burdened the image of this flower with the negative connotation of displeasure.

For Mexicans it is a symbol of death and for the British is that of jealousy.

The combination marigold and cypress ‘blows the bank’ expressing the despair.

At the end, it is not astonishing that in floriography to such a pleasant flower, also due to its long period of blooming and its employments, can be associated multiple emblematic values such as, for instance, to be related to symbol of the glorious and millennial Schola Medica Salernitana.

Also the positive symbolic values of this flower are traditionally strong and shared, therefore it has been utilized as an attribute of the Virgin Mary, of the severe monks and of a just and magnanimous prince. 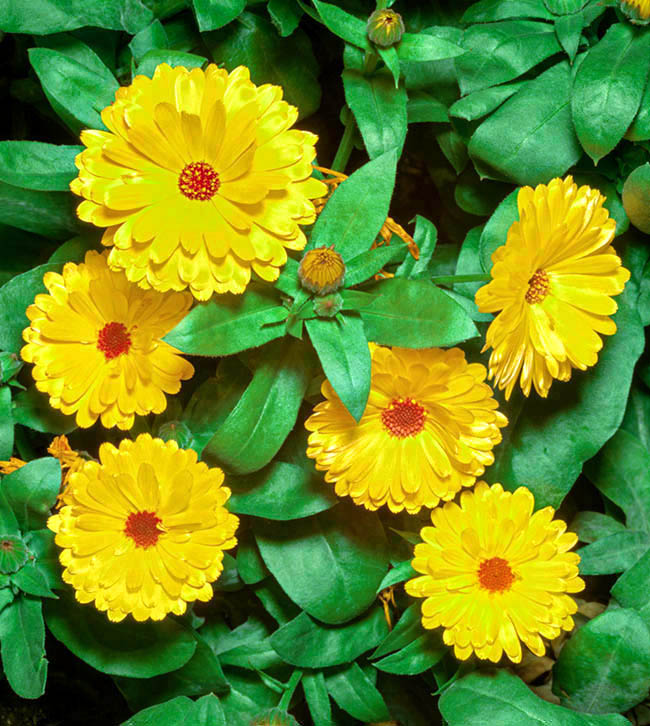 In order to illustrate the characteristics of a sovereign, it is, in fact, standing, together with the White rose (symbol of the York dynasty) and the Red rose (emblem of the Lancaster), in William Scrots painting Edward VI,1550 ca.

The young monarch, legitimate heir and direct descendant of the two families, was an orphan of mother (Jane Seymour) and of a father (Henry VIII) who was taking in high consideration the healing properties of the pot marigold.

The phytotherapic use of the pot marigold is historicized through the centuries, as well as by the Schola Salernitana and by Albertus Magnus also by Hildegard von Bingen, Benedictine abbess of Rupertsberg and Doctor of the Church.

In her work Physica, one of the most important works of the twelfth century about medicinal plants, the ringula (pot marigold) is classified following the humoral theory as ‘cold and humid’ and together with the plant are indicated preparations useful for men and cattle.

Calendula officinalis is used in phytotherapy and is sold in pharmacies and herbalists, in compliance with legal regulations, in form of herbal teas and of preparations based on extracts such as oils, drops, creams and ointments having moisturizing, soothing, anti-inflammatory and emollient action.

Like other phytotherapic plants, it is, according to specific disciplinaries, cultivated in the field by farms of various countries.

The Calendula officinalis is also an alimurgic plant (from Latin alimenta + urgentia) because it can be used (if has not been subjected to pesticide treatments) as food in case of need or after local traditions: the tender leaves in soups and salads, the young capitula pickled and the ‘petals’ (semi flosculous) for colouring risottos, butter and cheeses.

Usually, the pot marigold does not cause allergies. 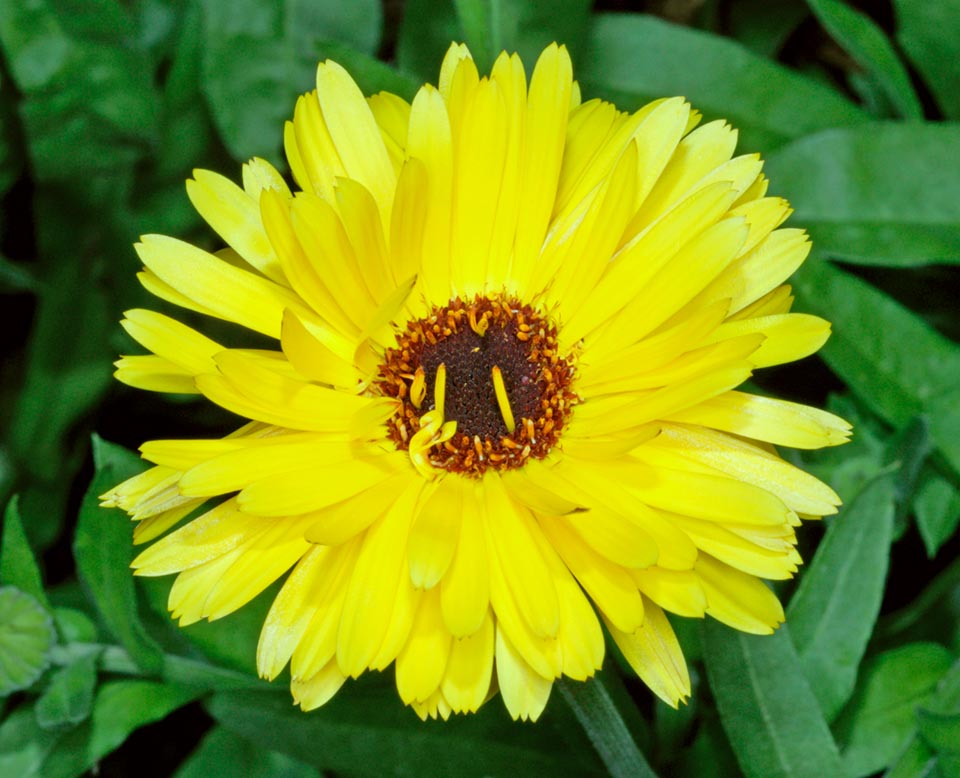 Annual or biennial herbaceous plant, it presents in tufts of more or less coarse-glandular leaves having an unpleasant odour and erect posture (40-60 cm tall).

It is heliophilous and very rustic and is found, even run wild, outside the gardens and the fields.

The leaves, covered by down, are alternate, about 15 cm long and 4-5 cm broad of a nice bladder green colour: the lowest ones are short petiolate and spatulate, the upper ones are oblong lanceolate. 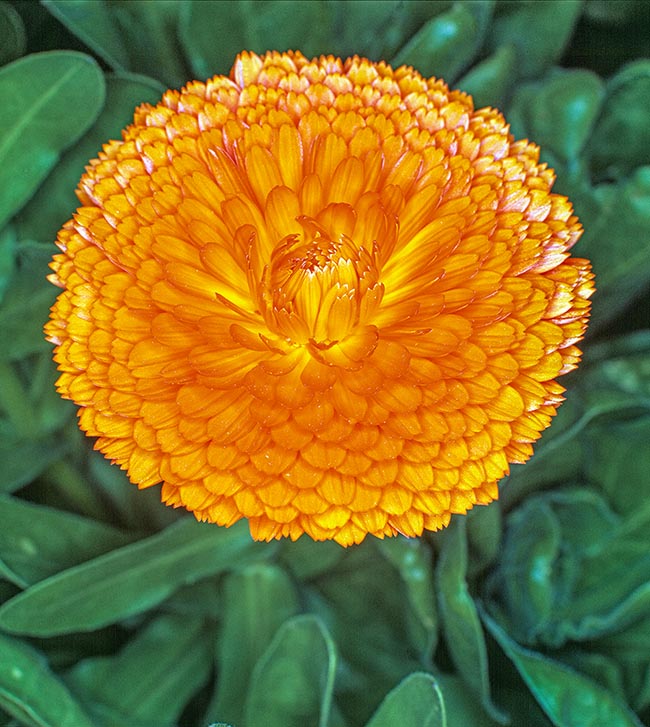 Many cultivars present the edges of the ligula marked by a colour more intense than the rest of the flower fading to light and to bright downward. In these taxa we can appreciate some even contrasting colours © Giuseppe Mazza

The orange coloured capitula, surrounded by bracts, of a diametre of 2-5 cm, long pedunculated, are carried single; the bracts may be hairy as well as coarse.

The central flowers on the disk, or florets, are hermaphrodite (regular tubulous corolla), whilst the peripheral ones, or semi-flosculous, are female and have an irregular ligulate corolla with the toothed ligula at the apex.

The achenes are polymorphic and rugose: the external ones are winged and curved, the inner ones are short and strongly curved.

Blooming begins in spring (even from January), reaches the peak in June and extends until November; the seeds ripen from May ensuring the spontaneous propagation.

It is said that when the pot marigold does not open in the morning the day will be rainy.

Already in the second half of the nineteenth century, the cultivars of Calendula officinalis,, albeit considered ‘un peu grossières’ plants, were recommended for the decorations of the platbands being rustic and having a nice effect with their white, yellow and nankeen colour double flowers.

Nowadays, in the gardens, these plants, appreciated for the more or less intense colour of the flowers, the size and the duration of flowering besides the ease of success, are utilized for borders and as first or second row herbaceous in the mixer borders.

Calendula officinalis and its horticultural cultivars are grown spaced 30 cm in open land, in cages and in pots, on moderately fertile drained soils, and are to be regularly watered during the periods of dryness.

It is possible to find seedlings raised in containers to be transferred or in small packages of certified seeds. Industrially, besides the decorative plants, are grown also those for the cut flower market.

Some cultivars may need fertilizers in order to increase the blooming and phytochemical treatments against aphids and powdery mildew and consequently it is good to remember that the florists’ plants are not produced for alimentary use. 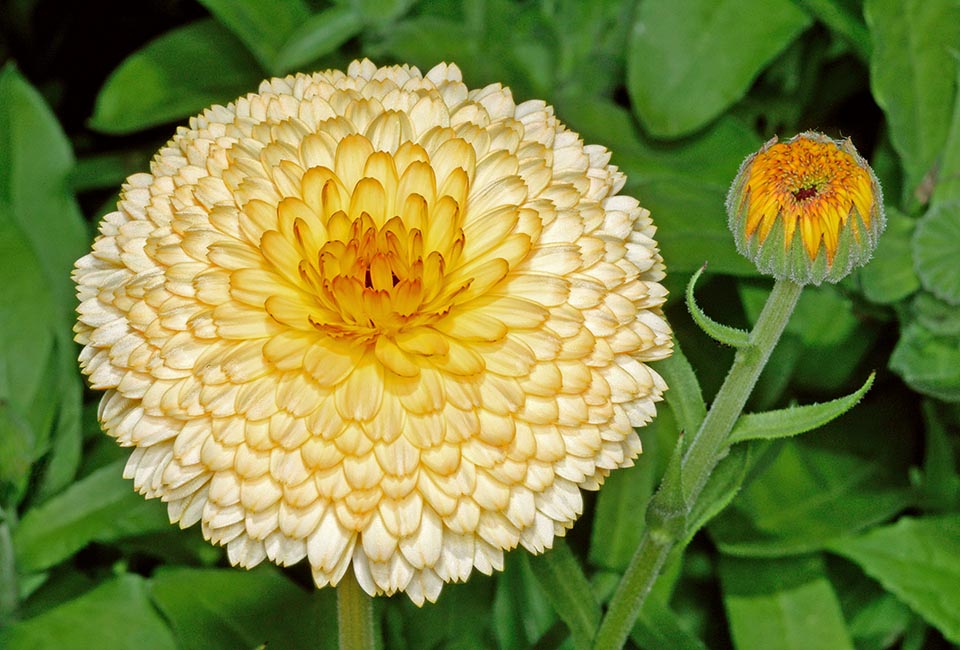 The clear colour and the pom-pom look of the hemispheric capitulum are very appreciated in Calendula officinalis horticultural varieties. Also, as we can note from the image, before their full development in these cases the central ligulate flowers are more intensely and differently coloured than the outer ones © Giuseppe Mazza

Among the horticultural cultivars we mention:

Calendula officinalis ‘Indian Prince’ that tolerates a partial shading and widens into a nice tuft (diametre 45 cm, height 60-75 cm). It presents showy dark orange capitula with various central flowers and the apices of the ligulae touched up in reddish brown. It blooms from early May up to late October. Excellent for borders, if cultivated specifically for cut flowers, needs disbudding. It can be grown on heavy/clayey soil as well as on light/sandy soil, with southern and western exposure. It does not appear to be a toxic plant and attracts bees and other pollinators.

Calendula officinalis ‘Snow Princess’ forming a thick tuft with oblanceolate or lanceolate intense green leaves, aromatic and slightly sticky. The capitula have several orders of white ligulate flowers or white cream with a touch of lemon yellow colour on the upper surface and butter yellow on the reverse; the inner flowers are of orange or brown, even dark, colour. The capitula (7,5 cm of diametre) are suitable for cutting and the flowers are considered edible (if not treated with pesticides). 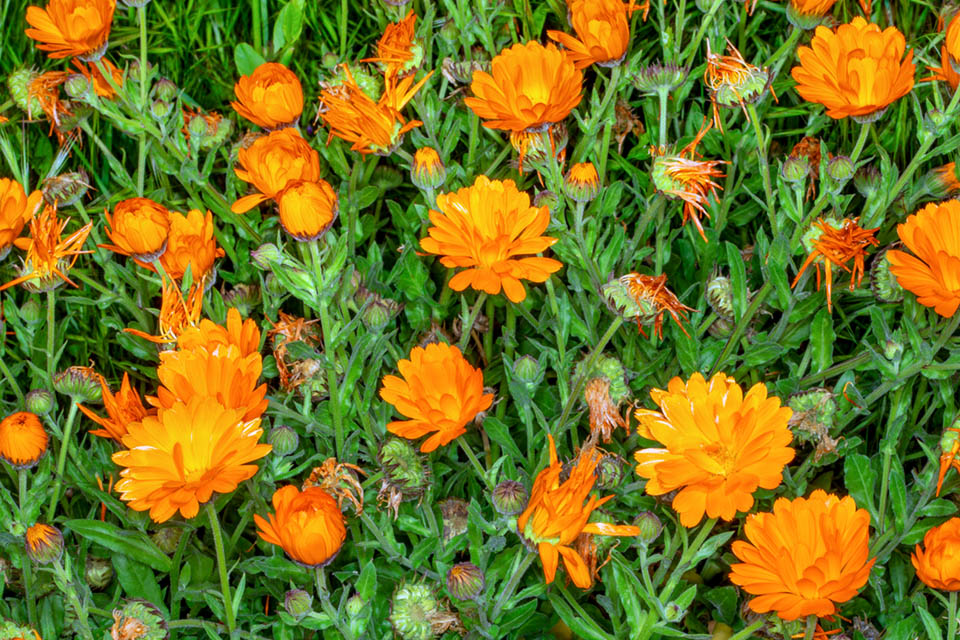 Calendula officinalis ‘Pink Surprise’, blooming from May to September, is annual, rustic, prefers well drained soils. It is about 60 cm tall. The ligulate flowers, arranged in more orders, are delicately curved and are of pale tonality, going from yellow to salmon pink and to golden orange; the tubular flowers are of caramel orange or brown colour. It is recommended for cultivation in pots, for the small flower beds of the patios and for getting cut flowers.

Calendula officinalis was last modified: May 28th, 2022 by Giuseppe Mazza