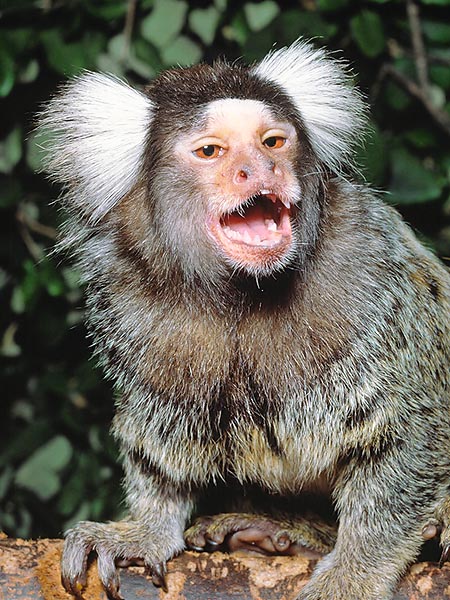 This family subdivides in four fundamental genera, at least until now thus establishes the International Commission of the Zoological Nomenclature (ICZN), but, like for many other families of animals belonging to various orders and classes, and in particular among the primates, the taxonomy is always under reshaping process.

The members of this order do not have a very vast bio-geographic distribution, seen that they are localized in the belt of tropical pluvial forests which goes, more or less, from Costa Rica to Paraguay.

The genus Callithrix has monkeys called uistitì, and to it belongs the most common small monkey of the family, called White ear tufts Uistitì (Callithrix jacchus Linnaeus, 1758).

The white ear tufts uistitì was, originally, diffused in all Brazil, from Mato Grosso to Amazonia, is nowadays confined in the Atlantic Forest Reserves, or more simply, Atlantic Forest, a group of nine forestall areas, UNESCO patrimony, present in the south-eastern part of Brazil.

These monkeys have an excellent arboreal adaptation and live in the thick of the forest, but can also go down to the underlying layer of the jungle and live also in urbanized areas, for instance, in parks and city gardens as well as in cultivated areas.

The general morphological lines of the callithricids tell us that, the nails, apart that of the big toe, if compared to those of the cebids, are not flattened, but shaped like a hook. Furthermore, unlike many cebids, which are mainly “brachiators”, with the fore arms longer than the back ones in order to be balanced on the branches (specialization reaching its best value in the Old World gibbons and in the spider monkeys of the New World genus, the Ateles, the callithricids have the extremities with inversely reported length. The hind limbs are in fact longer than the fore ones and allow these small monkeys to do long aerial leaps from branch to branch. 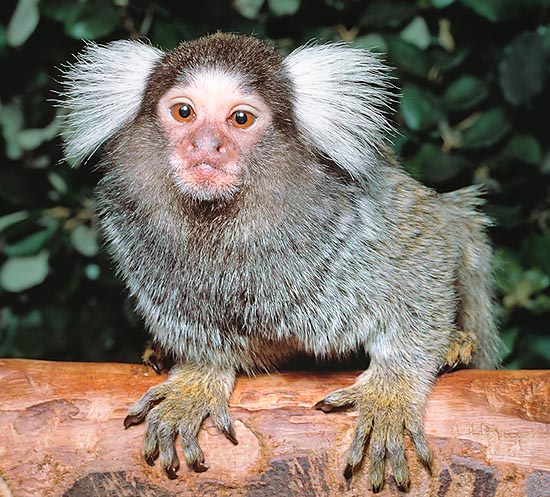 In the morning, they get out from sleeping dens dug in the trees hosting even 20 units © Mazza

The tail, very long, has no prehensile property at all, contrary to the cebids, and is utilized as a steering device during their acrobatic leaps. Generally, the callithricids are endowed of a thick and soft fur. They are monkeys equipped with fluffy tufts and with manes around the head.

In the specific, in the Callithrix jacchus the fur looks as grizzled, due to the mix of hairs of various colours, whilst the tail, longer than the body, is darker and is ringed by a score of white haired circles, which render this callithricid absolutely unmistakable. Finally, around the auricular region, there are two huge rigid tufts of white hair. Also the front is covered by a whitish down.

These primates, in both sexes, measure about forty centimetres of length, of which, anyway, more than a half belong to the tail. They weigh 350-400 g. These are animals very greedy of fruits and tender small leaves, of flowers and of small arthropods. Furthermore, seen the great docility of their temper, they well adapt in captivity, and so it is quite easy to find them in the zoological gardens.

The callithricids, or hapallids, and therefore also the Callitrhix jacchus, stand between the first creatures of the thick South American forest to become active as soon as the shadows of the night begin to disappear. These loud small monkeys begin then their daily activity made of agile jumps and of screams, getting out from the hollows of the trunks where they rest in groups (up to 15-20 units), somewhat like our squirrels of analogous size. They are considered as to stand among the most graceful and delicate of all primates.

The females of this species, as well as the females of the other species ascribed to this family, have multiple deliveries, giving birth to 2-3 infants at the time. The gestation lasts about five months. Usually, when a group forms, the dominant individual is a female which controls several males, mothers and sons. And inside these groups the males occupy their own hierarchical position.

They may define territories of 2,2-6,6 ha, but there are no territory defence forms, as on the contrary is the case for the African baboons. A demarcation with odorous traces, however, has been noted. Often, overlaps of territory may be observed, as well as also uistitì of different species, busy in eating on a common tree, without the formation of any struggle phenomena. For the time being, the IUCN does not deem them as endangered.