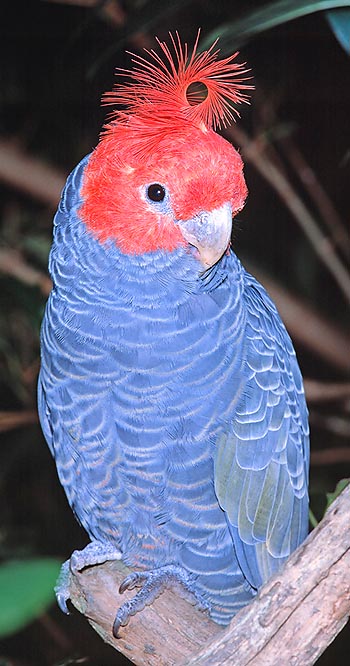 The Gang gang Cockatoo or, for short, the Gang gang (Callocephalon fimbriatum), is a bird belonging to the order of Psittaciformes and family Cacatuidae.

It was discovered by the French biologist René-Primevère Lesson in 1837, during his voyages in Australia. The Callocephalon fimbriatum is the only extant species of the genus Callocephalon. The Gang gang cockatoo is very much similar, for what the morphology end the behaviour is concerned, to the black cockatoos, but, as we shall see, its size is much smaller.

In the wild, they are endemic to Australia, and it is very rare to see them in captivity outside from the Australian continent, as the CITES restricts its trade and commerce very much.

They are present in various regions of the eastern belt of Australia: in particular in the New South Wales (from the woods of the central areas of this region, up to the coasts) and, going south, in the north-eastern part of Victoria, up to Seymour, rural centre of the Goulburn River.

Records and registrations have occurred also in the eastern part of Melbourne, in the Mornington peninsula and south of Gippsland. Small populations have been observed also in the western half of Victoria and of the Otway region, up to the southern limit of Australia.

During the mid-sixties of the last century, the biologists saw small natural groups on the King Island, but these ones are nowadays to be considered as extinct. On the contrary, those found nowadays in the Kangaroo Island, have been introduced, and so they are not wild autochthonous populations.

The biologists have noted that the populations of Callocephalon fimbriatum are subject to altitudinal seasonal migrations, in fact, during the winter, they move from the mountain forests, or at least the hill ones, for going down towards those downstream and vice-versa in summer.

On the contrary, during the winter they look more (obviously we talk of austral winters and summers, opposite to those of the boreal hemisphere) for drier wood areas, therefore downstream woods, or along the rivers or the coasts, or eucalyptus woods, as well as plants of the Australian Mediterranean thicket; but it is not rare to see them, during this season, also along the avenues, in the city public gardens and in the farms, where they do often nourish of the cultivated cereals. They always need the trees, as they build up their nests in the hollows of the trunks. 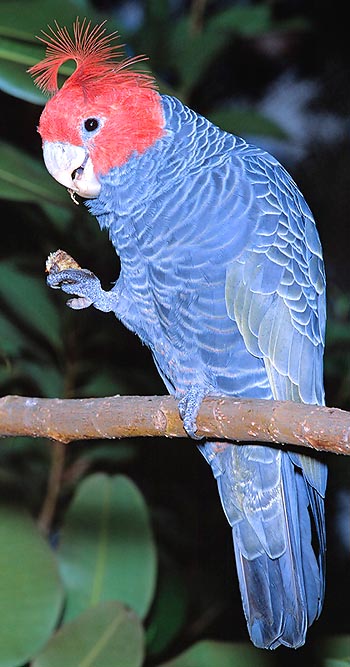 In the wild, they peck for the whole day © Giuseppe Mazza

As briefly stated at the beginning, the Gang gang cockatoo (Callocephalon fimbriatum) is similar to the black cockatoos for what the basic morphology is concerned, even if the colours of the plumage as well as the size are different.

Whilst in the black cockatoos the average size may reach the 50 cm, and the plumage may be dark and black, in the gang gang cockatoo the specimens of both sexes have lengths which do not exceed the 35 cm and a weight of about 257-260 g, with an average lifespan of 30-35 years.

The livery is characterized by an unmistakable plumage, mostly grey, where the various feathers, primary and secondary coverts, remigial and quill of the tail have edges with a paler shade; in both sexes, this shade of the feathers in the upper part of the body (that closer to the head), and of the wings, where, mainly in the females, there may be present also yellow colourations, creates the classical crossed texture, typical of the Callocephalon fimbriatum.

In the adults of both sexes, besides this homology in the plumage, there are also differences of stable chromatic sexual dimorphism. The adult males have a pronounced crimson (at voluntary mobility) frayed crest, covering the head, crimson too, as well as the cheeks and the face like a mask, very wide wings (compared to the body size), and a short tail. The adult females have head, face and crest with voluntary mobility, of grey colour, with the feathers of the lower part spotted of pink or pale yellow. The pullets, upon birth, resemble in the colouration of the temporary down to the mother, then changing at the time when the final plumage forms if they are males, and therefore it is possible to determine their sex.

In the gang gang, the foot is zygodactyl, in order to carry an arboreal life. The beak is hooked and curved, in the upper part, but smaller than that of other species of cockatoos; in any case it’s strong and of grey colour.

In the wild, their alimentary ecology consists, depending on the biotope where they are located, in seeds of trees and of native and wild shrubs, with preference for the eucalypti, the acacias and in some cases, the hawthorn, even if this plant is not spontaneous, but has been introduced in Australia. They are also greedy of fruits, berries, fruits of the forest and coleopterans larvae.

Usually, they eat on the trees, but come to the soil for drinking in pools, or nourish of fallen ripe fruits, or even of pine needles; in this last instance, the biologists define their nutrition as “anthophilous”; basically, they are therefore granivorous, frugivorous and anthophilous; the nutrition with larvae of coleopterans is not sufficient for classifying them as insectivorous. When in captivity, being much nervous animals, easily subject to stress, to the point of pulling the feathers, it is good practice to furnish freshly cut branches, and if possible, cones of conifers, so that they may give vent to their energy. 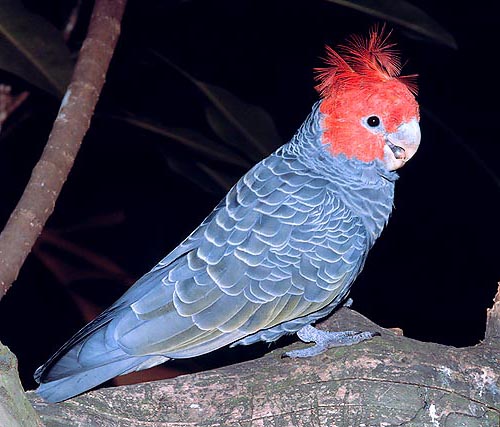 The artificial diet includes mainly, and in great quantity, small seeds, in order to keep them much busy, as it happens in the wild. It is good, therefore, to avoid the sunflower seeds, and to give them, even if this may seem rather odd, chicken bones, without flesh, and drupe shaped berries, in order they can vent their beak.

The Callocephalon fimbriatum form monogamous and closed pairs. The female find the hollow in the most suitable tree, where the nest will be created, to which construction both sexes take part. The nest is formed by wood chips, twigs and wood dust, which they obtain by chewing and scratching the trunk of the hollow with their robust beak. Usually, the female lays two eggs, which will be incubated by the mother as well as the father, for about 25 days. The pullets remain in the nest for 6-7 weeks only, and in this period both parents feed them by regurgitation. It is not rare, especially in summer, to see the whole family while eating. In some cases, we may even see pairs building the nests in very close hollows, so that the progeny may equally be nourished by the biologic parents and by the adoptive ones. The IUCN monitors their demographic density, and the same is done by the Birdlife Association.