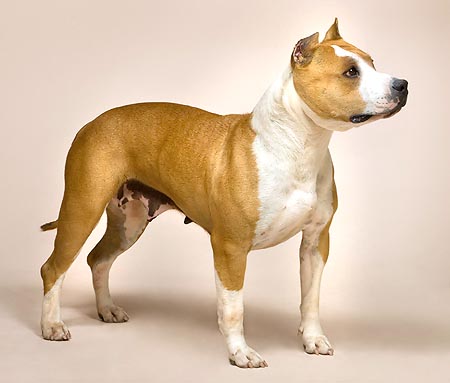 Essential in its forms, sporting, with short and clean mantle © Giuseppe Mazza

The history of the American Staffordshire Terrier begins in the USA and in Canada around 1880. This dog comes from a race now extinct: the Blue Paul Terrier.

At the beginning, this race was selected for the dog fighting, only at a later stage the aesthetic sides were cared, evolution, this one, which did not touch the selection of the Pitt Bull which continued to be employed solely as fighting dog.

In 1884, with the purpose to protect the canine races, the American Kennel Club was founded. This recognized the race assigning its present name. When drawing up the standard, neither the fight nor the pits were mentioned, in order to underline the new consideration of the race, it was oriented more to the aesthetic value than to the shameful employment for which it had been originally obtained.

Tens of years of selection have rendered the American Staffordshire a stable and balanced dog, a very good companion of life. It is short-coated, clean and essential in its forms.

Dynamic and extremely sporting, it needs to wreak, several times per day, its energy in open air. Substantial dog, renowned for its courage, it is not tall on the limbs: it’s brawny and at the same time elegant with its physical bodybuilder’s figure.

It is also a good friend of the kids, with whom, in any case, it must never stay or play without the parents’ strict supervision and under its master’s direct surveillance. In spite of its medium size, it expresses great strength, always alert, vigilant and reactive. It has a rapid, elegant and powerful gait. The head is of medium length, deep through with broad skull, very evident masseteric muscles, distinct stop and short uncropped ears holding rose prick. The eyes are round and dark, the eyelids are never depigmented. 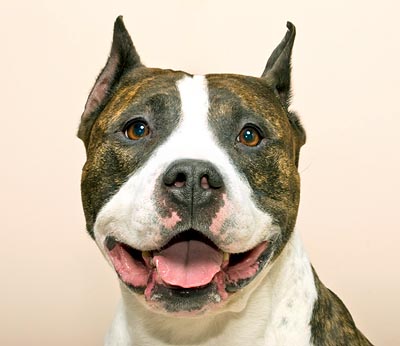 Its ancestors were the pirate Blue Paul dogs © Giuseppe Mazza

The muzzle, of medium length, is well rounded in the upper part and is rather empty under the eyes with a good gripping chop and scissor closing denture, the nose is always black.

It goes without saying that such a massive structure requires a strong and heavy neck without any dewlap, on the contrary, it is characterized by well adhering skin and is not too long: it starts broad from the shoulders and thins towards the nape leap.

The back slopes from the withers to the rump with a slight curved profile of the renal region. The thorax is broad and descendent, with front legs well spaced in order to facilitate their development. The mantle is short and bright, of a colour including all the united tints, or white dappled. In the dappled specimens, the white must not exceed the 80%. The black and tan, pure white, as well as the liver colour are not encouraged.

The height is medium and varies from 43 to 46 cm for the females and from 46 to 48 cm for the males. Faults such as the de-pigmented Dudley nose, pink or however light eyes, too long tails and denture imperfections such as the prognathism or the enogmathism are penalized.