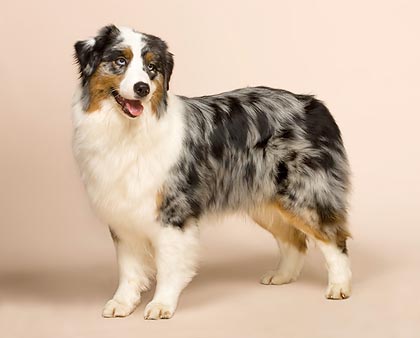 Sheepdog selected in Australia from small herding dogs already present in this country in the early 900’s : the Little blue dogs.

These ones had been imported, together with the sheep, from the Basque Country: the dogs used to guard the herds where commonly moved as “pertinence” of the herds themselves.

The lovers of this breed began a selection aimed to improve the functionalities of the herding dog: at first, they fixed the conspicuous characteristics of a herding dog, such as the intelligence and the devotion, and only after this, they concentrated on the characteristics which later on made concrete the breed under the morphologic profile.

Nowadays, in the Australian ranches, the Australian shepherds are a component of the farm life, and they go on in following the sheep with cleverness. In 1957 the fist association , called ASCA, did come to life, in order to protect and divulgate the breed. The breed was officially recognized in 1976, thanks to the work done by this club.

In its overall look, the Australian shepherd shows a solid construction, is well harmonious between head, trunk and limbs. It is a well balanced dog, with a medium length hair, the tail is truncated and is defined “bob-tailed”. Animal with a gentle character, practically never quarrelsome, it is much appreciated by those working with the ovens, thanks to its faithfulness and intelligence. 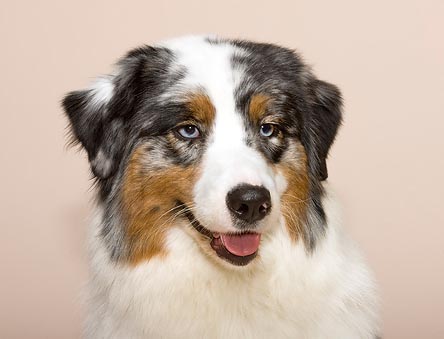 Gentle, faithful and intelligent, it was born for the Australian herds © Mazza

And to this, we have to add the fact that it is a dog which can be easily integrated into large and active families.

The sexual dimorphism sees: the female, with a more reduced height, with its 46/53 cm of height, less important than the male, which can reach the 58 cm at the withers.

The Australian shepherd has a straight dorsal line with the rump slightly bent, the thorax must reach the elbow, capacious, but not rounded. The inferior line is slightly raised.

The head holds parallel profiles between skull and muzzle, and has a neat and lean pattern. The ears are triangular and hanging. The hair has the blue merle, red merle and red, black, colours. All these with, or without, white markings and with, or without, tan points. A possible white collar must not extend beyond the withers. The white colour is accepted on the neck, on the chest and on the limbs. The white on the head must not prevail and the eyes must be surrounded by coloured zones.