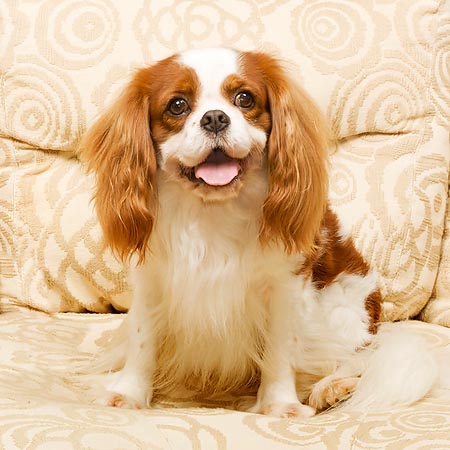 Small, but not too much, sweet and somewhat snobbish © Giuseppe Mazza

Small, but not too much, the Cavalier King Charles Spaniel is a companion spaniel characterized by a sweet and rather snobbish look, with the right balance, typical of the well centre things.

Very beautiful and not too much long coat; the snout is short but not flat; the size is not microscopic, but not even cumbersome, with a weight of about 8 kilos and a half.

The eyes are large, round and bright; the snout is full and well stuffed in the suborbital area.

The Cavalier King Charles Spaniel is a sound dog, like the hunting ones from which it descends, but is calm and balanced as it befits to a companion dog.

Its long cohabitation with the nobles in the European mansions has formed its habit to carpets, soft pillows and to the comforts: tender custom which has gone along with its lively passion for the runs in the gardens, heritage of the spaniel origins.

The breed, very difficult to raise and select, must be looked for only in qualified breeding, which can exhibit substantial palmarès: as a matter of fact the exposition awards are obtained after clearing thorough zoological checks which attest the genuineness of the results.

The Cavalier King Charles Spaniel does exist in four varieties of colour: Blenheim (white and mahogany); Tricolour (black spotted white with tan markings on eyebrows, inside ears, on cheeks and on underside of tail); Black and Tan (black with tan markings on the limbs and on the same areas as the Tricolour); and Ruby (rich reddish brown).

The ears of the Cavalier King Charles Spaniel are richly fringed, the closing of the dental arches is scissors-like shaped, the neck has a good length, the backbone is straight-lined; the thorax is capacious and the limbs are well angled. The feet are somewhat round and rich of fringes, with the typical cat foot shape. The character is gay.

The breed is native to Great Britain and is much spread in Europe and USA.