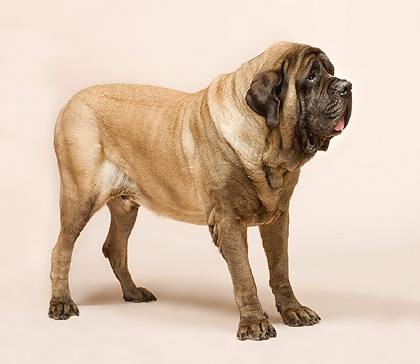 The chooser of this dog is because he wants to have a giant as friend !

Good, tranquil, almost drowsy, it can become a fury difficult to be stopped, if it must defend its master.

It gets the name from “masty”, a Saxon word meaning “powerful”. The English cynologist Mr. Edwards, wrote about it: “ the lion is to cat as the mastiff is to dog…”, while relating about this dog in the important work Cynographia Britannica in 1800.

Already existing in the British islands before Christ, they were utilized as hunting dogs for catching big animals and as war dogs.

In the Middle Ages, it became the dog of the nobles, utilized as defender of their fiefs and castles, and has reached our times thanks to the remarkable efforts done by the dog fanciers who had seen it almost extinct after World War II.

Modern breeding includes, after the dictates of the standard, specimen with a powerful structure, with compact skull and a rather squared head. Hanging lips and a trace of dewlap, an ample thorax and limbs with a strong bony framework. The angulations of the back limbs and the right perpendicularity are to be sought for.

Its size is of about 70-85 cm of height, per 80/90 Kg of weight, even if bigger specimen are not uncommon, and tonic and harmonious male specimen of 120 Kg can be found. Hair is short, of fawn, apricot, silver colour, with or without stripes. The black colour is always present on the muzzle, ears and around the eyes.