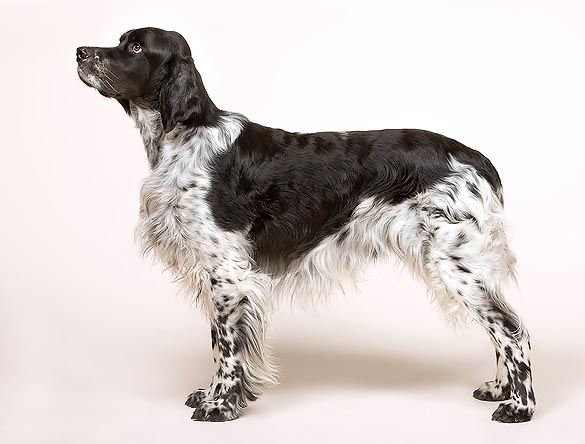 It is one of the setters breed more diffused and its origins go back to the old Spaniel that is the quail dog of the Iberian Peninsula which later on, in France, became the “chien d’oysel”, a long and silky haired dog utilized in the Middle Age when hunting with the net.

With the advent of the firearms in the XVII-XVIII century, this dog became an indispensable partner for the hunter, but it is thanks to Edward Laverack that we can talk days about the English Setter as we now know it.

It is a medium-sized dog, with rectangular trunk, long muscles and a good, but not too strong, bone structure uniting the power with the elegance of the forms.

The head is long and lean, light, the cranial-facial axes are parallel, the stop is pronounced but not sharp, the truffle is black, the set of teeth complete with scissor bite, the eyes great, expressive, of the most possible dark hazel colour, the ears low attached, hanging but without getting away from the cheeks.

The neck is well taut and robust; the back is straight, the kidney is muscular and arched. The limbs are perfectly perpendicular; the gait is easy and brisk. The tail is high inserted, big and robust at the root, carried low rather than high. The hair is thin, of silky texture, 5-6 cm long, forming fringes on the neck, the sternum region, the posterior margin of the limbs, the buttocks and on the tail; abundant undercoat only in winter.

The English Setter has a gay, sweet and lively character, never aggressive, it is very affectionate and dedicated not only to its master, but to all the family, it loves playing with the children but is also a very valuable associate, very versatile and suitable for accompanying the hunter on all grounds and for hunting whatever feathered wild animals, with a style characterized by the feline setting, crouched, which has given it the name of “seated baronet”.