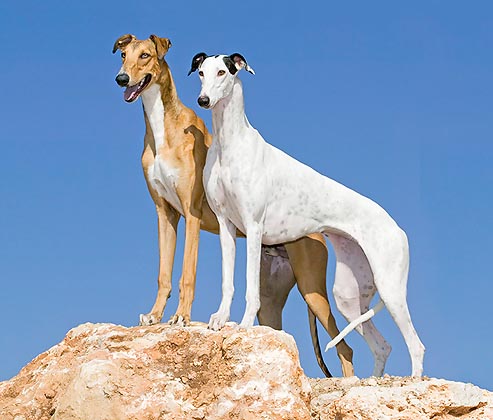 The Greyhound displays the strength and the elegance © Giuseppe Mazza

Head of a snake, neck of its relative, the dragon, feet like the cat, tail like a rat!

In this way, already in 1400, Mrs. Juliana Berners, Dog-fancier, was describing the Greyhound, with a rigmarole which still nowadays can apply to the standard of this powerful and elegant hound. The Greyhound is, without any doubt, one of the most known hounds in the world, utilized for the competitions in the race-tracks, in the sight hunting, major representative of the dog breeds on the stages of the beauty contests.

The name has probably a Greek origin: Greek hound, presumably coming from the Orient, following the Phoenicians, while transiting Greece before reaching England, it inherited this name of breed, which, later on, became Greyhound. Dog employed mainly for hunting the hare and the fox, nowadays it often finds place in other circumstances, provided that he who owns a specimen has the possibility to allow it to run and relieve its strong muscles at least thrice a week. The Greyhound is a dog with a solid structure and big distinction, it must be well-proportioned, generously muscled, its lines are symmetrical, long neck, head proudly carried, wide and solid rump, deep thorax, lean and powerful limbs. Usually, it represents the strength and the elegance.

Its morphology allows it to cover a lot of route with the slightest effort. The hair is very short and can be of different colourings, which vary from the solid colours, to the speckled and striped ones. Reserved right away, as typical of the hounds, it loves, however, the contact with the human beings, devoted and faithful to its master. Animal which usually does not present particular hereditary pathologies, but frequent exercise is indispensable for maintaining its physique condition.