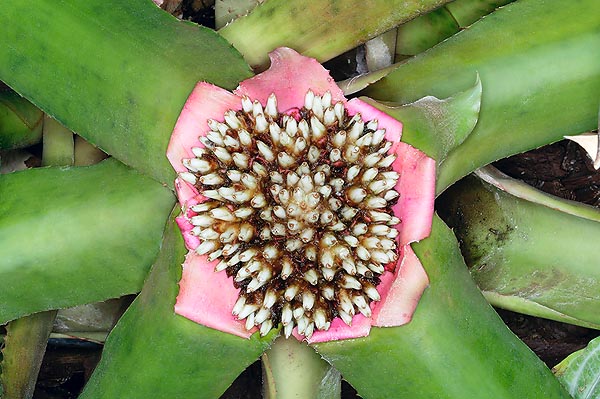 Very characteristic plant, due to the foliage, the shape and the colour of the inflorescence © G. Mazza

The Canistrum lindeni (Regel) Mez (1891)
is native to the forests of south-eastern Brazil.

The Latin name of the genus, “canistrum” = basket, refers to the shape of the inflorescence; the species is honoured to the Luxemburgian botanist, explorer and horticulturist Jean Jules Linden (1817-1898).

Evergreen, herbaceous plant, monocarpic (bearing fruit only one time during its existence), acaulescent, epiphytic, it has a funnel-shaped rosette of several pale green leaves, with small dark green dots, which form a rosette with a central cavity usually full of water; the leaves are about 50 cm long and 7-9 cm broad, with margins furnished of 3 mm long thorns.

The floral scape, at the centre of the rosette, robust and covered by a thick brown tomentum, is about 15 cm long, and ends with a 10 cm long and about 6 cm broad, thick inflorescence, formed by 80-90 flowers contained by bright pink bracts, forming a sort of cup with thorny edges. The single flowers have about 12 mm long sepals, white with a thick brown tomentum, and 15 mm long petals, white at the base and green at the apex. The fruit is a berry containing many fusiform brown seeds. It reproduces, besides by seed, also by vegetative way through the new plants coming out from axillary gemmae between the leaves and which can be detached when they have reached a dimension equal to one third of the mother plant.

Very characteristic plant, due to the foliage, the shape and the colour of the inflorescence, it is cultivable in open air, in shaded position, in the tropical and subtropical climates, both as epiphytic on the trees and for covering the soil on very aerated, porous, draining and rich of organic substance substrata. It can be cultivated, in a sheltered position, also in warm temperate climate zones, as it stands, for short time, temperatures close to the 0°C, but with frequent nebulisations during possible drought periods and high temperatures, utilizing water at room temperature and not calcareous, in order to avoid anti-aestethic dots on the leaves.

In summer, some water can be left in the central cavity formed by the rosette of leaves, renewing it frequently, thus avoiding that the same becomes a nest of larvae of mosquito, whilst in winter it is better to leave it dry, for fighting possible rottenness. It is suitable for cultivation in pot, for the decoration of slightly shaded locations, with temperatures not to be lower than 14-16°C, and with the same shrewdness foreseen for the cultivation in open spaces.