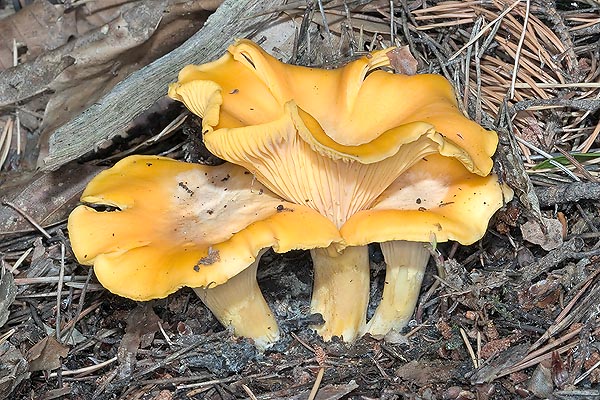 The name comes from the Latin “cibus” relevant to the food, due to its excellent quality in gastronomy.

The genus Cantharellus is characterized by carpophores with convex cap mainly in the young specimens, then depressed or funnel-shaped, with the margin more or less clearly lobed and jagged and the stem more or less central, full or hollow.

Hymenophore formed by wrinkles or small veins more or less in relief and ramified, united between them by anastomosis almost to have a reticular look. Firm flesh, elastic, fibrous, frail, with pleasant fruity smell, acidulous at times. Hyphal monomitic structure, non-amyloid spores.

Cap: 3-10 cm, convex to flattened, slightly depressed, involute margin at the beginning, then extended after quite a while, lobed, irregular, undulated; non-separable cuticle, smooth, mat, of more or less strong and uniform orange-yellow colour.

Hymenium: formed by folds, biforked and much decurrent on the stem, yellow. 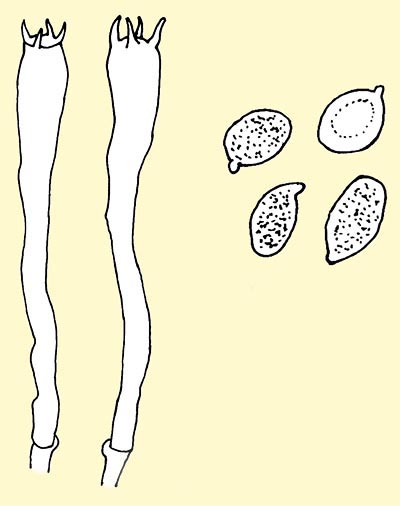 Habitat: growing from late spring to autumn, both under broad-leaved and coniferous trees, very common.

Remarks: it is, without any doubt, one of the species most sought for on the alimentary point of view; known under the following common names: “galletto, gallinaccio, giallino, finferlo (Italian), girolle, chanterelle (French), cabrilla, rebozuelo (Spanish)”.

Many varieties or forms do exist, which, by some authors, are considered as autonomous species. Cantharellus amethysteus (Quélet) Saccardo 1887, absolutely similar to Cantharellus cibarius , differs for having some violet adnate small scales on the cap and growing preferably in the beech-woods; Cantharellus ferruginascens P.D. Orton 1969, differing for its olivaceous gradations and because assuming rusty tones when touched; Cantharellus subpruinosus Eyssartier & Buyck 2001, differs for a whitish powder on the cap when young and for growing preferably under broad-leaved trees; Cantharellus bicolor Cesati 1879, differs for the whitish stem and cap, slight smell and precocious growth; Cantharellus alborufescens (Malençon) Papetti & S. Alberti 1998, is different as it has paler colours, tends to get reddish stains and is typically meridional.