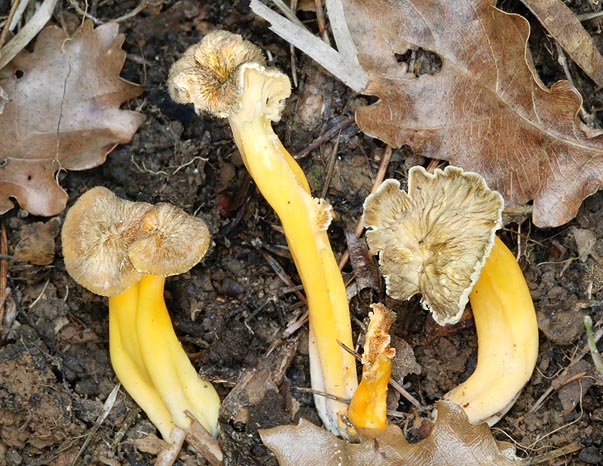 Ethymology: from the Latin word : “lutescens” = tending to yellow, I become yellow.

The genus Cantharellus is characterized by carpophores with convex cap especially in the young specimens, then depressed or funnel-shaped, with the margin more or less distinctly lobed and irregular and the stem more or less central, full or hollow.

The hymenophore is formed by folds or small veins more or less in relief and ramified, united each other by anastomosis almost to have a reticulated look. 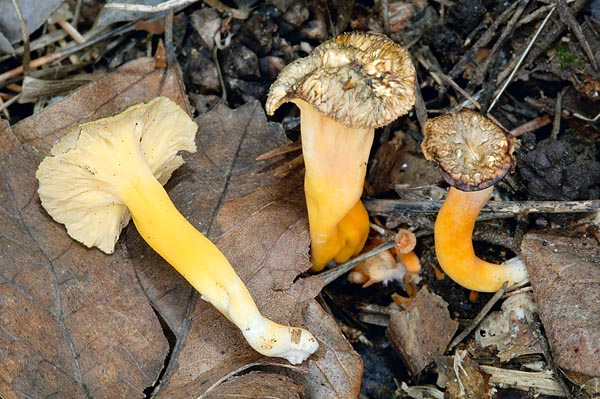 Modest size and poor yield, but choice edible because of its aroma © Giuseppe Mazza

Cap: 1,5-6 cm, initially convex, then umbilicate, strongly depressed, funnel-shaped, hollow at the centre of the cap and reaches the bottom of the stem; margin curved for long time, thin, irregularly sinuous, lobed, wavy, at times irregular. Fibrous surface of the cuticle, with radial fibrils; the colour is brown-yellow or brown-red with paler margin.

Hymenium: formed by low venations with several anastomosed ramifications, rugulose, almost indistinct at times, decurrent on the stem; the colour is yellow-red-pink or more or less dark orange.

Stem: 2-6 x 0,4-0,9 cm, irregularly rounded, compressed and longitudinally grooved, flared in the upper part and tapered below, hollow to the bottom, red-yellow, orange-yellow, with paler, almost whitish base

Habitat: very common species, present practically everywhere. It grows up from the late autumn to early winter especially in coniferous woods but also under latifolious trees, in humid locations, often between the mosses.

Edibility: Choice edible, even if of little yield, it is much sought due to its aromatic smell. 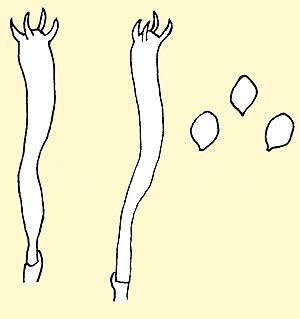 Remarks: it is a fungus growing in humid locations, especially in the coniferous woods, but it does not disdain even the latifolious ones; the biggest specimens are found in the midst of the moss, probably due to a greater humidity of the soil and a minor possibility of being found, thus having more time for growing up.

The species is characterized by a particular silhouette more or less trumpet-shaped with a more or less brown cap; the yellow stem goes almost up to the base which is white. Of this species exist some varieties and forms: the variety albidus (Bon & Pacaud) Vila, all white or just cream; the form niveipes (Schild & Wäfler) Vila, with white stem; the form luteocomus (Bogelow) Eyssartier, completely orange yellow in all the carpophore without brown shades.

A possible resemblance, due to the exiguity of the flesh, might arise with the Cantharellus tubaeformis Fries : Fries, but this one has the hymenophore formed by well evident pseudo-gills, brownish, yellowish brown colours, with the margin decolouring up to ochre, the yellowish grey flesh as a quite different smell, similar to the moss.