The plant is spread in a vast area which includes the countries bordering the Mediterranean, the Arabian peninsula, the Middle East, the Caucasus, the Indian subcontinent, Malaysia and Australia, where it grows in semi-arid coastal zones on sunny stony soils or on slopes in the crevices of calcareous rocks, up to 1.000 m of altitude, as well as in cracks of old walls.

The name of the genus comes from the Greek name of the plant “kapparis”, quoted by Theophrastus (IV century B.C.), in turn probably coming from the Arabic “kabbar”; the name of the species is the Latin name “spinosus” = thorny, with obvious reference. 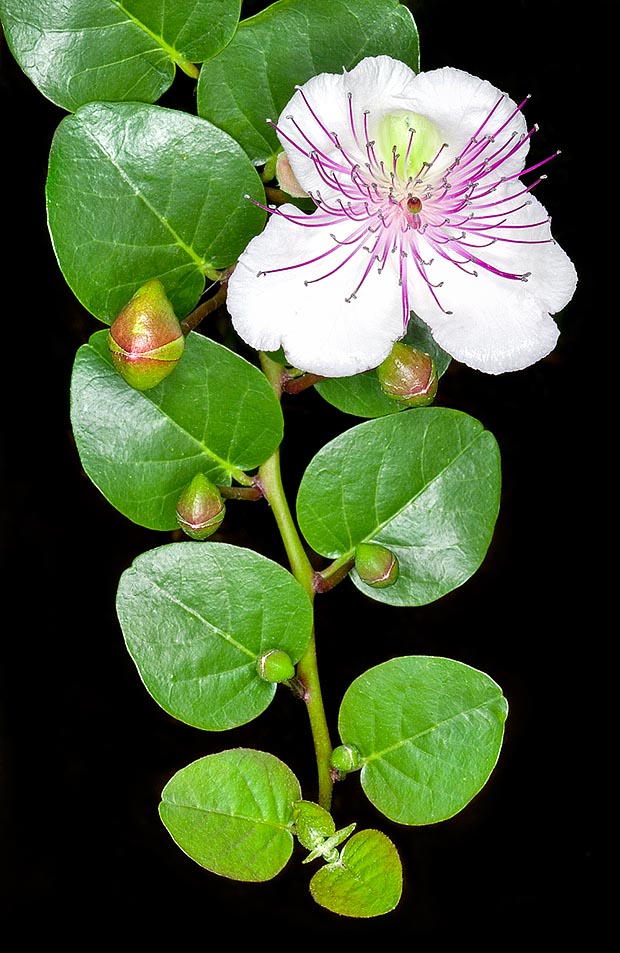 Vastly diffused from the Mediterranean region to Australia, the Caper (Capparis spinosa) is known since antiquity for its medicinal virtues and the culinary use of the buds, to harvest still closed by dawn © G. Mazza

Capparis spinosa L. (1753), much variable plant, is a suffrutex (perennial plant with woody base and herbaceous branches), cespitose, prostrate or hanging, 50-80 cm tall, deciduous or semi-deciduous, with alternate simple leaves, leathery, of an intense green colour and form from ovate to elliptical with sharp apex, about 3 cm long and 2 cm broad.

At the base of the petiole are present two curved stipular spines, rather flat, 4-5 mm long, persistent in the subsp. spinosa, absent or deciduous in the subsp. rupestris.

The flowers, with a diametre of 5-7 cm, solitary, perfumed, generate at the axil of the leaves on a 3-7 cm long peduncle, begin to open in the late afternoon and conclude their cycle in the following afternoon, have 4 sepals and 4 oblong petals, with wavy edge, of white or pink-white colour, about 3 cm long and several tens, even more than one hundred, of 3-6 cm long, violaceous-red filaments.

The fruits are ovate-oblong, dark green berries, up to about 4 cm long, containing 40-60 seeds from reniform to globular, of 3-4 mm of diameter, of a reddish-brown colour.

Plant with a copious and ornamental blooming, lasting from May to September, resistant to the winds and the saltiness, prefers sunny soils, stony, poor but draining, where few other plants might survive and where it can, therefore, constitute a small economic resource, as is the case of the cultivations of the subsp. rupestris, in the smaller Sicilian islands (in particular, Pantelleria, Lipari and Salina). Furthermore, the plant develops with the time an ample radical apparatus extending in depth, useful therefore for the stability of the ground.

As ornamental plant, it can be cultivated in open air and in full sun in areas with poor rainfalls concentrated during the winter, like those with Mediterranean climate, on alkali soils, caring particularly the drainage; it can resist both to low temperatures as low as about -8° C, at the radical level, and to the high ones, even more than 40° C. It adapts also to the cultivation in pot, possibly hanging, with the same aforementioned modalities, to be sheltered in winter, if the climate does not allow the staying in open spaces, in a luminous, dry and aerated location. In order to keep compact the plants and to help an abundant blooming, which happens only on the current year branches, a drastic pruning is to be done every winter, when the plant is resting.

The reproduction by seed as well as by cutting presents a certain difficulty. The germination of the seeds is slow with rather low average percentages; the fresh seeds are to be preferred because the dry ones have a variable dormancy period which may be interrupted, in the industrial cultivations, by dipping them in sulphuric acid appropriately diluted or by means of a cold stratification. The seeds are to be placed at a depth of 3-5 cm in a sandy substratum at a temperature of 20-22° C; as soon as they germinate, the small plants are to be placed in the most possibly luminous position, or, if this is not possible and we are in a protected environment, under artificial light, or outside in a sunny position, where the climate allows this. Also the reproduction by cutting is not easy, it is to be done in summer utilizing robust one year old herbaceous or semi-ligneous cuttings, about 8 cm long, with two leaves; the utilization of rooting hormones may increase the percentage of rooting; they are to be kept in a wet place, but without stagnating water, till when the radication happens. 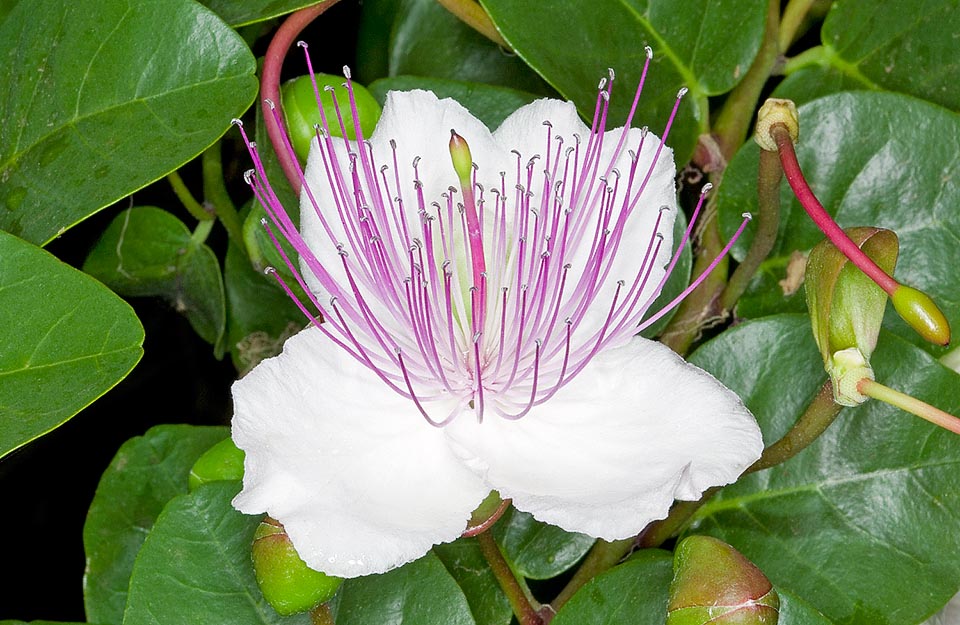 The 5-7 cm broad perfumed flowers generate on the leaves axil on a short peduncle. They open late afternoon and end their cycle on the following one © G. Mazza

In the first years of implant, until when they do not have formed a good rooting apparatus, they must receive a minimum of cares, in particular, careful watering as they are rather sensitive to the prolonged dryness. Known since ancient times, the plant supplies mainly the “caper”, which is the bud, not yet opened, at its early stage, hand-picked by dawn. At harvest, the buds are sour and have a rather unpleasant taste and smell which is lost during the exsiccation, which lasts one day, and following treatment in vinegar, or better, in salt, lasting about 40 days, during which, in a fermentation process, take form some substances (isothiocyanates) which give the known organoleptic characteristics.

The caper, with its particular aroma and the slightly spicy taste, which reminds us the mustard, is utilized for preparing sauces, in appetizers, for aromatizing meats, fishes and salads, irreplaceable component of many dishes typical of the Mediterranean cuisine; also the fruit, which has a slightly spicy taste, is utilized in the cuisine, but in a lesser extent. From ancient times, and before its culinary utilization, all the parts of the plant, which was mentioned also by Dioscorides in its “De material medica”, have been variously utilized in the traditional medicine; in it are present many active principles, among which the most abundant is the rutin, or rutinoside, a flavonoid with antioxidant, anti-inflammatory and antitumoral properties, mostly contained in the bark.

→ To appreciate the biodiversity within the CAPPARACEAE family please click here.