The species is native to Bangladesh and India where it grows in the dry forests and on the semi-arid slopes of Himalaya on mainly rocky soils, from the sea level up to about 1800 m of altitude.

The generic term is the Indian name with which are designated some species of the same genus; the specific name comes from the common one utilized in India.

The Carissa carandas L. (1767) is a sarmentose shrub or small evergreen tree with irritating milky sap, up to 5 m tall, with dichotomous branches equipped with robust simple or plurifurcate thorns, 2-4,5 cm long. The leaves, on a 0,3-0,6 cm long petiole, are simple, opposite, oblong-ovate with entire margin and mucronate or obtuse or retuse apex, 3-8 cm long and 1,5-4 cm broad, coriaceous, of glossy intense green colour above, paler and more opaque below. Inflorescences in terminal cymes, on a 1,5-2,5 cm long peduncle, bearing bisexual fragrant flowers, white or white-pink, with calyx with 5 linear lobes, 0,3-0,7 cm long, pubescent, and imbutiform corolla, with about 2 cm long tube, with 5 lanceolate lobes having pointed apex, 0,6-0,8 cm long, partially overlapped on the right. The fruits are globose to ellipsoid berries, 1,3-2,5 cm long and of 1-2 cm of diameter, initially white, pink or red, then blackish purple when ripe, containing 2-8 oblong, compressed seeds, about 0,5 cm long, immersed in a reddish pulp having a pleasant sour taste. 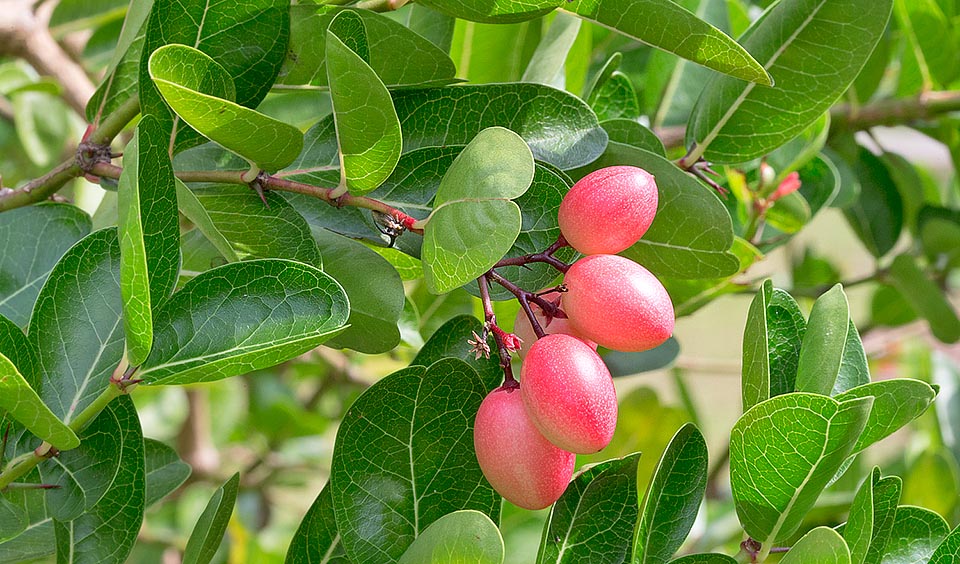 Carissa carandas is a sarmentose shrub native to Bangladesh and India. The edible, 1,5-2,5 cm long fruits are initially white, then pink, purpled and blackish when ripe. Rich of iron and of vitamin C, but must be consumed raw within 2-4 days from collection. Also leaves, bark, wood and roots hold medicinal virtues © Giuseppe Mazza

It usually reproduces by seed, in organic draining loam maintained humid at the temperature of 24-26 °C, with the first blooming on the second-third year of age, by air layering and less frequently by woody cutting, not easy to root. Species diffused in the origin areas and commonly cultivated in the tropical, subtropical and warm temperate climate zones, where it can resist to temperatures up to about -3 °C for a short time, in particular of South-East Asia. Requires an exposition in full sun, and, excepting the first times after the planting, does not need particular cares; grows in an ample variety of soils, even saline, and bears periods of drought, in any case are to be avoided water stagnations.

It is cultivated for its edible fruits rich of iron and of vitamin C, to be consumed raw within 2-4 days from the harvesting, being quickly perishable, or, thanks to the abundant presence of pectin, for preparing preserves, jellies, syrups and sweet-sour sauces. It is also utilized in parks and gardens, as isolated specimen, in group or as semi-climber leaning against trees and rails, for the foliage, the flowers and the ornamental fruits, and often for forming almost impenetrable hedgerows thanks to the long thorns.

The wood, whitish and hard, is used for fabricating small tools and common use objects; leaves, unripe as well as ripe fruits, bark, wood and roots are since remote times variously employed in the traditional medicine for various pathologies and its bioactive components are object of numerous studies.