The Distaff thistle (Carlina gummifera (L.) Less.) is a sub-Mediterranean species, amply diffused in Spain, Greece and North Africa. In Italy, it is present in the south, in Sicily and in Sardinia. It belongs to the order of the Asterales and to the family of the Asteraceae, known also as Asteraceae.

The name of the genus Carlina after some refers to Charlemagne who, inspired by an angel, should have utilized this plant to eradicate a pestilence; in a different version the emperor should have found the plant with the healing virtues by hurling his spear that should have fallen rightly on a distaff thistle. After others, the name “Carlina” should be honoured to Charles I of Spain, emperor of the Holy Roman Empire. Conversely, another, different, hypothesis suggests that “Carlina” is a corruption of “Cardina”, or of “Cardulina”, that is a diminutive of “Cardo” (thistle in Italian).

The specific name gummifera comes from the Latin “cummis” = gum and “fero” = to bring, due to the gummy contents of the root.

Untile a few years ago the plant was classified as Atractylis gummifera , in this case the name “Atractylis” comes from the Greek “atractos”, meaning spindle, distaff for spinning (in the past the stem of some species of the genus was ued for fabricating the distaffs). To the genus Carlina are attributed numerous species, the accepted ones are presently 34.

The Italian vulgar name of masticogna comes probably from the resin (gum mastic) present in the roots. In English is called Distaff thistle (distaff being the spindle for spinning) whilst the common Greek names such as agkathokollia or kollotsoure refer to the gummy contents of the root (kolla in Greek means gum). 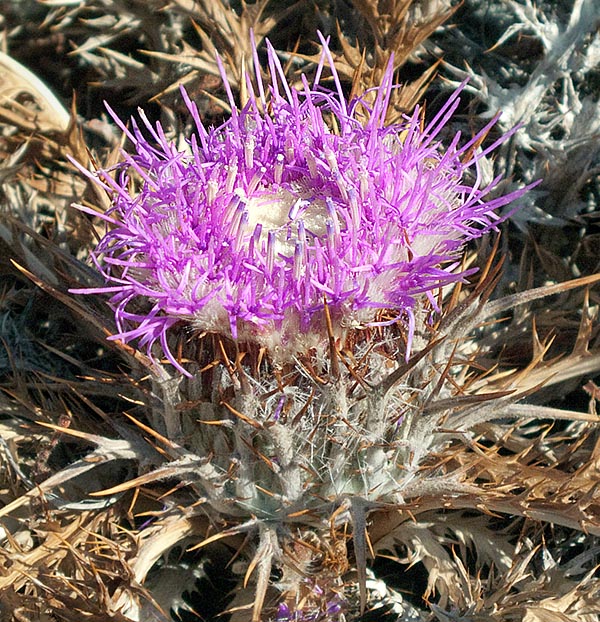 The distaff thistle is a perennial herbaceous plant, 5-20 cm tall, the big and woody root produces a sweetish, gummy and aromatic juice. Compound flower of dark pink or violet colour. The flower head is unique, of the diameter of 3-5 cm surrounded by spiny involucral leaves.

Rosette basal spiny leaves, with deep lobes amply toothed and spiny, resembling those of various species that usually are defined as thistles. It blooms from August to September, from 0 to 700 m of altitude, on the road sides, garrigues and arid locations.

The distaff thistle is a perennial herbaceous plant quite characteristic as it flowers by the end of summer, when the leaves are almost completely dried and, being substantially acaulescent, the typical flowers are found at the level of the ground.

Due to its adhesive properties the gummy resin was part of the components of some mastics; the root was used also to prepare a trap for birding in lieu of the bird lime.

Despite the known and serious toxicity, to be mainly attributed to the resin contained in the root, the plant is utilized for food purposes and in the traditional medicine.

As food, it is consumed raw or cooked, utilizing the aerial parts as well as the root that is most toxic part. The inflorescences are consumed in vaious areas of the Mediterranean, boiled and stewed: the interior cleaned of thorns and flowers, just like the artichokes or of the Carlina acaulis, with addition of garlic, parsley and in some locations also of cheese. The aerial parts are consumed, raw or cooked, also in Sardinia, in Arabia and in Spain. Whereas the toxicity stays mainly in the root, the consumption of the inflorescences or of the leaves is relatively harmless but the possible contamination of the food with parts of root renders very dangerous its consumption.

Despite the root being highly toxic, in various areas of North Africa the ashes are boiled and mixed with semolina and butter and the whole is eaten in the morning as energizing food for the day. The root, sweetish due to the resin it contains, is often chewed by the children. In the traditional medicine the resin is applied on ulcers and burns in the man as well as in the animals with often very serious outocomes. The toxicity of Carlina gummifera is very high and every year several cases of serious poisonings are reported, often with fatal outcomings. A study done in Morocco has shown that this plant represents the main death cause to be attributed to poisonings from vegetables and between the 1981 and the 2009 have been registered even 467 cases of poisoning. Several cases do occur also in other countries such as Spain, Italy and Greece. 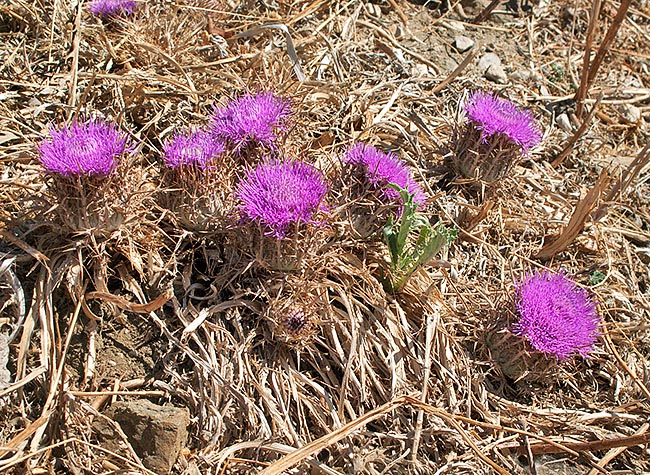 The ATP is the energy carrier indispensable for all the cellular functions, and works as a sort of rechargeable battery: enters a small organ of the cells (the mitochondrion) under form of ADP, poor of energy, to be then transformed in ATP, charged of energy, getting out from the mitochondria to carry energy to all other cellular structures.

The toxic substances of the Carlina gummifera rightly hinder the entrance/exit of the ADP/ATP in the mitochondrion and consequently prevent the synthesis of the ATP and its emission from the mitochondrion: in such way they block in the cell all the reactions requiring energy.

All cells are affected and in particular those with a very high energy requirement such as, for instance, those of the liver, of the kidney or of the brain: for this reason the intoxication involves essentially liver, kidney and neurological damages. Another cause of the dangerousness of Carlina gummifera stands in the inhibition of some important mechanisms of cell detoxification.

The poisoning due to ingestion of Carlina is extremely serious especially in the children, where it causes serious hepatitis, and numerous fatal cases have occurred. The patients show nausea, vomiting, abdominal pains, diarrhoea, anxiety, headache and convulsions, often followed by coma. There are no valid therapies except the symptomatic ones, that is the attempt to alleviate the symptoms. A therapeutic hope could come from the immunology: studies are under way to produce antibodies directed against the toxic substances of Carlina gummifera that could stop their action. It is also known a case of very serious intoxication of a 30 months old child who had been treated by the parents for a burn (see traditional veterinary uses) spreading the resin ofi Carlina on the burn. In this case the poisoning has also caused kidney damage.

One cause of poisoning is represented by the possible mistaking with other species of spiny Asteraceae. In some regions for instance the Carlina gummifera and the Centaurea ornata Willd. are traded in the markets as herbal remedies (despite the fact that the trade of the distaff thistle is forbidden). The accidental confusion between the two species has led to intoxications with fatal results.