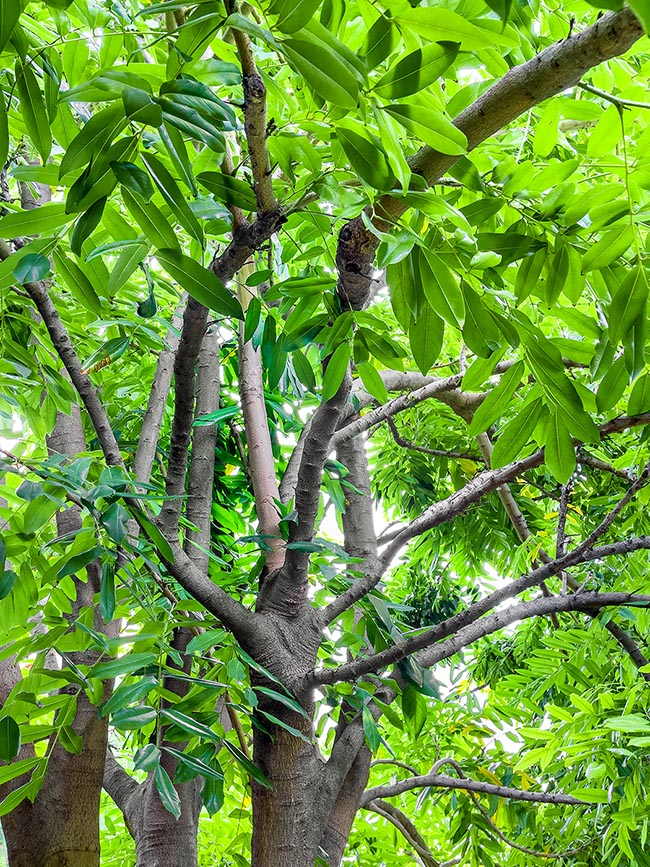 Castanospermum australe is a tree native to the coastal rainforests and the beaches of Australia, Vanuatu, New Caledonia and Papua New Guinea, from the sea level up to about 800 m of altitude, where reaches 40 m of height © Giuseppe Mazza

The Castanospermum australe A.Cunn. ex Mudie (1829) is the only species of the genus Castanospermum of the tribe Sophoreae, native to the coastal rainforests and the beaches of Australia, from New South Wales to the Iron Range, from the peninsula of Cape York, on Queensland coasts, up to 150 km west of the Bunya Mountains.

It grows on humid grounds, fertile and well drained, on terraces, on the mountain sides in the pluvial forests or along the banks of the rivers and of the water streams from the sea level up to about 800 m of altitude.

It is found also in the Pacific islands of Vanuatu, New Caledonia and on the island of New Britain (Papua New Guinea). The species has been diffused by man in India, in Africa, and in other tropical and subtropical areas of the world, mainly as ornamental plant.

The generic term Castanospermum comes from the Latin “Castanea”, chestnut and from the Greek “σπέρμα”, sperm, because the seeds resemble chestnuts due to their shape and colour. The specific epithet comes from the Latin australis, auster, austral, name of the wind coming from austral hemisphere as the species was discovered in Australia at Cooktown (New Queensland) in 1770 by the botanists Daniel Solander (1733-1782) and Joseph Banks (1743-1820).

It is an evergreen tree, up to 40 m tall, with diameter of the stem of up to 1,2 m, whose roots live in symbiosis with some bacteria of the soil, forming nodules, within which the atmospheric nitrogen is fixed to be partly utilized by the growing plant. The stem has a very dark greyish bark, slightly coarse and supports a very dense cyme due to the abundant dark green and glossy foliage. The branches display numerous and showy lenticels that ensure the gas exchanges between the internal tissues of the plant and the external environment.

The leaves are alternate, compound, imparipinnate, 20-35 cm long, with 8-17 leaflets having the entire margin, supported by 0,40-0,70 cm long petioles. The foliar laminae are elliptical, sometimes shaped oval, about 8-17 x 3-6 cm, often unequal at the base, of glossy green colour on the upper adaxial lamina.

The leaves and the branchlets are poisonous and if crushed they smell like cucumbers (Cucumis sativus L.)  or like squash (Cucurbita pepo L.). 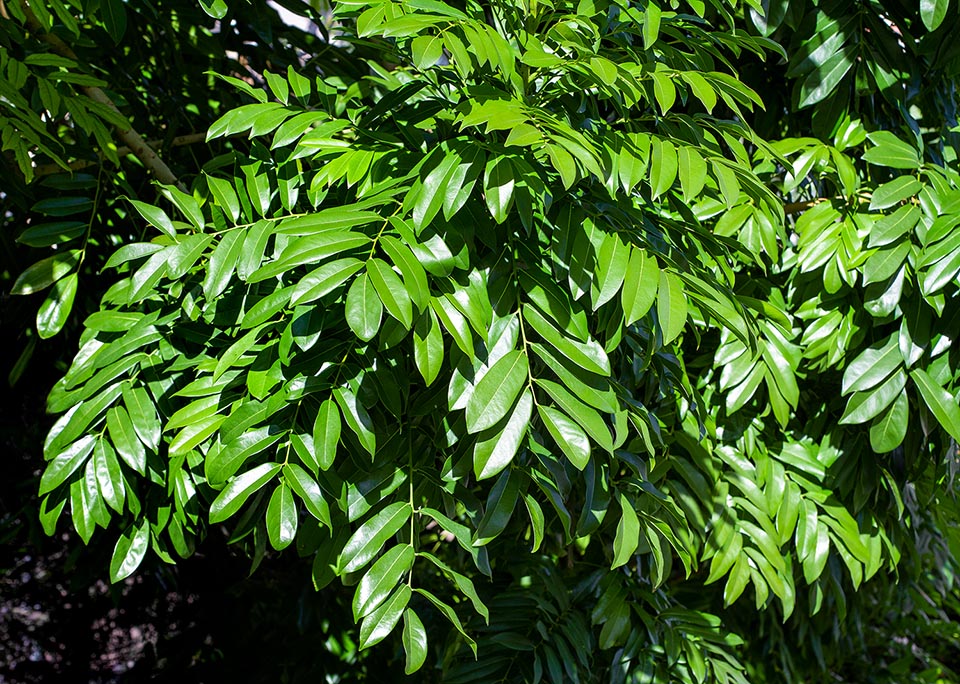 In nature, on the branches and on the stems, during the months of October-November, do appear large inflorescences, up to 15 cm long, on thin pedicels of about 2,5 cm. The 4-5 cm long flowers are very attractive and have the characteristic papilionaceous shape. The calyx is yellowish, campanulate, with 5 lobes at the apex, lightly covered by brown hairiness. The corolla is formed by coriaceous hairs, yellow, turning reddish and then intense orange when blooming is completed. The upper petal (vexillum) is lobed at the apex and measures 3-4 x 3 cm. The ovary, on an about 1,5 cm long peduncle, carries 3-4 ovules. The style is 1-2 cm long, glabrous with terminal stigma.

The flowers are rich of pollen and of nectar and in nature are pollinated by lorikeets like the Trichoglossus haematodus (Linnaeus, 1771), by butterflies and at times also by the bat named “Spectacled flying fox”  (Pteropus conspicillatus Gould, 1850), greedy of nectar. The nectar abounds and sometimes the parrots, very greedy, can get intoxicated. 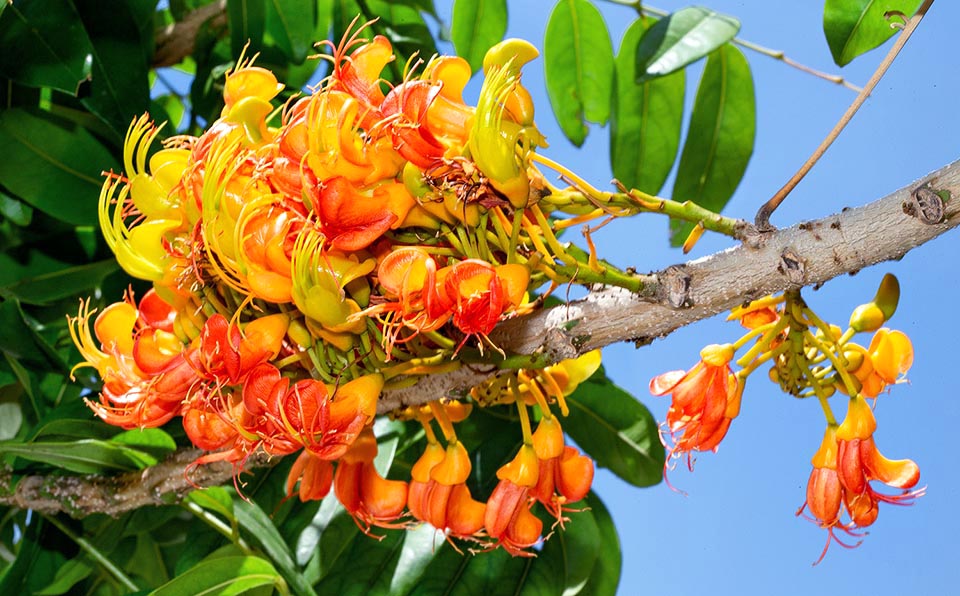 The up to 15 cm long inflorescences have showy 4-5 cm corollas. Before yellow, then red when ripe, they show the characteristic papilionaceous shape of the Fabaceae © Giuseppe Mazza

The fruits, big and woody, are 15-25 x 4-5 cm cylindrical pods and contain 3-5 round or compressed seeds, 3-5 cm long, of brown colour that take form from March to May. They are often abundantly present on the ground under the big trees. The pods can float and the exposition to the salt water does not hinder the seeds’ germination.

Recent anthropological studies have shown that the distribution range of the species has been much influenced by the prehistoric populations that, between 40.000 and 65.000 years ago, started the colonization of Australia.

This was possible, during the Pleistocene glaciations, because the Torres Strait had emerged from the sea. This occupied again the street between 12.000 and 8.000 years ago and Australia remained isolated for a long time, even if the aborigenal Australians did trade with the inhabitants of the islands of the strait. 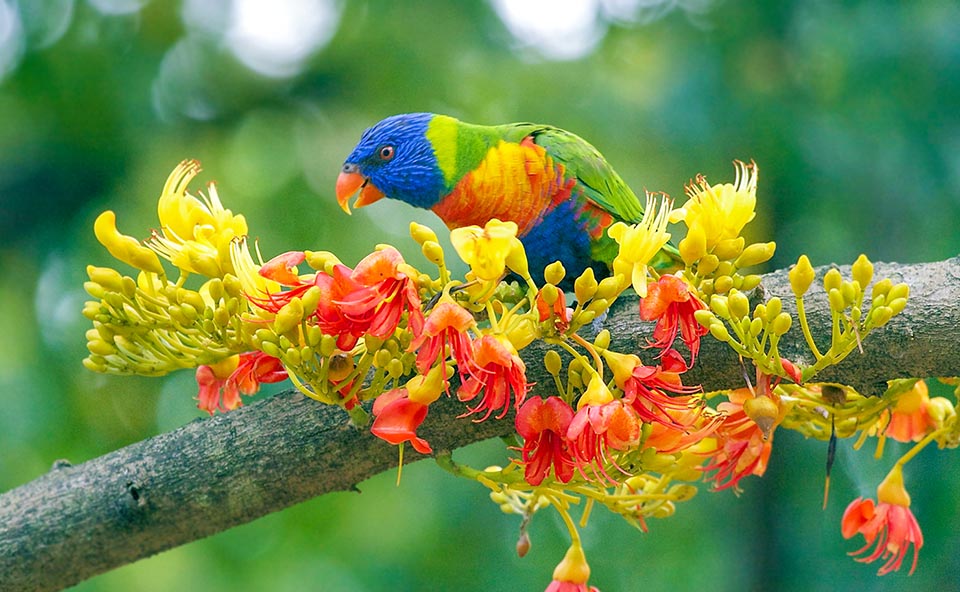 The flowers, full of nectar, attract many birds that contribute to the pollination. Here a Coconut lorikeet (Trichoglossus haematodus) © Steve Attwood

The aborigines, in their diet, made extensive use of the seeds of C. australe and often kept them underground for several months, and, quite probably, doing in this way, have been responsible for the diffusion of the species beyond its original range. This explains the current presence of this species in the northern part of New South Wales.

As the seeds are poisonous and may cause severe gastrointestinal disorders, the aborigines used them only after a particular treatment. In fact, they were cut in slices and washed in running water for several days, about ten, then roasted and crushed to make flour. As well as for its importance as food, the Black bean tree was, for these peoples, a seasonal gathering point and so it acted as catalyst for their ceremonies. Moreover, they used the bark for creating traps for fishes and animals, and the empty pods were used by the boys as toy boats. 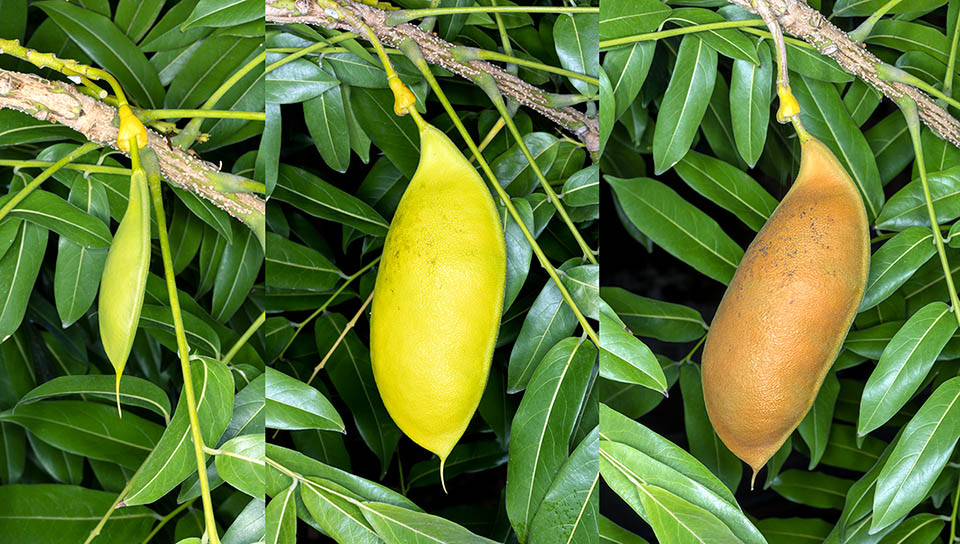 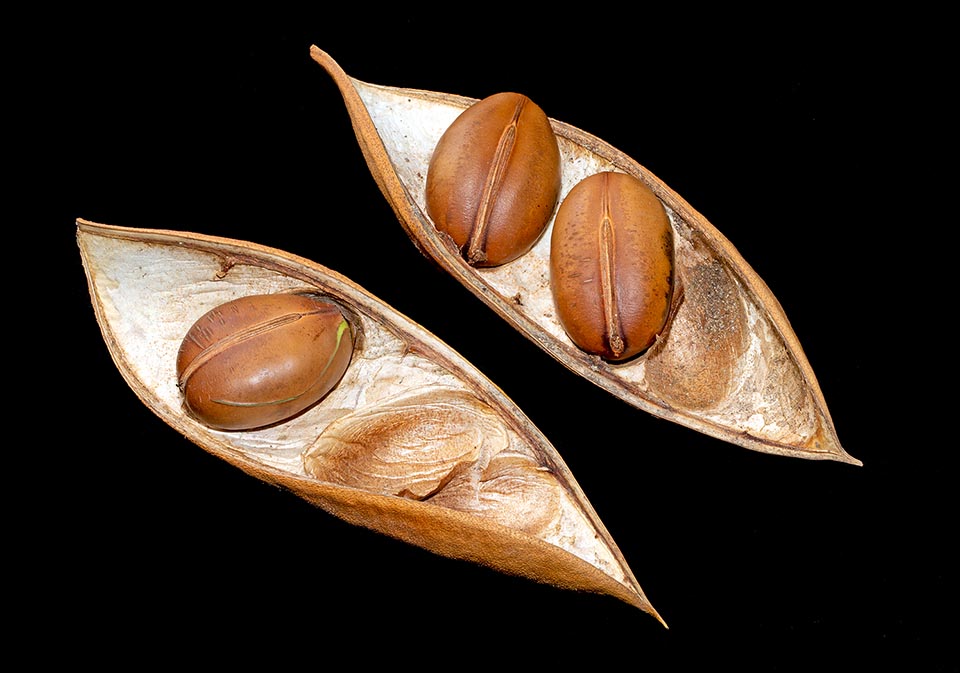 C. australe thanks to the colour of its showy inflorescences and to the shade of its cyme, is a species very utilized as an ornamental plant all over the world.

The tree produces a wood of high commercial value because it looks like the walnut tree wood, soft, fine-grained and suitable for polishing.

In cultivation, the plant develops a roundish and dense cyme reaching a height of 8-20 m with an opening of 4-8 m. Therefore, it is an ideal shade tree on roadways, parks and gardens. The extensive root system and its preference for humid soils, render it a tree useful for stabilizing the banks of the water streams, however, due to its vast root system, it should not be planted within 10 metres from pipeworks, sewers, house foundations, garages or swimming pools. 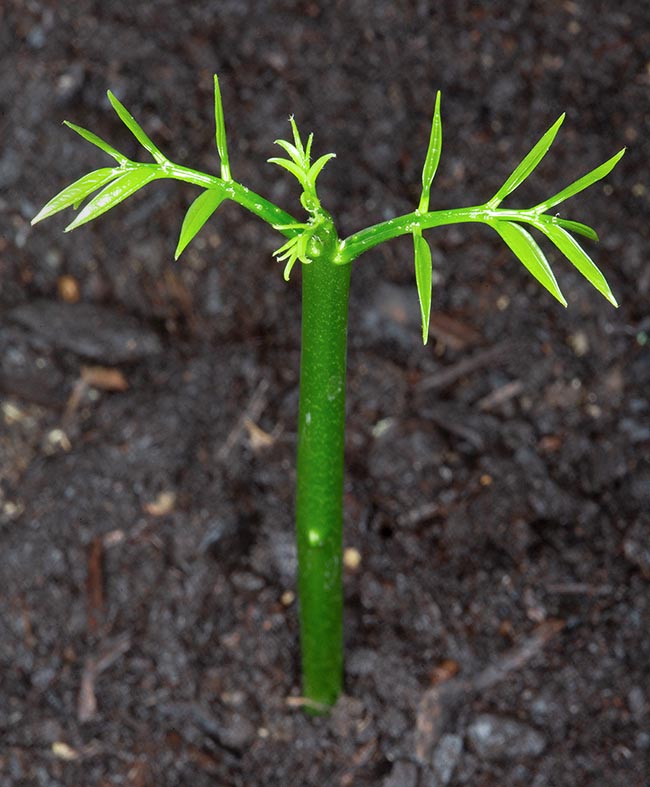 Here is one two days old. We already note the lenticels of the stem © Giuseppe Mazza

The propagation of this species is done with fresh seeds and the germination requires a temperature of 18-25 °C.

Sowing is done in single pots utilizing a mixture of three parts of river sand and one part of perlite.

After the formation of the first couples of leaves, it is necessary to perform the transplantation in a bed of well-loosened and humid soil having a slightly acidic pH.

To do mulching around the base of the plant and to water regularly.

After about three months from the transplant can be utilized a liquid fertilizer based on nitrogen, phosphorus and potassium (NPK).

As a pot plant, C. australe is a species diffused in Europe and in the Americas, but its roots must be limited in a container, in order to avoid that it grows too high.

It is an indoor plant amply available in florists and in nurseries. It tolerates the low and filtered light up to the full sun if gradually adapted.

Among the adversities we cite the possible attacks of the cochineals and of the psyllas. In order to avoid issues of such type, it is good to utilize during the winter a broad spectrum pesticide product.

Excessive irrigation is to be avoided as the same may cause rottennesses to the roots due to the outcome of fungi.

The toxicity of the plant and of its seeds comes from the poly-hydroxylic alkaloid “castanospermine”, discovered in 1981. As a matter of fact, are reported instances of poisonings of animals, horses in particular, and, at times, even of men.

However, this alkaloid holds medicinal properties as it is an acid alpha-glucosidase inhibitor, that can be utilized for fighting the “Pompe disease”, a rare neuromuscular alteration, characterized by a disorder of the glycogen metabolism that accumulates in the issues, damaging them and causing a slow and progressive weakening of the muscles.

Furthermore, it has been proven the pesticide activity of the castanospermine that prevents the adhesion of the Plasmodium falciparum Welch, 1897 (unicellular protozoan parasite causing the malaria), to the infected erythrocytes. 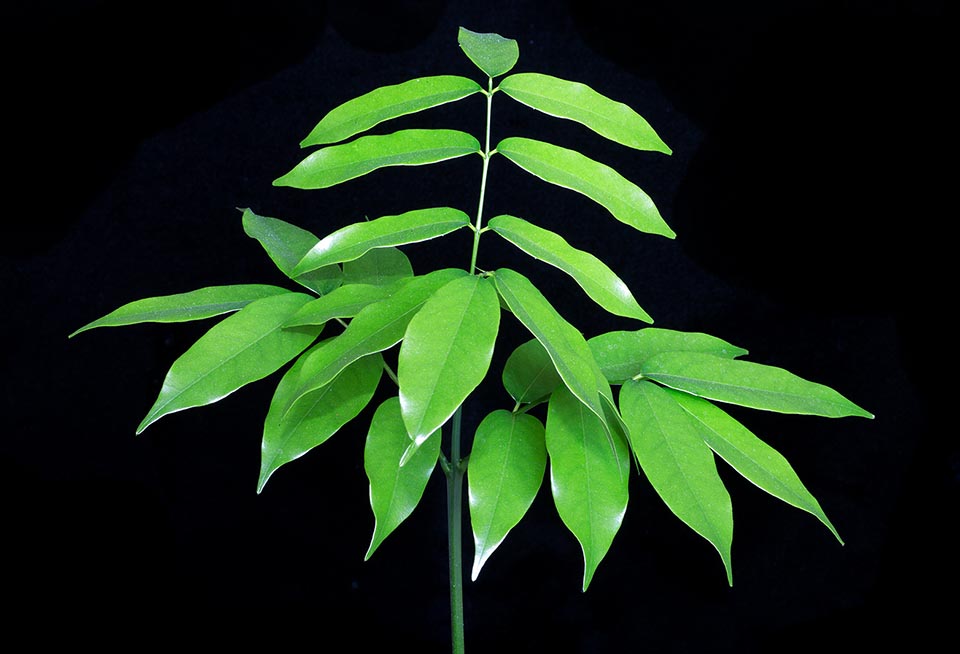 When 18 days old it already has three nice compound leaves: its small cyme. The fruits were eaten by aborigines after long preparation as all parts of the plant are poisonous. In return Castanospermum australe displays promising and important medicinal virtues for the fight against malaria, cancer and AIDS © Giuseppe Mazza

Recent studies have shown that the castanospermine has inhibitory activities of the beta-glucosidase and that proves promising in the struggle against cancer as well as the Acquired Immundeficiency Syndrome (AIDS). Finally, C. australe is a natural resource of therapeutic, alternative or interactive drugs in the synthesis products, also for treating analgesic or inflammatory diseases.