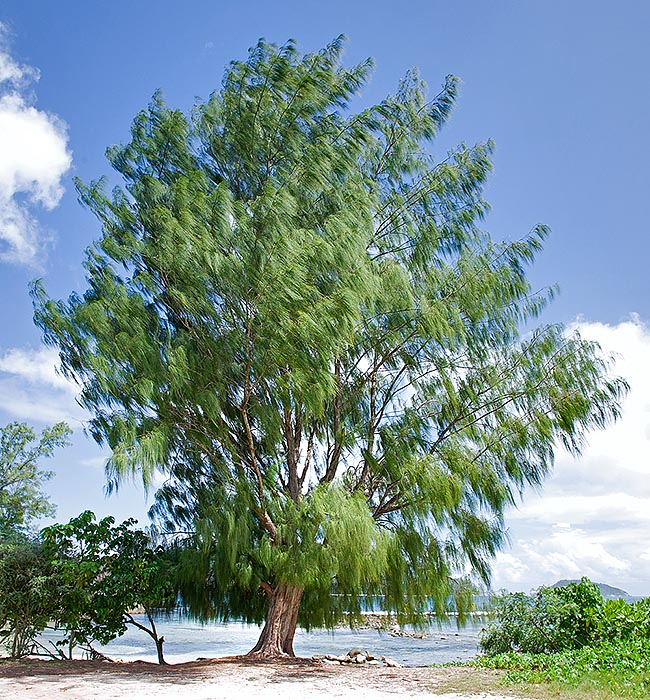 Native to Australia and South-East Asia, the Casuarina equisetifolia can be 30 m tall, with even 1 m broad trunk. Fast growth, very decorative crown waving in the wind, resistant to saltiness and to short thermal drops to around 0 °C. The bark is locally employed in the traditional medicine of the Pacific Ocean islands © Giuseppe Mazza

The generic name comes from Casuarius casuarius, southern cassowary, bird of Australia and New Guinea whose feathers remind the drooping branches of the species belonging to the genus; the specific one is the combination of the genus Equisetum and of the Latin substantive “folium” = leaf, with obvious reference.

The Casuarina equisetifolia L. (1759) is an evergreen monoecious tree, 20-30 m tall, with erect trunk of up to 1 m of diameter, provided at the base of tabular roots (flat roots similar to buttresses), with initially smooth bark, then wrinkled and deeply grooved with the age; the roots are capable to fix the atmospheric nitrogen through the radical nodules (actinorhizas) formed by bacteria belonging to the genus Frankia Brunchorst (1866).

The crown is formed by drooping filiform branchlets; 20-35 cm long and of 0,5-0,8 mm of diameter, finely grooved, green, that perform the chlorophyll function, with 0,6-1 cm long articles ending in leaves reduced to tiny triangular leaves, 0,5-1 mm long, arranged in verticils of 6-9. 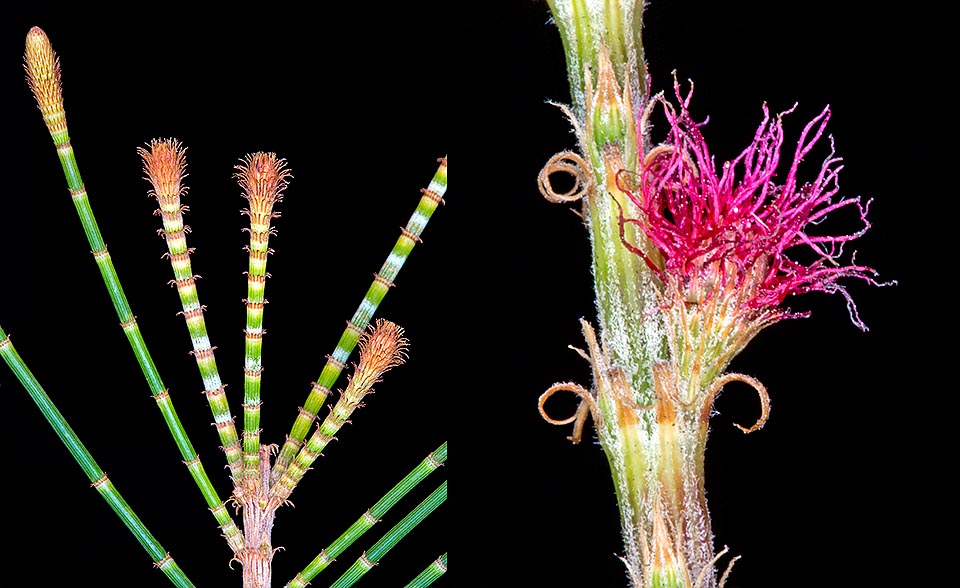 The crown is formed by odd green filiform branchlets that perform the chlorophylle function. Some are persistent and will form the wood, other deciduous. The unisexual male inflorescences are spikes growing at the apex of the green branchlets; the female ones, purple red, grow on a short peduncle from the woody branchlets © Mazza

Unisexual inflorescences on the same individual, the male ones are 0,6-5 cm long spikes, placed at the extremity of the branchlets with flowers formed by two bracteoles and one stamen, the female ones, laterally to the lignified branchlets on a short peduncle, are globose capitula, 1-2 cm long and of 0,8-1,2 cm of diameter, with flowers, without corolla, subtended by one bract and two bracteoles.

Woody infructescence, similar to the cones of the conifers, about 2 cm long, formed by the bracteoles that when ripe open to free the fruits, about 0,6 cm long oval samarae. 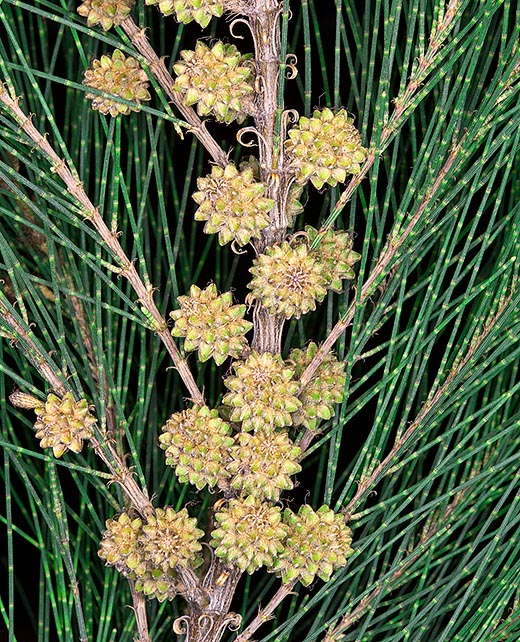 Usually it propagates by seed, that has a short-lasting germinability, if not duly conserved, previously kept humid in water for one day, in sandy loam maintained humid at the temperature of 25-28 °C, with germination times of 2-4 weeks; it reproduces also by cutting and air layering.

If planted outside the origin areas the soil should be inoculated with chopped nodules where are present the nitrogen fixing bacteria.

Species of remarkable ambiental and economic importance for many tropical and subtropical regions, capable to bear extreme climatic and environmental conditions, from the semidesert inner areas to the coastal dunes, where it tolerates very well the marine aerosols, to the banks of the waterways, in regions having an annual rainfall going from 200 mm to more than 4000 mm.

Cultivable also in milder temperate-warm climate zones where it can bear for short times temperatures up to about -3 °C. It requires full sun and adapts to various typologies of soil, even very poor, sandy or rocky, acidic to ultrabasic, where should not be possible other profitable cultivations, enriching the same thanks to the capacity of the roots to fix the atmospheric nitrogen.

Fast growing, it can exceed, in the best cultivation conditions, the 10 m of height in 5 years, is therefore utilized in reforestation of degraded areas, in the erosion control, the stabilization of the coastal dunes and as windbreaker. Due to the particular landscape and ornamental characteristics it is often employed in parks and gardens and in the street trees. The wood, reddish brown, particularly hard and heavy, lasting and resistant to the xylophagous insects, but quite difficult to work, is used in the construction of dwellings, of boats, for poles, tools and common use objects. Due to the excellent heating power (20,7 MJ/kg) and poor presence of ash is utilized directly as fuel and for producing charcoal, for this reason the tree is widely cultivated in some regions of India. The bark is used in the traditional medicine of the Pacific Ocean islands for various pathologies.